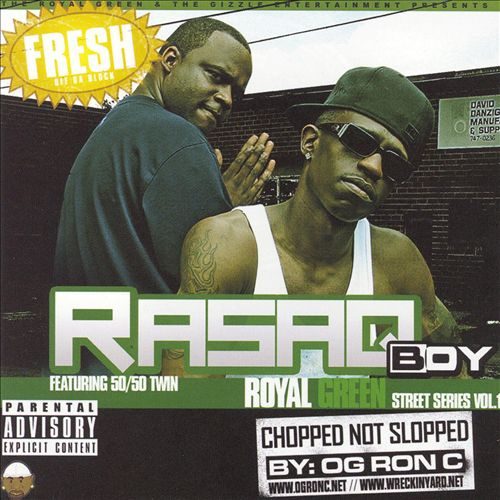 In an innocently curious or perhaps shrewdly clever move, the writer(s) of the press release for Rasaq’s newest project put off the fact that Houston native Rasaq is, coincidently, the brother of recent national star Chamillionaire, whose success has largely been created as a result of riding a wave of past associations. Seriously, is it just me or do aspiring rappers need 6 degrees of separation or less to either Jay-Z or 50 in order to have any hope of getting on these days? But don’t get it twisted: I’m 95% sure that Rasaq has the opportunity to release this project solely because his brother is who he is. That’s fine until you realize all the reasons why he didn’t get the opportunity: not because of any distinguished talent as an MC, or because of any innovative styles, or even because he has anything remotely interesting to say. Because by and large, he lacks all of those things, making this release (which fortunately or unfortunately enough features the supposed star of the proceedings prominently on only 6(!) of the 16 tracks) largely a historical oddity, revealing less about the talent of a young rhymer-in-waiting than about the fucked of industry politricks that allows such a mundane and talentless MC to get such a large platform for expression, while thousands of other (more talented) cats get shut out of the game on the regular.

On Rasaq’s first verse of the first song offa “Royal Green,” I checked off every generic subject matter currently infesting southern rap: crack, weed, cars, grills, money, more cars, more grills and more money. What I didn’t notice in all of this, however, was even one interesting line, metaphor or detail. Technically, Rasaq (judging from the relatively few times he actually spits a verse, as opposed to his endless end-song rants to visit his various websites and phone lines) is less-than-excellent, so it’s hard to say what lacks more, his style and delivery or his subject matter. Let’s just say the absolute mediocrity is palpable.

Beat-wise, things are improved as there’s plenty of current and recently-current southern bangers, full of that familiar-yet-satisfying mix of trunk-rattling bass, daunting organs and skittering 808 strip-club beats. Problem is, because Rasaq (as mentioned above) is only actually performing on six tracks (although as mentioned above he does pop up at the end of the other songs to alternately and artlessly pimp his company), the rest of the tape is filled in with mostly satisfying (but, shamelessly, previously released) tracks from other southern favorites. And while it’s nice to hear legends like 8 Ball and MJG, 36 Mafia and Pimp C in full form, all their songs are featured on their own latest releases. Other “guests” include Snoop and Cube (“Go to Church”), Lil Wayne and Baby (“Stuntin Like my Daddy”), and Dem Franchise Boys (with the nauseatingly one-dimensional “Ridin Rims,” about, yep, rims). Which makes this mixtape (which is advertised as “Chopped not Slopped” by OG Ron C, despite a noticeable lack of any behind-the-board alterations) far from essential. Possible explanations for the extreme padding of the disc (which isn’t even that long): a.) Rasaq was unsure he had the necessary star-power as of yet to attract people to his product, so he enlisted big names mainly with the help of his brother; b.) Rasaq only has the ability to craft a handful of utterly forgettable joints, thus needing songs from somewhere to fill his mixtape up with. Personally I’m going with the latter hypothesis.

After stating that “Royal Green” features a bunch of popular southern MCs and decent production value, I will also state this: the lack of inspiration I found within it is both mind-blowing and depressing. If we as fans (and I do count myself a huge fan of quality southern Hip-Hop) are satisfied to keep supporting products and artists as crass, exploitative and creatively bankrupt as “Royal Green” and Rasaq, then fuck Hip-Hop, it doesn’t deserve to grow.