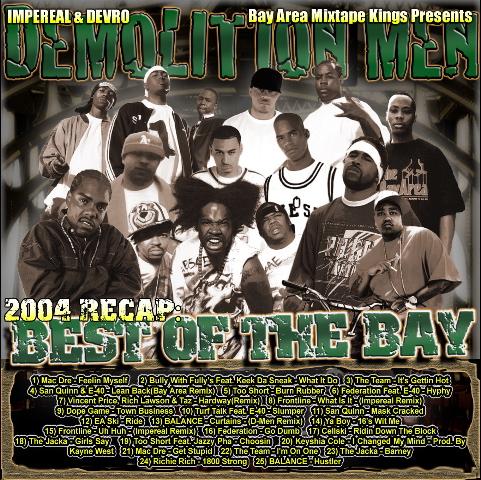 I still remember copping my first mixtape years ago. It was a bootleg of a bootleg of a bootleg DJ Clue mixtape, dubbed on cassette by one of my boys. It featured real exclusives, including some dope Nore and Cam’Ron tracks months before their albums hit stores. Of course, back then mixtapes were hard to cop unless you were from a big city on the east coast. Even mixtape websites were quickly raided and shut down by the feds during those early years. Nowadays, you can order any mixtape at the click of a button and even major retailers are getting conned into selling the popular bootlegs. This explosion of the bootleg has led to an overcrowding of the market and has dropped the quality of most mixtapes to close to zero. The most damaging effect of this trend is that those tapes actually worth the money get lost amongst the 300 DJs all touting the same exclusives and generic “freestyles.” Among those tapes worth purchasing is Demolition Men’s “Best of the Bay.”

DJs churn out “Best of” mixtapes more often than the average bowel movement. Some cats even get “Best of” tapes without a proper album release, which is ridiculous. Rather than concern themselves with the latest rap star or hot mixtape rapper, the Demolition Men decided to give the Bay area the “Best of” treatment for 2004 and the result is stellar. For those even vaguely familiar with Bay area rap, the process of keeping up with the Bay is damn near impossible. Not only must you peep for your favorite vets, but you also have to keep an eye out for young â€˜uns, all the while trying to sort out what’s really official, new, and actually worth your hard earned dough. Thankfully the Demolition Men do all the work for you on their mixtape and lace you with 25 of the Bay’s best tracks from the last year.

While the title might turn off those not into the funked out vibe of the Bay, be assured that the album includes something from everybody. Tracks like “Slumper” by Turf Talk and “Hyphy” by The Federation made noise outside of Cali. San Quinn and E-40 show up for “Lean Back (Bay Area Remix),” giving the summer banger their unique twist. Everyone’s favorite pimp, Too Short, shows up twice with the latest hits off his last album. Even Kanye West shows up, producing Keyshia Cole’s “I Changed My Mind.”

Those looking for that signature Bay area sound, everyone from new jacks to vets are nicely represented. Mac Dre has two tracks off his “Ronald Dregan” album. We’re also treated to the two tracks from The Jacka with the infectious feel-good vibe of “Girls Say” and the hustler’s lament, “Barney.” E-40 shows up twice on the aforementioned “Slumper” and “Hyphy.” Keak The Sneak provides us with his Bay area version of “Freek-A-Leek,” but rather than cater to the ladies, Keak drops the bass a few levels and shouts out his hood on “Town Business.” San Quinn’s “Mask Cracked” is a great inclusion as it’s equal parts gangsta and party. The only glaring omissions among the vets are JT and Messy Marv, but they both released very little work in 2004.

The new jacks also rep hard with knocking club tracks. The Team’s “It’s Gettin’ Hot” and “I’m on One” are some of the best party joints in recent times, with pounding bass and catchy melodies. Frontline also rep nicely as a group, with party tracks on “What Is It” and “Uh Huh.” Highly touted rookie, Balance, shows up twice with a more east-coast influenced lyrical approach on “Curtains” and “Hustler.”

“Best of the Bay” is one of the best mixtapes to come out in recent times. Aside from being masters at putting together tracks, the Demolition Men also add their own unique flair by remixing a few of the tracks with more well-known beats. Add to all this the fact that the tracks are mixed well and mastered well (meaning you won’t have to worry about blowing out your speakers or subs) and you have a very high quality product. “Best of the Bay” is a must have for any Bay area fan. Its price also makes it the perfect investment for those who are tired of hearing people like me praise the Bay and want to find out what all the fuss is about first hand.