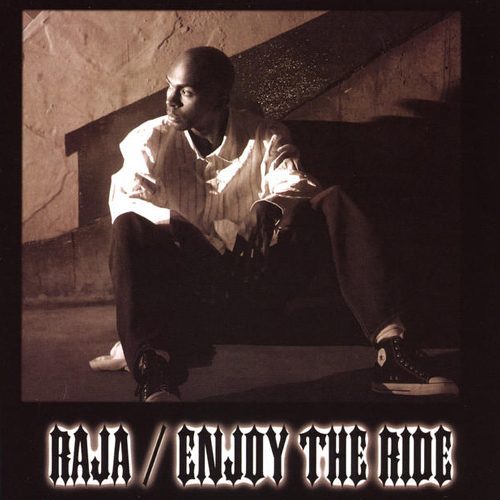 “Enjoy the Ride” is possibly the most fitting and appropriate album title in hip hop since Sage Francis’ “Personal Journals.” “Enjoy the Ride” not only accurately describes the vibe and concept of the album, but acts as the backbone for all of Raja’s lyrics. Over supremely laid-back tracks, Raja lays down his personal raps, all centered upon describing and appreciating the “Ride” of his life.

“Ink in my pen, handkerchief in my breast pocket
Mouth shooting off like a test rocket
Some stress profits and cut corners
Me, I’m up on ya, with the hunger of a bench warmer
See me turn around, etch me in the sun
See me secure, watch me kick the drum
Bang to the boogie, got the freshness of a rookie
But the wisdom of a vet”

The production of “Enjoy the Ride” is amazingly light and laid back for a rap album. It’s pretty consistent, but it also flirts with the fine line of being relaxing and boring. The light, airy drum beats are usually accompanied by one or two other instruments/sounds, and it produces a very ethereal feel. In other words, it’s an album that’s good to smoke weed to. Even sober though, the beats are a nice change from the power of most hip hop music.

The biggest problem this album has is Raja’s vocalism. Musically, the album has a very melodic sound, and Raja isn’t always in sync with it. He attempts to handle the hooks, and, for the most part, fails badly to keep the album rolling. Songs like “Fresh Air” and “Ride With You” benefit greatly from having a singer handle the chorus; they generally have a better grasp of the rhythm than he does. When he’s rapping, it’s hit and miss sonically. He has a slur in his voice that causes him to lose the beat occasionally. His standard rapping tempo is too inconsistent, and doesn’t have a good sense of rhythm.

However, when he makes a departure from his normal flow, the results are very good. He heads an on-beat, off-beat delivery spot on with the clever “Backwards,” which is also one of the few tracks where his hook works. His only misstep in experimenting, the sonically unpleasant “Red Skies,” is the low point of the album, but most of his side-steps work. It’s when he settles into a pattern that he’s at his weakest, and that, unfortunately, makes up about half of the CD.

Lyrically, Raja is slightly above average. He’ll never blow the listener away, but his verses are generally well written, if occasionally too marijuana-influenced. Their strength lies in that they blend into the background with the rest of the CD. Raja is a mostly positive rapper; he takes his experiences and emotions, looks at them honestly, and puts them into a positive perspective. Even when his lyrics aren’t very well written, there’s a simple pleasure in listening to them. Generally, they fit the music like a glove, unassuming, but well done in their own, quiet way. And that is both the strength and the downfall of “Enjoy Your Ride”: it’s nice to listen to, but it doesn’t particularly stand out. If you have in your collection, you’ll most likely enjoy it as a change of pace every once and a while. But there’s really no reason to go out of your way to buy it. It’s nice to play in the background, not paying attention, but it’s never any more than that.