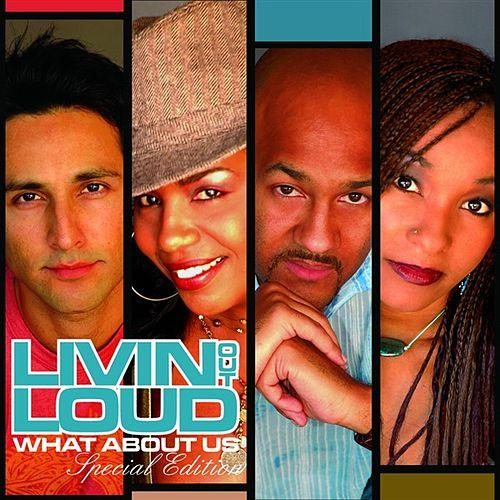 Livin Out Loud :: What About Us

Unlike most groups tailor-made for mainstream success, Livin Out Loud thankfully don’t resemble any of the staling cookie cutter shapes dominating airwaves today (Christmas star and the happy gingerbread man included). Call it an old school throwback or a nightmarish blend of urban elements, the five-piece is four parts R&B and one part emcee, specializing mainly in the kind of squeaky clean soul that dominated early 90’s radio.

As sing-songy as their debut “What About Us” may be, it’s definitely still hip-hop (hell, we’ve covered Gnarls Barkley and Kelis, haven’t we?). But even in making this qualification, the album becomes especially flawed. The biggest problem is not in the quality of the raps, but rather their very existence. The R&B, sung by Reuben and Sylvia MacCalla, Lisa LaShawn and J. Martini, is polished, and simply dominates the album, taking up the vast majority of the 56 minutes. Once the rapping actually starts, it’s like the nice guy trying to get attention at a party he wasn’t even invited to. At least you know when it’s coming – damn near every verse is preceded by a pealing “YEEEAH,” sometimes followed by the rapper’s moniker, sometimes followed by another “YEEEAH.”

Oddly enough, the rapping is actually half decent. Emcee Crisis (not to be confused with the Justus league producer) can tell a street tale, but I don’t know if I was entertained as much as I was just shocked that his rhymes didn’t suck. Stranger still, his credibility works against the group even more; hard-nosed spitting and tender ballads? The pieces hardly fit.

As disorganized as I make it sound, it really isn’t. The R&B and raps rarely share the stage together with any sort of chemistry, but it’s very far from the orgy-that-invited-too-many-losers that was Diddy’s Da Band. We all know how that turned out.

“What About Us” is definitely soulful and at times musically impressive, especially considering no samples are used. Yes, folks – a hip-hop/R&B record with decent original melodies. Credit may be due to an outside writing staff? I’m not sure, but Livin Out Loud sound professional without sounding cliched. “Brokeazz” is infinitely more interesting (and honest) than the fantasy R&B porno’s and glam rap horror shows intoxicating the scene lately, and an updated version of the child’s song “You Are My Sunshine” is surprisingly smooth as silk and a shit-myself-at-the-prom embarrassing pleasure.

There are several missteps and over 15 tracks, a good deal of filler. Songs like “Make Me Move” have crossover potential with sung verses that are actually pretty nice, but yucky, stinking choruses hardly suited for your next boy band. Interestingly enough, Livin Out Loud get increasingly N’Sync on your ass as the album develops. Take it how you want it – we’d all take Justin Timberlake over D4L anyway.

Livin Out Loud :: What About Us
5.5Overall Score
Music6.5
Lyrics5