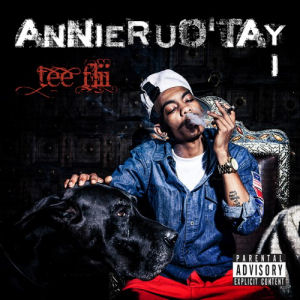 South Central’s own TeeFlii first came on the scene in David LaChappelle’s “Rize,” a documentary about krumping. His dance skills also got him a spot in “Stomp the Yard,” as well as some choreography work. He’s spent the last few years writing and recording his take on R&B, which he likes to call “Flii&B.” Flii’s family is rooted in gospel music, and while he sang gospel as a kid there is nothing holy about the ratchet-ass R&B that he makes.

“AnnieRUO’Tay” is the first of two mixtapes Flii has released. Both are concept albums about seducing a hottie with a big booty in the VIP room of a club while drinking champagne and popping molly. Yes, that’s right, TeeFlii has released TWO concept albums about hooking up in the club. That may seem a little unambitious given that most concept albums are about grander things like, say, a deaf dumb and blind kid who loves pinball and is taken as the Messiah, or a runaway who becomes a hare krishna, or a murdered drug dealer who comes back as a zombie, or Deltron’s fight against corporations in 3030 (The Who’s “Tommy,” Husker Du’s “Zen Arcade,” Lupe Fiasco’s “The Cool” and Deltron 3030, respectively). But hey, if DOOM can make an album about food, and Kool Keith can make an album about having sex, why not make two mixtapes about getting drunk and getting laid?

The song titles tell the story: TeeFlii shows up in the club looking for Annies, slang for bad girls with big butts. He announces “I’m On.” He begins having sex in the club with “Groupies.” Things are getting “Ratchet” as the “Bands Play,” and one of the annies has to “Take 1 for the Team” on the “Furniture,” which gets a “Standing Ovation.” Since the girls “Like Me,” the “Girl Strip” in the “VIP Section” and “Celebrate” getting “Nasty” on the “Table.” It ends with “Think of U” and “Get That Shit For Me Annie.” Basically, it’s a porno set to music. Every song is exactly what the title suggests, and some of them are so crude that they are unintentionally funny.

Flii has a nice voice that he only slightly modifies with Auto-Tune. Even under the metallic tinge you can tell that the man can sing. He belongs to the tradition of R&B singers who use their sweet voices to sing nasty lyrics, and the lyrics on “AnnieRUO’Tay” are as nasty and ratchet as the girls TeeFlii is singing about. Much of the appeal of TeeFlii is the contrast between his heartfelt singing and his raunchy lyrics.

What sells “AnnieRUO’Tay” is TeeFlii’s unwavering sincerity. He commits to his songs 100%, singing his x-rated lines as if he’s proposing marriage. On top of this, he actually seems to care about the women he’s singing about. His Twitter account (https://twitter.com/teeflii) gives a shout-out to his daughter, so you get the idea that he’s not your average misogynist. Sure, he’s a dog who loves to have sex with groupies, but he truly cares about each and every groupie he gets with in the VIP area. Even the fact that he refers to women as annies instead of bitches is at least some sign of respect. Plus, he’s equal opportunity: as long as the woman has a big ass, he doesn’t care if they are black, asian, white, or latina.

He’s backed by solid production by DJ Mustard, Futuristicks, 1500 or Nothin, Larry Berry, and himself. Most of the beats are built around 808s, snaps, and handclaps. Mustard has hit gold with that formula for YG and Tyga, two artists not known for deep or intense lyricism. Skeme, Problem, Oley, Twinn, Nipsey Hussle, Lil C, Bad Lucc, CoolRoy and FatBoxx all give verses, but none of them outshine TeeFlii. Somehow his singing manages to make the douchiest of lines sound ok. “We gonna drink this champagne/And we gonna throw this money around,” comes off like poetry in TeeFlii’s hands.

“AnnieRUO’Tay” may not be the most morally defensible concept album, but it is enjoyable. TeeFlii manages to make being nasty sound not just fun, but noble. TeeFlii manages to walk the line between hip-hop and R&B, raunch and romance, hedonism and genuine emotion, and make it all sound believable. His debut album is set to drop on the 4th of July, and given his talents as a singer, producer, and dancer, he may be set for much bigger things.