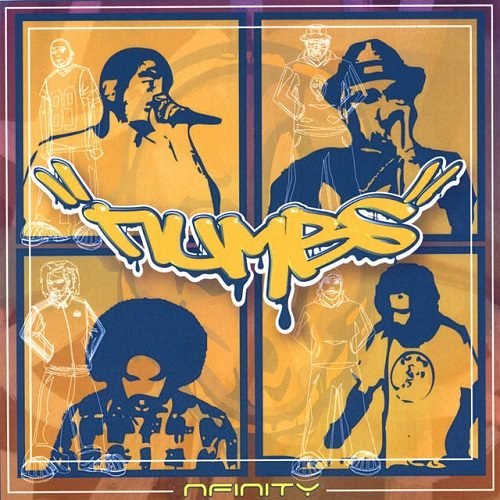 There seems to be a difference in opinion here, but after all opinions are what this criticism game is all about. The members of this Salt Lake City group, Numbs, consist of; Gunnar McKell, Mark Dago, Rooster and DJ Shanty, but that won’t really matter. Apparently, they (or their record label, Earth Burn Music) think that this, their 4th release (second on CD ) entitled “Nfinity” is a solid classic as per their press release. How they are wrong, let me count the ways…

Aside from the fact that they’re from Salt Lake City, Numbs seem to at least have their Hip-Hop image in order. The cover of “Nfinity” is a Warhol-esqe picture of each member of the group, which shows two different MC’s clutching the mic, another working the boards and finally one more member donning the afro-cut. The letters that spell out the name “Numbs” ooze down like streaking spray paint. Straight Hip-Hop, eh? It all seems pretty good until they actually start the musical process.

The first track is “Heavy Handed” and the listener will immediately come to the realization that all of these emcee’s are not only expendable, they’re nearly intolerable. In the track they state, “We drop those hits that make your ears go numb!” and that is just about a perfect description, your ears will try to avoid the sounds that Numbs create as much as possible. For instance, the first joint starts as follows:

“Are you ready? Yea! you ready! Let’s get it on!
Because I came to overcome before I’m gone
Word is bond! I draw a line in the dirt
What’s the matter? (what’s the matter) You afraid you goin’ to get hurt?
Back in the swing of things
Feelin’ like the 12th round in this fight game
Still holdin’ the title like some Cobra Kai mic kings
Who thinkin’ that we might change? It never happens…”

The uninspired track keeps petting each member’s ego with various metaphors about how they are so awesome in relation to fighting. Cobra Kai references are always welcome, but to put them into context like, “Still holdin’ the title like some Cobra Kai mic kings” is just unimpressive. Ralph Macchio whooped their ass with the crane kick, so how did they “hold the title”. It seems irrelevant, but if you decide to rap someday and are not even going to use references properly, what is the point? Anybody can rhyme one word with another, but it is the structuring and complexity of those rhymes that is so important. Each member of Numbs lack strong structure or complexity, despite their most obvious influence seeming to be the Beastie Boys who often get very creative on wax.

The most hilariously poor attempt at a track is “Spit on the 3rd Rail”, which is pretty much the same as the rest of the songs that rely heavily on tired phrases like, “Every action has a reaction, a positive, negative, reaction”. But, this one takes the cake when the chorus bridges into a soprano barbershop quartet ditty. Numbs create a constant abrasive feeling by being extremely repetitive when creating their hooks, so when they are bad like this it just draws more attention to them.

When these guys are onto something, like on “Train Music”, that sports a nice soulful vocal sample they seem to execute it poorly. The levels just aren’t right and it sounds like they are trying to sing over the background music. And member DJ Shanty uses cuts regularly, something that underground heads will appreciate, but they are almost always either sloppily done or not timed correctly on the tracks.

If you want to get a taste of Numbs music you can find it on several video game, movie and TV show soundtracks. Somehow they were worked into all 4 seasons of “America’s Next Top Model”.

One could go on and on about the sheer wackness of Numbs, but it is kind of pointless, like beating a dead horse. Most of the album sounds like some nerdy old school Hip-Hop, but less organic, which does not have a place in today’s market. It is hard to differentiate one member from another, which is surprising given that most of their subject matter is about how sweet they think they are, one would think that they would name drop themselves more often. There are two bonus cuts, but who asked for them? There is really nothing nice to say.

“Nfinity” is not the ‘classic’ that the group claims it to be as you can probably determine by this review. In fact, usually on albums that are not particularly likable there are one or two standout tracks that are recommendable, or at least has a glimmer of hope if the artists put their minds to it. However, the sad truth of “Nfinity” by Numbs is that there is not a single track worth mentioning in a positive light.