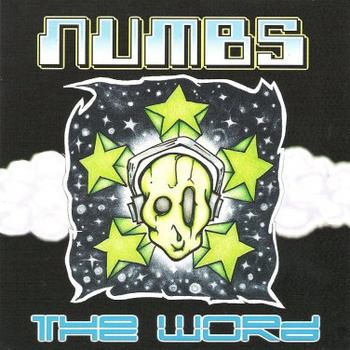 Ok, I ain’t gonna lie — I don’t know JACK SHIT about the Hip Hop scene in Utah. I could pretend like I do and go on and on about how Numbs are holding it down for Provo, Utah and their mid-western steez is further evidence that Hip Hop has permeated every city, town, hood, and nook and cranny of the country and the world, but we already know that. I also know that if there are more groups like Numbs in Utah, I’m gonna actually stop when one of them suited up, penguin-lookin’ cats on the bicycle asks me if I know anything about the Church of Jesus Christ of Latter Day Saints, and ask him to tell me about Hip Hop in Utah instead.

“The Word” is one of those albums you just can’t help but feel. Why? Because it is dripping with Hip Hop. Beats and lyrics? Very important, I agree, but that’s not what I mean. “The Word” has the very ESSENCE of Hip Hop throughout. First, they score bonus points for being on some Cold Crush Brothers/Get Fresh Crew/Jurassic 5 shit and having 2 deejays, Shanty and Rick-One, not to mention 3 emcees Gunnar, Rooster, and Mark Dago, (3 is the magic number, according to De La), the way a 5 man group should be! The hook from the bangin’ “No Mas” seems to sum up Numbs viewpoint quite nicely:

“I can take it back to a time
When it was all about rhymes
The main agenda was develop the mind
But now it’s different
Everybody standing in line
To see if they can get a slice of the pie
I don’t see that
I can take it back to a day when it was all about skills
You didn’t make it if you didn’t appeal
But now it’s different
Everybody’s keepin’ it real
But sellin’ out to a green dollar bill
I don’t see that
NO MAS!!”

Mark Dago, Rooster, and Gunnar each come off like a side to a triangle, collectively completing the whole picture. All are complimentary to each other, but maintain their identity, neither sounding similar to another. Numbs keep their flows far from monotonous. You like Kiss’ monotone flow? Or how Beans has that tendency to end every damn line with the same sound? Look elsewhere. Shit, they even fuck with that triple-cadence shit on “All of Nothing” with the nice Mannie Fresh-like hi-hats bangin’ rapidly. Of course it’s always nice when the beats bang, and Rick-One, who produced most of “The Word” does not disappoint.

Thankfully, none of the tracks sound repetitive, a pitfall that many debut “indie” artists who rely on one producer fail to avoid. The wailing sirens of “On the Run”, funky ass guitar licks on “What it’s about”, violins on “Road Rage” and Spanish guitar on “All or Nothing” keep shit seriously diverse. Hard hitting basslines, nice samples, and the turntablism of Shanty and Rick-One on straight BANGERS like “Numbs House” keep necks snappin’, as beatwise, there aren’t any below-average cuts. Rick-One’s tracks range from being solid to bringing the heat. That’s all we ask for.

“The Word” seems to be 16 tracks of Numbs just being themselves, Hip Hop. No silly gimmicks or anything like that, just a lot of shit that will make any Hip Hop fan smile appreciatively and feel as if they are in on the joke. How could you be mad at lines like “In high school again / This time I’m full grown / Room teacher’s not a chick / It’s KRS-One / He got no face, I know it sounds a little freaky / But he said to me in 4 seconds a teacher will speak to me / In slow motion he said, ‘Let us begin'”… The Numbs just do themselves period, and probably think that those who don’t are just wick-wick-WACK.