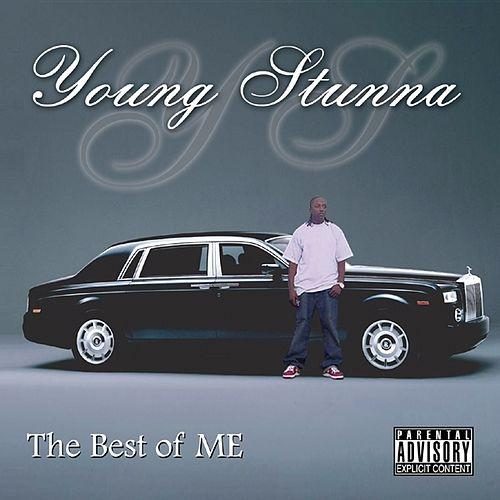 Young Stunna :: The Best of ME

Age ain’t nothing but a number is a saying that gets thrown around constantly but couldn’t be further from the truth. While I could spiral into a million R. Kelly jokes, the truth is that age has a lot to do with rap and rap talent. We all love raw and grimy Jigga from the “Reasonable Doubt” days, but Jay’s flow wasn’t tight as it could be until he had a few albums under his belt. The fact that age leads to experience is the reason I’m always confused when people advertise the youth of a rapper or producer. Sure, if a 17 year old rapper or producer could bring it like the vets it’d be crazy, but the reality is that most 17 year olds don’t have the experience or maturity to be truly great. Young Stunna is one such rapper who possesses talent on the mic, but doesn’t have the intangibles that you only gain with years in the game.

The album starts off with a forgettable “Intro” where Young Stunna runs through a few rap clichÃ©s. Though he sounds like he has talent and decent flow, the kid shows nothing fresh. Especially irritating is the repeating of the same rhyme twice, but used in a different sense:

Except that in Young Stunna’s case “right next to me” has no different meaning so in the words of La Peace this makes the rhyme “super wack.” Next we’re treated with “I’m Back” where Young Stunna talks about his Rolls Royce Phantom. Of course we all know Stunna is just playing into the bullshit brags that have taken over the game as there’s no chance in hell he has a Phantom. But therein lies the problem with this whole album, Young Stunna is just mimicking what he hears on the radio which makes for a bad result. He also drops this gem:

Is this kid serious? Sadly the answer is yes as the drama continues. “Hey Skoolboy” is an anthem to grab your nine or your “big mac” or whatever other corny name you can come up for a gun. “Petty Hoe” is a gripe against a hoe that was petty and played Young Stunna “like a BET video.” This hoe was so petty that she brought other dudes to Young Stunna’s home and caused him to have to change the locks to keep said hoe and other dudes out of his house. Apparently on top of the Rolls, Young Stunna also has a home, and enough money to buy vacations which were the motivation for said hoe to be petty.

I couldn’t make up this mess if I tried myself. I really didn’t want to come down on this youngun’ too hard but it was too much. I mean we all know most rappers don’t live what they talk about, but for a 17 year old to come out talking like this just takes this to a whole new level. Young Stunna has an on point flow, his brother, who produces, has much potential though his instrumentation lacks some depth. So the foundation is there for good music to be made, but these kids fall into the trap of imitating what’s hot instead of being themselves or bringing something original.

Out of all the disappointment caused by Young Stunna’s ignorant imitation of all that’s wrong with the rap game, the most disappointing thing is the fact that his label is run by his own father. If Young Stunna really lives the life he talks about then his parents have failed him miserable. If Young Stunna is simply glorifying ignorance then his parents are exploiting him to get a buck and in the process doing a disservice to the rest of America’s youth. I’m not blaming Young Stunna or his dad for what’s wrong with the rap game or poor America at that, but it is a shame to see Young Stunna’s talent wasted on this effort. With some more experience and a more mature mindset, Young Stunna could use his talent to produce something worth hearing. As it stands, you’ve heard everything contained on this CD before and you’ve heard it presented much better.

Young Stunna :: The Best of ME
4Disappointing
Music4
Lyrics4