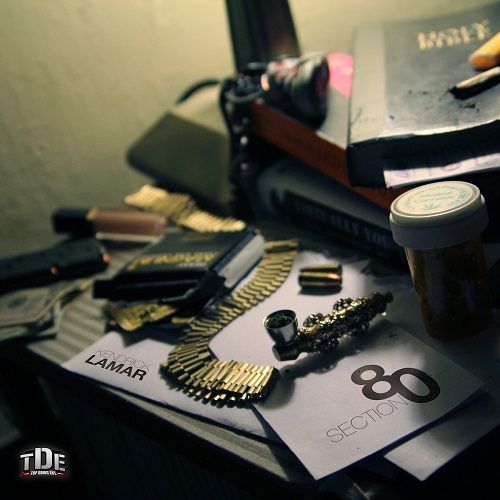 I pride myself on generally being up to date with the latest hip-hop news and album releases, both mainstream and underground, but I’ll admit I had never heard of Kendrick Lamar until I stumbled across “Section.80” while browsing iTunes last week. At first I was slightly embarrassed, given that Lamar is quickly becoming a hot name in hip-hop and was named to XXL’s 2011 Freshman Class, but my embarrassment quickly turned to excitement as I scrolled through the user reviews of the album. Lamar was being touted by many as the next big emcee, someone who understands and embodies the idea of real hip-hop. Like many, I find myself disgusted with the current state of hip-hop, and I was anxious to give “Section.80” a listen and see what the 24-year-old lyricist had in store.

Right off the bat, it’s apparent that Kendrick Lamar is wise beyond his years, and his lyrics have the maturity and depth of those of a veteran emcee. Growing up on the dangerous Compton streets allowed Lamar to witness and experience it all, and he isn’t afraid to hold anything back on the mic, often delving deep into his inner thoughts. On “No Make-Up (Her Vice),” over heavy drums and a somber grand piano, Lamar spins a story of a girl using cosmetics to cover up not only her physical “imperfections,” but also her bruises from a domestic violence incident. “Keisha’s Song (Her Pain),” has a similar feel , as he details the life of a young girl who is forced to sell her body to make a living, ending the song with the chilling final lines: “Nothing really matters, so she hit the back seat/ And caught a knife inside the bladder, left her dead, raped in the street.” On the other hand, Lamar takes an existential look at the world on “Kush and Corinthians,” over sparse drums and an ominous blend of pianos and synths, as he raps “To the meaning of life, what’s my purpose?/ Maybe this Earth is ain’t a good place to be/ How far is heaven? Let’s see.”

Perhaps his best lyrical performance, though, comes on “Poe Man’s Dreams (His Vice),” which features a mellow jazz piano that glides across the track and a simple but effective drum loop. Dealing with everything from his upbringing in Compton to his growth as an emcee, Lamar spits an unforgettable first verse, beginning with:

“I used to want to see the penitentiary
Way after elementary
Thought it was cool to look the judge
In the face when he sentenced me
Since my uncles was institutionalized
My intuition has said I was suited for family ties
My mama is stressing, my daddy tired
I need me a weapon, these niggas ride
Every minute, hour and second, ministers tried
To save me, how I’m gonna listen
When I don’t even hear God?”

What really allows the lyrics to shine through, though, is the unique production style of “Section.80,” which complements Lamar’s laid-back delivery and well-articulated rhymes. While there are a few exceptions, most of the songs aren’t your typical hip-hop cuts. The percussion generally takes a backseat to the electronic synths, spacy piano chords, crooning trumpets, and variety of other sounds that lace the tracks; the drums don’t even drop until almost a minute into “A.D.H.D.,” as Lamar spit’s the first part of the opening verse over a set of shimmering synths. Other highlights include “Hol’ Up,” one of the smoothest tracks on the CD, with its jazzy trumpet sample that blends seamlessly with the background vocals on the chorus, and the J. Cole-produced “HiiPower,” the album’s lead single. Simply put, Kendrick Lamar recognizes his niche and doesn’t stray too far from the recipe that works best for him.

At this point, it seems like the album has it all — meaningful lyrics, quality beats, and one of the sharpest up-and-coming emcees in the game today. And for many listeners, “Section.80” will probably be one of the top albums of 2011. That being said, though, “Section.80” is not for everybody, and despite my appreciation for Kendrick Lamar’s gifted lyricism, there were times when I felt the album was too dark and too somber to be fully enjoyable. There were even a few instances where I was almost depressed after hearing one of Lamar’s tales of woe, and this is simply not the vibe I aim for when listening to hip-hop. If you are someone who likes contemplative and introspective lyrics, then “Section.80” is right up your alley. Listeners who don’t have the patience to play the tracks over and over, though, listening intently to every line to absorb the full message Lamar is trying to convey, will most likely be slightly off-put. The album is still a must-have any true hip-hop head, and it is certainly a promising release from the young emcee, but just don’t go in expecting an easy, feel-good listen.