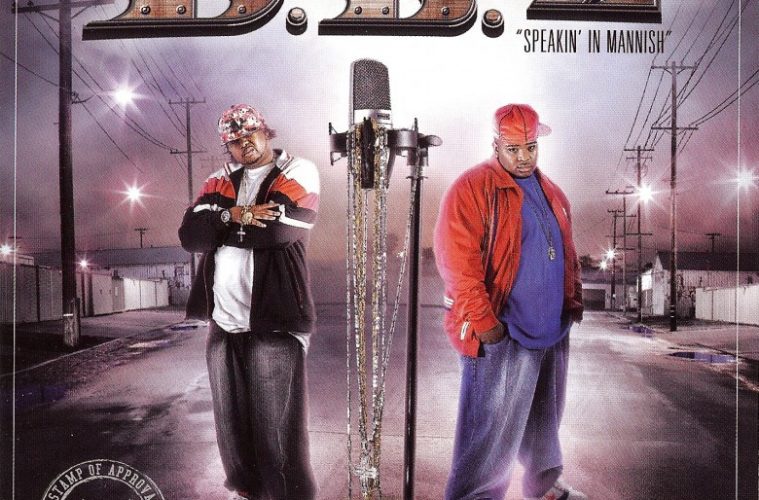 Comprised of Young Hot (a.k.a. Da Stunna) and Work Dirty (a.k.a. Bobby Bouche), the D.B.’z are as yet a relatively unknown quantity nationally but have already achieved the first threshhold they need to break through – national distribution. Since linking up with E-40’s imprint Sick Wid’ It Records you can find their release “Speakin’ in Mannish” at all major retail outlets. Working against them is a complete and utter lack of mainstream radio play and music video exposure. Perhaps the people in the media pipeline fail to realize how much the Bay Area and the hyphy movement got over last year, or they think that “Speakin’ in Mannish” implies the slang and accents will be even thicker than Keak Da Sneak. Surprisingly nothing could be further from the truth, as tracks like Droop-E produced “Go Hard” featuring Turf Talk prove:

“Listen up, the boy is focused
Put the cannon to your head and part your wig like Moses
I’m from Vallel’, the game’s spit heartland
Savage I was raised by gorillas like Tarzan
I’m on the low when the cops is loose
38 packin like ‘Pac in +Juice+
And watch your mouth nigga when you come to the hood
Cause we’ll kick your windows out man and dance on yo’ hood”

“Old folks can’t stand my pants
Boy causin somethin, can’t see his hands
Never sucka though, potnah I’m sorry
I was raised by the old school, call me Atari
Don’t get mad at your boy cause he come through shinin
He ain’t gotta work no mo’ cause he good with the rhymin”

“As a young gun niggaz said I had bang
Now I’m a full grown cannon killin cowards with the hammer
Brrrrap! That’s not the sound of the thanger
That’s the sound of the startin line, game’s over when I start
What I had to do so many nights I couldn’t sleep
While I was countin money, y’all was countin sheep”

There’s some indication out there in the blogging community that “Stewy” may have been the first song dropped on the public at large. If the first thought you had on hearing the name was an animated sitcom, guest rapper E-40 proves in his verse that it’s not a coincidence:

“Look out peeyimp! Ooooh, I’m hub I’m hub, I’m stewy, I’m high
I get Stewie like that cartoon character Family Guy
I got my motorcycle club on my leather vest
Today I’m on my Harley but I also got a Arlen Ness
I ain’t starvin, ain’t no flies on my rubber bands
I’m havin my goudiyah, gouda means cheese man
Cheese man? That’s another word for money pimpin
Look at my all my young dreadheads, they so dummy
They so dummy – yaper long like Shaq toe
Turn a busy intersection to a sideshow”

If you’re confused by all this you just have to remember E-40 loves to drink, so the meaning of being “Stewy” is pretty clear – you get to’ the fuck up and have yourself a good time. Droop-E is a repeat all-star on the boards here, from the pounding electronic opener “Off Safety” to the smooth yet deadly uptempo melodies of “Bloow.” He’s not the only one making noise here though. Vince V makes a name for himself with the super hard “Yes” and the soulful album closer “Passing By,” while Blunted Jaz Jetson encourages you to “Throw Your Hood Up” (with my personal favorite line “They dumb in this bitch like the Ultimate Warrior”) while making sure you’re “Feeling It” before going straight 1980’s on some bell rocking beats for “Ah Shit.” The music here makes you want to crank the stereo straight past ten, no matter WHAT the dial says about the limit.

Getting you to nod your head is in large part is what the D.B.’z are all about. There’s really nothing socially conscious, lyrically thought-provoking or extra insightful about what Young Hot and Work Dirty have to offer here and that’s JUST FINE. You wouldn’t want to get bogged down in morals and ethics on these tracks, because the D.B.’z are having fun and rocking to some of the crunkest beats around. Perhaps Young Hot puts it best on “Ah Shit”:

“We’ll slide through, just like a Visa
Everybody loaded up just like a pizza
Dancin on the scrapers, yellin at our curb
Neighborhoods and our cities airbrushed on our shirts
Yeah it’s Young Hot, I’m stupid with the rap flow
Doin the hyphy on the flo’, throwin the elbows
Floss gold hang down to my nutsac
And Dirty Game’ll jack you for yo’ choke stack
If you thinkin ’bout beef, lil’ dude back
All you hear is D.B.’z and the click-clack”