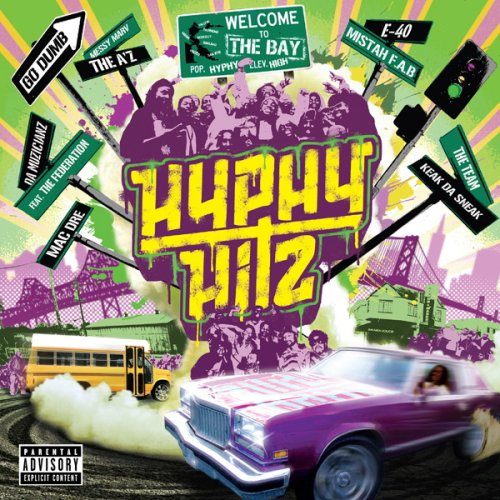 Celebrating 20 years in the business, TVT Records is known for making crunk music more popular than ever before with their Crunk Hits series and signed artists such as Lil Jon and Ying Yang Twins. As a spin off from this, TVT has jumped on the ongoing hyphy craze or “movement,” if you will, a movement that has made many Bay Area artists develop into a household name.

Emerging in early 2000, the hyphy movement was a way for Bay Area rappers to defy the mainstream, radio-played music with its distinct gritty, pounding rhythms and while associated with the crunk music from the South, it still retains its own style and rhythm. It has become a culture, a life, and the Bay Area way of hip hop living.

Touching upon the different representations of the music from back in the day to its current incomparable status, “Hyphy Hitz” is an expansive 20 track collection of famed Bay Area artists including E-40, Mistah F.A.B., The A’Z, Mac Dre, and Keak Da Sneak who coined the infamous term “hyphy.”

Popularizing radio waves across the globe with his distinctive vernacular, E-40 has helped to define the hyphy movement with his signature introductions to “ghost riding the whip” and “going dumb”. Featured in many tracks, E-40 is a highlight to “Hyphy Hitz” and completes the list of Bay artists that have been a part of the movement. So much in fact, he is featured in five different tracks throughout the album with signed Sick Wid It label artists such as Filipino-American artist Nump in “I Got Grapes,” a track dedicated to the “those who got purple” and Furious’ “Take You Down.”

Yet another group from E-40’s Sick Wid It family, the young duo of The D.B.’z (emcees Hot Dirty and Work Dirty) who hail from the heart of Vallejo, get ignorant on the track “Stewy” with the hook dropped from their ten year old cousin Lil Beast and production from E-40’s son, Droop-E. The DB’z breaks it down by explaining that in fact “stewy is right along the lines of hyphy, mainy, ignorant, mannish, ridin yellow buses, retarded.”

E-40 also teams up with Mistah F.A.B.and cousin Turf Talk in “Super Sicc Wit It” which samples Grandmaster Flash’s “White Lines” and adds a hyphy twist to the original classic. Forty Fonzarelli stays solo in “Gouda,” with its reminiscent sounds from the “Psycho” shower scene in its background over a hard bass line as he introduces the latest in food related comparisons to money. Similar to that of “cheddar” or “cheese,” it stands as a more distinctive representation as Gouda cheese is known for its individual aroma.

A personal favorite of mine, the guttural sounds of Keak Da Sneak’s in his hit “Super Hyphy” epitomizes the whole hyphy movement. Although as an underground hip hop fanatic, I couldn’t deny my Bay Area roots when I heard this on the radio with its memorable hard knocking bass beats and head bobbing hook. Yes, I could dance to this one.

Although Mac Dre was killed in 2004, he is considered on of the predecessors of the hyphy music movement. A classic hit from his 2004 album “Ronald Dregan: Dreganomics,” this stellar track still remains in heavy rotation. As a precursor to the hyphy idea, his track “Feeling Myself” had to be included in this anthology and adds to the hard core factor of the album with his unique lyricism and voice.

Switching gears, TVT also decides to include their own out-of-town artists to Hyphy Hitz. Giving a shout out to Oakland, Atlanta’s Da Muzicianz performs on “Go Dumb” collaborating with the Bay’s The Federation and features production from Rick Rock, Droop-E, and Traxamillian. Also, Twisted Black in “I’m a Fool Wit It” with its hard keys and bass line is less impressive, but to remain hopeful, this collaboration of South meets Bay Area makes up for all hostility that many loyal hyphy supporters may feel for the otherwise pseudo-invasion into the Yay’s sacred territory. Although each of these tracks is faintly reminiscent to the obvious ongoing hyphy theme with their more crunk influenced style, the effort from both artists still remains dedicated.

In the end, you can’t miss this bright green, yellow, and purple colored album as it reminds me of what a can of “Hyphy Juice” looks like which is readily stocked in every Bay Area liquor store. So whether you’re wearing your “stunna shades” while “ghost riding the whip” or “getting stupid and dumb” as you “gas, brake, dip” with your “thizz face” enjoy what the Bay Area has to offer in this anthology and culmination of hyphy music. Yadadamean?! Yadadamsayin?!