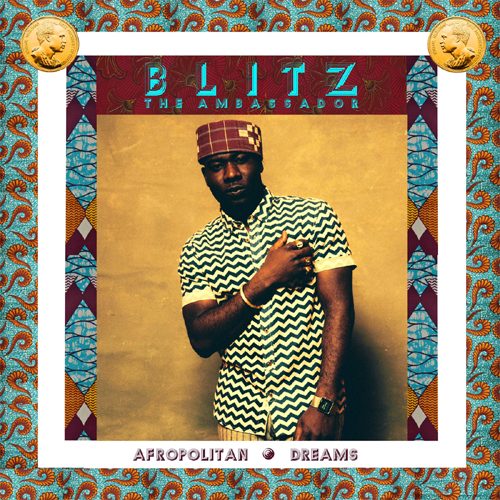 A lot of artists look to address world issues with their music, but Blitz the Ambassador has actually seen most of those world issues firsthand. The 24 year old lyricist may be living stateside now, but he spent his youth in Ghana and by using his music to relate stories from his homeland Blitz is looking to create parallels between Ghana and his current home, the US. This week RapReviews caught up with Blitz to talk about his work, including how his album is helping a number of charities, some of the big issues going on in Ghana the he’s looking to address with his music, and why he feels balance should be the top priority for Hip-Hop right now.

Adam Bernard: Talk to me about yourself. Tell me a little bit about your history, where you’re from, some of the events that helped shape your life and how you became an MC.
Blitz the Ambassador: I’m originally from Ghana, born in Acra. I moved to the states roughly eight or nine years ago. Growing up I was always attracted to music with a message, from the Bob Marley’s to the Fela Kuti to Miriam Makeba, it wasn’t really Hip-Hop for me when I started. I think that’s played a significant role in the choices that I make now as I am part of Hip-Hop and as I put out records. Fast-forward, in comes KRS-One, Rakim and for me personally it was music I could relate to more than the music that was coming from back home, it just seemed like that was my parents music. I went to Kent State University, that really was a solid layer of my life because I had an opportunity to not only get that street knowledge that I was getting in Brooklyn at the time but also become an academic and that also, of course, is a huge part of Hip-Hop culture that nobody talks about, doing the knowledge. I think that’s helped me be able to insert certain messages, whether overt or covert, that the average rapper who is just hip to the street can’t. I have two albums out, “”Soul Rebel”” and “Double Consciousness”. I think “Soul Rebel” for me was more trying to bring together all these experiences and it’s like an amalgamation coming form Ghana, experiencing Brooklyn and being in the country somewhere in Ohio, that was all these three worlds colliding. That was the opening for me, having an opportunity to tour successfully in Europe and come back and play a bunch of spot dates with The Roots, Talib Kewli and Mos Def. I’m sorta lumped in that box, but I think one thing that separates me from the “conscious” rapper is the so-called third world experience that I had that helps me shape a totally different angle when I speak on the same realities as other “conscious” rappers do.

AB: So it was a nice little culture shock coming here?
Blitz: Absolutely, but nothing shocked me more than the similarities. Living in Ghana, of course you’re exposed to New York and Manhattan, but you never really see the bum in the street, the dude who sleeps in the subway, so for me it was like whoa, you got homeless people here, too? That I’ll say was the most shocking, the similarities that we have, every country, every city has it’s poor, it’s disinherited. That was the shock that I had.

AB: Talk to me about the subject matter in your music. What were some of the topics you wanted to get across and why are they important to you?
Blitz: On “Soul Rebel” I was really trying to introduce a whole new concept, Hip-Hop from a third world perspective. My album cover speaks a lot to that, it was a kid holding an AK-47, couldn’t be more than ten years old. I kind of juxtaposed him right in front of the Manhattan skyline. I actually bought that photo from Amnesty International. They were selling those photos to build refugee camps. That was my opportunity to visually put out something that wasn’t everyday. And as far as the music and the message it was just really trying to tell what is going on in these places from a firsthand perspective. A lot of times when we get stories about Africa it’s usually from a Hollywood angle, you never really get the people speaking for themselves, it’s always a backdrop, so I felt like I had an opportunity to bring forth that message. A lot of the records I made were kind of talking about, not just necessarily the pain and the strife, but about life in general. The record “Self Portrait,” which is more of a semi-biography, is more or less trying to paint a picture of places a lot of people haven’t gone, especially in Hip-Hop, and more importantly paint the similarities that we face or that we live through on the continent.

AB: So what are some of the bigger issues in Ghana right now?
Blitz: One of the biggest ones is the debt that we’ve accumulated thanks to bad governments and thanks to the IMF and World Bank. I touch on that in my records. The world owes Africa for the plundering that has gone on for God knows how long. It’s just been absurd to me to see how much emphasis is put on debt relief when a lot of business that’s done is in bad faith to begin with. You give millions or billions of dollars to dictators of course they’re going to blow it on jets, of course it’s not going to trickle down to the people. And I point no fingers, my job as an artist is to document so I try as much as possible to bring these straight issues to light. Another big issue is the HIV virus, of course. Another huge issue is poverty in general, that a continent so rich, that’s sitting on all these resources, accounts for the world’s poorest. The math doesn’t work out for me and those are the issues that I try to put out there and I hope people will discuss them and see the absurdity in those equations. And the key here is not to drum it in your heads. That’s another thing about the kind category that I fit in. You hear these things, it’s on the radio and on the TV. When the newscaster’s talking about Africa’s debt you don’t think that he’s preaching to you, so for me, from an artist’s perspective, it’s my job to put it out there to where it’s as objective as possible so the audience doesn’t go “oh there were go again, another conscious rapper telling us what’s going on in the continent.” I lived it, I’m coming from that perspective so I can speak on it in really reasonable terms. Any reasonable person, and I do believe most Hip-Hop consumers are reasonable, can understand and absorb and at least create some dialogue on what’s going on on the continent.

AB: Talk to me about some of the charities listed in the liner notes for “Double Consciousness.”
Blitz: I felt that if I was going to be selling a couple copies of this album I better try to put out some information for people who care about these issues. I’m linked to all these charities in some way. I play a bunch of benefit concerts because I feel that is definitely where Hip-Hop has dropped the ball. Not being in the community has been Hip-Hop’s greatest death, the fact that we’re so removed from these things that are going on. There are countless charities that if every artist just put two charities in their insert and sold a million copies, that’s a million people who know about Amnesty International, and so on and so forth, so for me it was just like I have an opportunity, I can use my CD as an advertising campaign for these charities that I believe in. And I’ll be honest, I got it from Coldplay’s first CD and that was an inspiration for me. They had listed a couple charities, that’s actually how I got hip to Fair Trade. I’d never thought that I could just slap stuff in there and put it out there. I really feel that it’s contagious, when you stumble on something where you’re like why am I not doing this? I should be doing this, too. That’s the hope, that it will get other people, not necessarily musicians, we all have our fan base on some level and if we could all chip in a little bit, not that it’s on your album cover, nothing extravagant, but something that’s part and parcel of what you’re pushing and what you stand for.

AB: Finally, how would you like to change Hip-Hop, or change music, or is it even about change?
Blitz: I think that I would like to contribute some balance. The guys who want to rap about champagne and getting shot and all of that, keep doing you, but I want to see the opposite side, the guy who has some knowledge of self, some information just kind of balance that out. We talk about the so-called golden era and we had all sorts of styles, not every style I agree with but we had enough of a balance for you to say well you can get with this or you can get with that. I feel that it’s quite unfair to force-feed these kids the same detrimental message on a consistent basis as Hip-Hop has done. The assault on women has been on a crazy consistent basis and you’re not getting the Mos and Talib’s point of view, you’re not getting anything that’s celebrating women in any positive light. So the key here is not necessarily putting an end to everything that’s going on, it’s just making it possible so there’s a decent balance, there’s that other side where if I’m not in the club I shouldn’t be listening to club records, I should be listening to some records that will inspire me to move forward and do things. I feel as humans we are naturally at polarized ends, sometimes we’re this and sometimes we’re that, we’re inconsistent, so having music that takes us through each angle of you, I think it’s necessary and I think it’s what the kids aren’t getting right now, they’re not getting that opportunity to hear a Blitz the Ambassador where they can be like oh word, oh wow, I can actually go to college and get a degree and it’s all good, and I can still be considered urban? There isn’t that role model, or at least there aren’t enough of them, where you can like that’s an alternative for me right there. Having a good balance is key to having Hip-Hop live on and on and having the kids come up with new ideas, new concepts and not be afraid to step out of the stereotypical box that they find themselves in on a consistent basis.