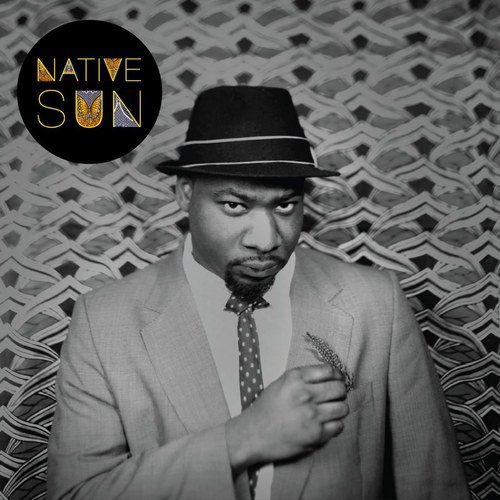 Blitz the Ambassador may hold the distinction of being the most familiar artist to RR readers to NOT have already an album reviewed. That may seem contradictory until one considers that Adam B interviewed him back in 2007 and that thanks to an active publicist he winds up on our newsfeed regularly. Even I your humble writer was a bit stunned when I looked through the RR archive and discovered that he had NO albums reviewed before now. I had seen the name Blitz the Ambassador so many times it seemed to me we had covered “Native Sun” before now, and I was actually checking to make sure I wasn’t writing an unnecessary duplicate. As it turns out it’s quite the opposite – it’s a necessary and wholly unique inclusion.

By way of background for those who don’t know the Blitz name already, this international hip-hop artist was born in Ghana and hails from the capital city of Accra, a growing urban center of 4 million plus which has blossomed in vitality and importance ever since the country first shed its Gold Coast colonial roots. It’s an international city at the heart of a cultural and economic boom, which is also reflected in a demographic which as of this writing pegs almost 60% of the population as being under the age of 24. Where some cultures in African cities might be more staid in their ways, Accra clearly embraces the modern life for both better and worse, something that can just as clearly be heard in the raps Blitz delivers. His accent is barely noticeable at all to Western ears, and when it is heard it’s pleasantly reminiscent of Wyclef Jean. In fact with no slight at all intended to ‘Clef his flow is in some ways more natural and fluid. While Wyclef often seems to pause in consideration of a word to choose, Blitz keeps spitting his “Accra City Blues”:

“It’s funny how things changes
Used to be familiar now it all feels strange
Screamin at each other all crazy and deranged
Love shot me in the heart, point blank close range
And as I lay here gaspin for air
I’m reminiscin listenin to songs we used to share
Sade’s +Lovers Deluxe+ got me lost in despair
My thoughts are unclear all because you ain’t here
But yeah – all she left was a Polaroid picture
The memories of all the things you gotta take wit’cha
On stage gettin live with the Embassy crew
My heart’s trapped from both sides like parenthesis do
But at the end of the day, pride won’t allow pity
You never felt the blues quite like Accra city”

The sharp jazz musician suit on the cover and sharp lyrical diction on the album might suggest that Blitz is a fully converted and naturalized American rapper, but that would be a falsehood. The unique and enjoyable feel of “Native Sun” comes largely from it’s live instrumentation, something his label calls a mixture of “Afrobeat and Ethopian funk jazz.” It’s evident in the percussive sounds of songs like “Free Your Mind,” with instruments that have never come out of any drum machine I ever heard programmed. Over time one finds their memory drifting pleasantly to the tracks of Wyclef Jean, who has always used his unique Haitian perspective to combine the African diaspora of music with the uniquely North American hip-hop attitude and cultural arts. On Blitz’ album this results in songs like “Dear Africa” featuring the soulful crooning of Les Nubians with provocative lyrics like “So while I write you this letter, I need some clarity/People think that Africa’s synonymous with charity.” The trumpet playing of Jonathan Powell and turntablist scratching of DJ G.I. Joe on “Victory” are just as important to the song as Blitz’s rap, but as with most of his songs his brash delivery shines:

“Cause where I’m from a defeat is hard to imagine
The spit spitter that spits sicker than half your squadron
So have ’em call the ambulances, the Ambassador massacre
every rapper screamin (fuck) the masses
And they wonder how the aftermath would have to last
without the rappers, revolutionary broadcasters
I’m Steve Biko for the people, fight to be equal
The African rapper survive, the lyrics are lethal
[…]
And this is for my people in Accra city
Cramped in an internet cafe, watchin Blitz get the crowd busy
I’m Sugar Ray Leonard, independent, you should be offended
Intended to send that pretender you done defended
But I’m international, puttin Ghana on the map
From Accra city, top of the world is where I’m at”

“Native Sun” feels more like a band than just one man, which is definitely as Blitz intended whether or not that’s how the album is being marketed. I’d be fine with calling it “Blitz and the African Soul Band” and suspect from the all too short 45 minutes of this CD that he would be too. It may be cliche to say that “Native Sun” has a world beat feel, but that’s not a bad thing given how few albums in contemporary hip-hop do. Blitz delivers his rhymes proudly and bilingually, but when speaking in English he’s the best parts of Black Thought and Wyclef Jean combined. This album too is the best parts of two things combined – Ghanian pride and American hip-hop swagger. It’s hard to go wrong with Blitz the Ambassador.