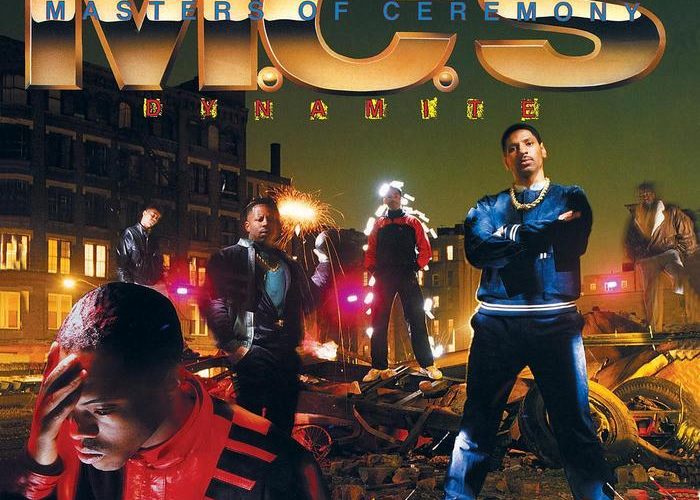 North of the Bronx, just beyond the New York City limits, lay three Westchester County areas that each have contributed to the history of New York hip-hop. Yonkers was the stomping ground of DMX and The LOX. Mount Vernon brought forth Heavy D & The Boyz and Pete Rock & CL Smooth. New Rochelle (separated from NYC by the barely mile-wide strip of Pelham Manor) gave us Brand Nubian and the Masters of Ceremony, the latter being Grand Puba’s crew before the former were conceived. The Masters of Ceremony debuted in 1985 with the single “Crime,” which was co-produced by a yet unknown Teddy Riley and followed up by the two ’86 singles “Sexy” and “Cracked Out.”

The group’s line-up featured Grand Puba Maxwell and his cousin Dr. Who (AKA TLD), both MC’s, and DJ Shabazz, as well as several dancers, all in all amounting to six people populating the futuristic album cover of their 1988 debut “Dynamite” (think six b-boys just beamed down from another planet). The cover looks a lot fancier than that of “Critical Beatdown,” and yet in terms of outer-space hip-hop funk the baby steps of the Masters of Ceremony don’t hold a candle to the visionary beats and rhymes of the Ultramagnetic MC’s.

“Dynamite” is a local release in the most unspectacular sense of the word. It is written and recorded with local stages, local party-goers, local clubs, local competition in mind. It prepares for or reminisces on those nights when Masters of Ceremony are rocking the hometown crowd. It doesn’t leave New Rochelle behind the way Rakim, EPMD, or Public Enemy left Long Island behind, the way Naughty By Nature, the Lords of the Underground, or the Fugees would leave New Jersey behind to become hip-hop icons. The Masters of Ceremony are simply another local crew that happened to release an album when it was relatively rare for rap crews outside of the five boroughs to release albums. But just because a record isn’t that mind-blowing twenty years later, doesn’t mean it can’t hold a special place in history or in people’s hearts.

The Masters of Ceremony played a pivotal role in the establishment of Strong City, the label of hip-hop pioneer Jazzy Jay and Rocky Bucano. Bucano was looking for a recording facility for the group, which he found in Jazzy Jay Recording in the Bronx. He pitched the idea to start a record label to the owner, who, remembering a discouraging experience with Rick Rubin and Def Jam, hesitated to agree. But in 1986 Strong City Records was up and running, its very first release being the aforementioned “Sexy.”

In an era where rap albums were rare and singles were the norm, “Sexy” and “Cracked Out” arguably left a stronger impression than the album that followed two years later. In the ’90s both songs appeared on bootleg vinyl along with other ’80s treasures. “Cracked Out” was remembered by MC Serch on 3rd Bass’ “Portrait of the Artist as a Hood” and later made Ego Trip’s Book of Rap Lists. The majority of the album material didn’t catch on, despite six of the remaining eight songs appearing on several singles once 4th & B’way got involved. That didn’t prevent DJ Shadow from thinking that the title track’s “Just your favorite DJ savior” was just the line to introduce “Endtroducing…”

“Sexy” is a dancehall-ready tune assisted by Don Baron and reminiscent of later Heavy D & The Boyz songs with a reggae slant. It also samples the Isley Brothers who are driven crazy by some sexy lady, and while it primarily courts “the Egyptian queen that’s seen on the Nile / with the brown complexion and a magical smile” (to put it in Dr. Who’s refined manner), Puba can’t help getting into an argument with the girl’s friend and ending up dissing her as well.

“Cracked Out” dumps a trailerload of sarcasm on dopefiends. The Masters of Ceremony use wordplay to describe the insanity of drug addiction, from the opening “Atomic Dog” interpolation “Why must I feel like that, why must I chase the crack? / It’s nothing but the fog in me,” to the popular Star Trek pun “Beam me up, Scotty,” to “Polly wants no cracker, she says she wants some crack.” Set to a somber electro groove and cuts, it is both public service announcement and grapevine gossip about the latest neighborhood victims of crack. The two MC’s discuss the dangers of the drug, and by verse three even engange in some role playing to get their point across:

“Hey yo T (Yeah B?) Explain to me
what in the world is crack? (Crack? Let me see:
It’s somethin’ that keeps your heart pumpin’
taken from blow and then turned into somethin’
It’s the type of drug that’ll have ya hooked
and the side effects of crack are always overlooked)
I wanna try it though, ock! (Come on negro, stop)
Cause you can buy it (Where at?) Right around our block!
But that’s okay (Yeah, but why did you say?)
Man, I wouldn’t smoke crack jack anyway (Well okay
but let me tell you what happened the other day
Me and my homie were walkin’ down the walk way
saw a real fly cutie, she was countin’ some money
I never seen her before, but I knew somethin’ was funny
So me and my homie, we stopped and started talkin’
It was the same old same old, crackheads out hawkin’
Then I said to my homie, ‘Yo, she could get got’
until I saw her dip up inside the crack spot
Man, I was shocked, my mind had been rocked
All types of crazy zombies were around the block
And with the tick of a tock slick dealers would clock
If you had it every addict would be on your jock)
(Yo, I got the jumbo) Yo, can I get one on credit?
(No shorts, homeboy, you might as well forget it)
But I’m starvin’, G! (Yo, that’s not my problem, B)
Well bust this, upstairs I got a Sony TV
How many cracks can I get? (Yo, I’ll give you four)
For a 19-inch Sony? Man, throw me one more
(Aight, you got it) No joke? (It better not be broke)
Well yo troop, it’s brand new with a funky remote”

“Cracked Out” and “Sexy” are Puba’s strongest moments on “Dynamite.” Elsewhere, he tends to be overshadowed by his partner in rhyme, who’s the more conceptual writer, as illustrated by this excerpt from the title track:

“Whip out your Bic and cause a flame to flick
Now bring the heat to meet and greet the wick
Light it, yeah, now you’re excited
A production sponsored, funded and provided
by the brothers not like the others
With another dope beat that covers and smothers
like a blanket, pump it up, now crank it
Give the power to the people cause I want ’em to rank it
Played on the blocks where you see hardrocks
kickin’ the Nikes, Filas, Adidas and Clarks
D-y-n-a-m to the i-t-e
Unstable but the label’s still TNT
That’s packed to the ceiling with the kick of nitro
Stand back, bro, this one’s about to blow”

More often than not, however, Puba and Who work from a mutual understanding, rhyming back and forth and complimenting each other’s lines, sometimes to the degree of Kid ‘n Play. “Keep on Moving” might be Maxwell’s most aggravated performance ever, but throughout the album there are very few hints at the spiritual and political agenda of Brand Nubian, one being the rhyme “Just swingin’ like Magilla but ah, we ain’t apes / Supreme being is the black man, so bust a grape.” There are traces of Grand Puba’s charismatic (if not comical) potential (the way he blurts out “If you heard that we was wack, that’s TOTALLY science fiction!”), but overall Dr. Who might be the more accomplished rapper, his matter-of-fact vocal tone and imaginative rhetoric setting a good contrast to Puba’s tongue-in-cheek delivery.

Acting as the album’s producer, Maxwell assumes the position of the musical director, referring to the “beats done by Pu” as being “a habit I developed many, many moons ago / bangin’ on table tops in New Ro.” The title track starts the album off on an interesting note with what seems like a combination of machine drums and sampled marching drums. DJ Shabazz mans his position on the decks, his rhythmic cutting adding an edge to tracks like “Dynamite” and “Keep on Moving” (which features the kind of colorful horns that you’ll only find in late ’80s hip-hop). “One to the Knot” is the most plain tapestry imaginable, lit up only by the MC’s harmonizing vocals and the DJ’s cuts. “Rock Steady” borrows from ESG’s “UFO” and other breakbeat staples, while “Master Move” owes its jerky rhythm to Mandrill’s “Fencewalk.” You can easily imagine “the posses bounce around” as these “big drum beats pound,” but from both an 1988 and from a 2007 viewpoint, “Dynamite” lacks refinement in sound and structure. Only those who willingly embrace the obscure, independent aesthetic will not mind the muffled atmosphere of this album.

And yet, even though the MC’s claim that they’re serving “just hip-hop, no pop,” some tracks are as pop as hip-hop could get in ’88. “Redder Posse” is six minutes of sugary keyboard harmonies and sing-song vocals. “Rock With the Master” features extensive around-the-way-girl hooks from back-up singers, along the prerequisite chatting from unofficial member Don Baron (who is on half the tracks). To the MC’s credit, even the most lighthearted keyboard support is boosted by a booming rhythm section, such as on the CD bonus “Hard Core,” whose quirky bass and fat drum kicks inspire Who to brag about their “hard-kickin’ b-boy sound” that mixes “soul, rock ‘n roll with a twist of James Brown,” with the added ingredients of “heavy bass,” “a smash to the crash, a ratatatat to the snare drum,” resulting in a beat that is “harder to find than Assata Shakur.”

Boasting the classic ’80s line-up of two MC’s and one DJ, the Masters of Ceremony made a good case for being “the Masters of Now Rule,” nothing less, nothing more. It’s cool to hear Pu and Who big up their DJ Shabazz, to hear them showcase their mixture of rumbling and tumbling beats and town crier routines at the dawn of one of the most creative eras of hip-hop, but all things considered this is the kind of album that you only look up once you’ve done the recommended listening. Maybe realizing they were past their expiration date, the Masters disbanded in the same year, ultimately making Brand Nubian possible. Grand Puba would preserve his contempt for crackheads and take with him the experience of realizing an album as a producer and as a rapper. For those who know their “One For All,” he also kept the rhyme “Hurting like a blister, confusing like Twister,” but that’s for another review.