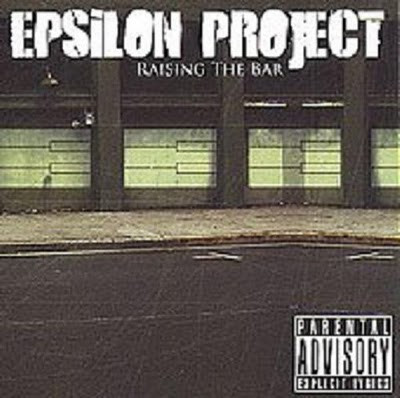 Epsilon Project might not necessarily be raising the bar on “Raising the Bar,” but it was definitely set pretty high. The group would seem to be asking for trouble: at seven members deep, organization is always an issue. With so many roles to keep track of, it’s easy to completely derail, a problem that even the Wu-Tang Clan has been accused of in the past. On “Raising the Bar,” however, this is hardly an issue.

In fact, the album flows extraordinarily well, to the point that seven members would seem almost unnecessary. They specialize in a decidedly ’90’s-sounding Cali vibe, carrying in the same vein of smooth, sample-based artists like the Pharcyde. Like what could be considered Cali tradition, the emcees’ flows have no holes, weaving in-between the breaks like it’s second nature. It’s little wonder they possess such a natural ability to produce dope music; Oxnard natives, they’ve been raised around an outstanding hip hop scene that’s produced the likes of Lootpack, Oh No, and Madlib and his countless side projects.

The production on “Raising the Bar” is dark and dirty; crackling static and old vinyl enveloping the jazz-based beats. Credit is due just as they avoid the whole “bringing it back” routine, because they’re perfectly set up for it. Trendy, sped-up soul music is completely absent, yet they prove they don’t need it to make hard-hitting tracks. They have a cohesive sound, resulting in rugged party music reminiscent of other Cali funk lords Tha Alkaholiks and Dilated Peoples.

Along the way, an impressive lineup of guest stars add an extra dash of dope. Kankick provides a track worth of his heavily slept-on, quirky bump to “We Came For the Title,” while Wildchild brings his veteran ability to “That’s That Crew,” sticking out like a sore thumb with a particularly ill verse. “Cali to DC” might be the climactic peak of the album, the multi-talented Oddisee lending his two cents with a verse while songstress Stacy Epps (of “Madvillainy” fame) handles the hook over a smooth guitar loop. Stones Throw affiliate and lootpack jockey DJ Romes even stops in to cut the fuck out of the intro. It’s not like the guests are even needed; Epsilon more than handle things for themselves; but the number of underrated artists featured is noteworthy, to the point where “Raising the Bar” becomes one big, screaming wake-up call for the heads still sleeping.

Musically, “Sincerely Yours” sounds like polished, early People Under the Stairs. As a tribute to hip hop it’s totally harmless, if not severely played out.”Guerilla Press the Industry” crunches and shakes appropriately, while “Back Stabbers” is a tiresome tirade, tackling the traitor tale in a way that’s been topped before. With these minor setbacks aside, Epsilon Project put on a show with “Raising the Bar.” At a short but effective 40 minutes (and just 10 full length songs), they throw few obstacles in their path en route to one of the finer LP’s for the first half of 2007.