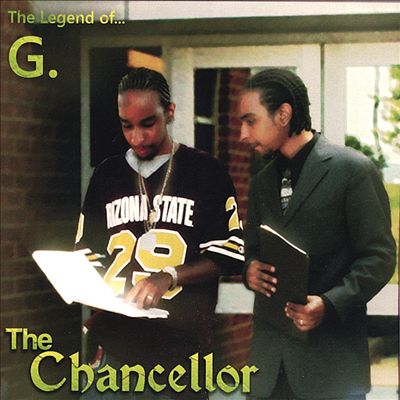 G. :: The Legend of… The Chancellor

Socially conscious rappers are often criticized for being dogmatic, or preachy. While there are certainly a number of great socially conscious rappers, nearly all of them are pegged with that stigma at one point or another in there careers. It seems to come with the territory. Some rappers, however, are so superbly confident that there ideas are the correct ones, that it can lessen the impact of their music. G., unfortunately, is one of those rappers.

The basic concept of “Chancellor” is that its creator is dying, and sleeplessly created one masterpiece which would exist beyond him, and “Chancellor” is that project. While not exactly masterful, G. is certainly a very skilled rapper, dropping complex rhymes and metaphors with ease. He even gets a nice selection of beats, which are nice to listen to without ever stealing the stage from G.’s rhymes. From the moment “The Address” slithers onto your speakers, G. appoints himself as the hip hop Chancellor, coming up with easy metaphors for hip hop and rappers:

“We specialize in poetry, science and math
Some students in the past that graduated shouldn’t have
But I’m a leave it at that; I can’t take diplomas back
But I can set us on the right path, get us right back
Plagiarism lurks where creativity lacks
I’m giving term papers back, asking cats, “Did you write that?”
Cite facts, quote bright cats. Research is so important
I had to recruit the top professors, and pay them what they wanted
My own salary gone, its, sacrificed I’m willing to make
To separate the real from the fake
So what is my fate?
Do you like what I helped to create?
The world remembers that once we were great
And we can be great again, but time is not on our side”

As Phonte of Little Brother once put it, “hot beats, hot rhymes, what more do ya’ll want?” With somebody like G., it’s a lot. Sometimes, it’s really not what you say, but how you say it. G. raps in a voice that sounds like an attempt at being melodic, but comes across as mocking the listener. His inflection sounds like an amateurish attempt at speaking to a child. It absolutely ruins every song on the album, making them boring and downright irritating to listen to.

And that’s a shame, because as a lyricist, G. is very good. He does think a lot of himself, but what rapper doesn’t? And more importantly, he can back it up. He can drop a song like “Double Meaning,” where as the title implies, nearly every line can be taken in two ways. “Pennelope” seems to be about an ex-wife, but is actually an extended metaphor for Penn. State University (although it’s a little too hard to catch that from the song itself). Other songs like “Martyr” and “Reflections of Ramadon” offer astute reflections on the human state of mind.

“The Chancellor” is consistent, unfailingly so. Unfortunately, it’s consistently boring. The production is designed to put the focus squarely on G., who has all the charisma of drying paint. There’s no point in the album where the listener will feel any emotion whatsoever from him. Lyrically, the man is fascinating, and it’s mind-boggling that he could produce an album that could put even the most diehard hip hop fan asleep.

It’s very rare that a good rapper can rap over good beats, with a strong unifying concept, and make a bad album, but G. has managed to do it on “Chancellor.” The album is a better read than it is a listen. Frankly, his delivery is the worst I’ve ever heard on a record. I’m astonished that he actually thinks it’s somehow effective, but it absolutely kills the album musically. If you absolutely love lyrics, then pick “Chancellor” up. But it is otherwise impossible to enjoy.

G. :: The Legend of... The Chancellor
5Overall Score
Music2
Lyrics8