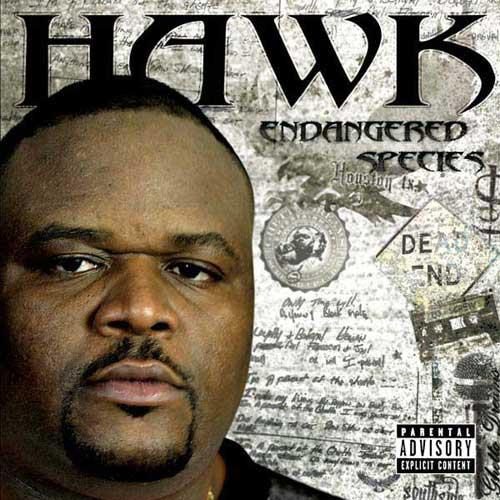 “Endangered Species” was the name of an Ice Cube song which focused on how Black males were an endangered species in the United States given all the problems and adversity they face on a daily basis. While that political statement still holds weight today, the title to H.A.W.K.’s posthumous album has a much more personal meaning behind it. Both John “H.A.W.K.” H.A.W.K.ins and his brother Patrick “Fat Pat” H.A.W.K.ins were successful and highly regarded rappers as members of the Screwed Up Click. Fat Pat was tragically murdered in 1998 on the cusp of what many thought would be a nationwide breakout with his hit single “Tops Drops.” Eight years later, his brother met the same fate in almost the exact same manner after achieving success with his own hit single “You Already” in 2002 and readying a new album for 2006. Making things even sadder is the fact that both H.A.W.K. and Pat were featured on Trae’s recent single “Swang” where H.A.W.K. rapped:

“I’ma swang and I swang, and I swang to the left
Pop my trunk, for Fat Pat’s death
I would give my last breath, if I could bring you back
Bring Screw back, matter fact bring the whole crew back
Only God can do that, so I’ma leave it alone”

The only solace one can take in this whole series of events is that H.A.W.K. is finally reunited with his brother Fat Pat and his mentor DJ Screw. As with most of the rappers who have passed away, H.A.W.K. left us with one last album and “Endangered Species” strengthens both the H.A.W.K.ins family and Screwed Up Click legacy.

The intro to “Endangered Species” features H.A.W.K. talking about his music and comparing this album to his brother’s “Ghetto Dreams” and referring to it as a “ghetto classic.” It adds to the personal feel of the album as the liner art features pictures of H.A.W.K. at his wedding, with his kids, and a notice asking for information on H.A.W.K.’s killer and offering a reward. The first track is a star studded affair as Slim Thug and Paul Wall lend a hand as H.A.W.K. talks shit over a horn laced Derek “Grizz” Edwards beat on “Let’s Get It On.” “I Like That Girl” features Houston veterans Lil’ O and Mike D and is a smooth ladies anthem in the spirit of some of H.A.W.K.’s most popular songs. “Throwed In Da Game” features the legend that is Lil’ Keke (where’s that Swishahouse album?) and samples a classic Fat Pat line for the hook. Big Pokey (of “Sittin’ Sidewayz”) and the Botany Boyz’ C-Note also make appearances to put together a dark, thumping southern anthem. “Ain’t Having That” features H.A.W.K. taking up a fast flow and repping for the Screwed Up Click:

“I ain’t having that and that’s a fact, I put that on Screw and Pat
So y’all cats better back back before I start to react
And attack with a glock or mac, creating holes like a fullback
When I cock and aim and pull that, I bet that you won’t pull back
I’m a cool cat and I keep it real, big dude with six build
That will kill if a nigga feel he wanna test my skills
I’m so real, can’t stand fake, can’t stand those that playa hate
There’s money to make, so why hate? Let’s all make this damn cake
I ain’t having it, cuz I ain’t the one, I’ma show you how to do it son
I rap for fun and make niggas look dumb
How come? I don’t know, I was gifted with the flow
I bust flows with my little bro before I let go
Damn H.A.W.K., you hot like lava, ain’t having it so don’t bother
You take it any further, I will use the problem solver
H-A-Dub-K â€“ Move bitch, get out the way
You heard what the song say, we mean what we say”

H.A.W.K. never had the most complex lyrics, but he had a presence on the mic and a dope flow for a big guy that made up for it. The rest of the album is just as strong with tracks like “Y’all Don’t Know” and “H-Town Stomp” sure to be playing in cars all summer. H.A.W.K. also drops a track for the radio as he teams with Devin, Trae, and Chamillionaire for a smooth rap song on par with Scarface’s “Fuck Faces.”

With the intro, outro, and two poetry interludes, the album itself only adds up to 8 tracks making it painfully obvious that this wasn’t how H.A.W.K. envisioned the final version of “Endangered Species.” Yet even in its limited nature, this album is definitely worthy of your attention. All 8 tracks are solid both lyrically and musically and as good as anything H.A.W.K. ever dropped. For those unfamiliar with H.A.W.K., this album is a good place to start, though 2002’s “H.A.W.K.” is also highly recommended. Long time fans will enjoy “Endangered Species” from start to finish, but like Fat Pat before him, we’ll be left wishing H.A.W.K. was still around and still dropping music.