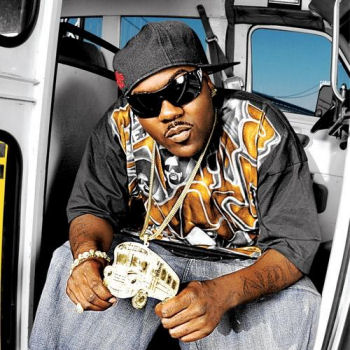 Right now one man has people jumping onto the hoods of their own moving vehicles, ghost rider authority Mistah F.A.B. This week RapReviews sat down with Mistah F.A.B. and found out more about the stunt, his political ties, and how the song “Ghost Ride It” is just one very small aspect of who he really is.

Adam Bernard: “Ghost Ride It” became a huge jump off single for you, but it also created a number of controversies. Talk to me first about what happened with the movie studio.
Mistah F.A.B.: Well you know controversy in any form is great, especially when you’re dealing with marketing an album and selling an album. Columbia Pictures actually owns the trademarks for the Ghostbusters emblem that was used in my video. They told us that they didn’t pass the authorization for us to use it so we had to pull the video from all video outlets and if we didn’t that they would sue us. We felt that the buzz that we had already generated was enough for us to go on with it. We didn’t feel that we wanted to fight it. How can you fight a powerhouse like Columbia Pictures whose money is endless? We just used this and turned the negativity into a positive and continued to capitalize off the buzz.

AB: Do you think it was a little hypocritical of them, a studio that made a comedy movie, to shut down something that was, in effect, satire?
F.A.B.: Not at all, man. If someone owns something they have all rights to do whatever way they feel with it. I can’t be mad at them because that’s theirs. We used it and without their authorization. And that’s how life is, right is right and wrong is wrong, regardless if even the wrong is more right. So I have to agree with them in doing what they do and they only made me bigger by doing it.

“It’s something that we do and it’s natural to us. People who may not be so hands on with it like we do it [..] they hurt themselves.”

AB: There was also the issue with the actual act of ghostriding (jumping on the hood of your own car while it’s still moving), correct?
F.A.B.: Yeah, it’s a dangerous stunt that people do. Some people get hurt, some people have fun doing it, it’s just when you do it you have to be responsible, man, and be held accountable for anything that comes with it. It’s part of the Bay Area culture. It’s something that we do and it’s natural to us. We’re used to it, so a lot of people who may not be so hands on with it like we do it, that are influenced and want to do it, they hurt themselves. Two people have died from ghostriding, that’s a terrible thing, man.

AB: Moving on to you as an artist, I want to know what makes Mistah F.A.B. F.A.B. and if F.A.B. stands for something.
F.A.B.: It’s an acronym for Forever After Bread. And what that is is the hustle for getting money. That’s how it is, getting money, stay hustling, stay doin whatever you’re doin. And when I mean hustling I don’t mean selling drugs, I’m saying whatever you’re doing to stay current and stay relevant in today’s society. Hustle, man. Mistah is also an acronym, Mistah stands for Money Is Something To Always Have so stay Forever After Bread. That’s how you stay current.

AB: What type of impact are you looking to make with your music?
F.A.B.: I just want to be able to change lives. You may not affect everyone in the way that you envisioned but as long as I’m doing music that can sometimes take away from the pain that a person’s dealing with, sometimes embrace the pain that a person is dealing with, help them see a different way, help them see that opportunity is possible, show them that selling drugs and doing negligence is not the only way to make it out of the inner city and out of the ghetto, and as long as I do that, that’s my purpose of music and that’s my influence of inspiration.

AB: Gost Riding is definitely a west coast thing. In what other ways do you feel you represent your community?
F.A.B.: Music is one thing. It’s something that I have a talent to do. As a person and the inspiration that I am when I walk around the city and I show people that success is not that far away, look at me, you can do everything that I’m doing. My community involvement is something I value way more than my musical influence. Changing lives, being hands on with some of the Boys and Girls Clubs, the youth centers, going up to the high schools and the middle schools an talking to these kids, to working with some of my political ties, from working with the newly elected mayor of my city and really being involved with what’s going on in the community rather than just talking about it or rapping about it, really being hands on.

“I’m from Oakland, California [..] this year they’re going to close down six schools, so the education’s down.”

AB: I think that might surprise a lot of people to hear being that right now everyone knows you for going on top of the hood of a car. Talk to me a little more about some of the issues you’re dealing with and that you’d like to see exposed and changed.
F.A.B.: I’m from Oakland, California, and in my city last year they closed down seven schools, this year they’re going to close down six schools, so the education’s down. I want to plant education back into their minds and make it important. No one goes to school anymore. I go into the high schools and I go talk to the kids and they be like don’t nobody be there, it’s crazy. Alameda county has one of the lowest literacy rates in the US. And like I say, music, I’m a marketing genius, man, I know what to do to get people to talk about me. It’s like J.Lo when she wore that dress to the Grammys that year. She knew it was gonna get a whole lot of attention, but she’s a businesswoman, you see how she goes from millionaire to millionaire. She’s a businesswoman and she knows the moves that she has to make to stay current and that’s how I am. If ghost riding is what people want to categorize me as and feel that all I do is ghost ride and all I rap about is this, hey, shoot for it, but at the end of the day I know what I’m doing and I know that on my album I give my heart and I put 100% into everything that I do and my heart is way more than what people think about me, so I really don’t care what people view me as or think of me as as far as from a musical point of view. As long as I’m saving lives and helping people out, that’s all that matters to me.

AB: What does the future hold for Mistah F.A.B.? You clearly are going to have a career in Hip-Hop, but you also seem to be dealing with a lot of real issues, so are you also going to have a career in politics?
F.A.B.: I may be involved in some politics, I’m definitely working my diplomat game right now in just getting involved in the who’s who in my community because today’s District Attorney is tomorrow’s judge and knowing that, being knowledgeable of that, mending relationships and tying in friendships is something that I value heavily because you never know who’s gonna be what and what’s gonna be what. So like I say, this music is just an elevator for me, it’s an escalator, it’s something to get me to a higher level, to that next level. Once I get there, whatever God has in store for me that’s what I’m gonna do. Whatever it is it’s gonna be something that I’m doing from my heart and that I want to be involved in.

“And I’m just grinding, man, and I want to let people out there know anybody with a dream, man, dreams do come true…”

AB: Is there anything else you feel people should know about you?
F.A.B.: I have a radio show and it’s called Yellow Bus Radio and what I do is I give a lot of people opportunities, playing some of the local cats songs, interviewing cats, just being the voice of the community, really helping people out and I really want to let people know that. My album’s in stores now, it’s called Da Baydestrian. It’s my third album. And I’m just grinding, man, and I want to let people out there know anybody with a dream, man, dreams do come true, you just have to keep pushing for them. I say that to everybody and I show them I’m living proof that dreams do come true. I started off with a pen and a pad and now I’m becoming someone who people look up to and want to be like and that’s crazy, man. Dreams do come true, and kids these days have to see success to believe in it, and in the communities and the cities that I live in and that I’ve visited it and that I’ve grown up in you don’t see success much, success is rare and you see success it’s on TV, it’s never in the flesh, so I want to be that walking success to people to let them know you can do this, too. Look at me, I look just like you, I come from where you come from, you can do this to. That’s my main thing, Mister You Can Do This, Too.

AB: Mister You Can Do This, Too. That’s your new nickname.
F.A.B.: That’s my nickname right now, man!

AB: That’s nice to hear, a lot of times I get folks who say things like “my goal is to buy the world!”
F.A.B.: That’s how it is, people aren’t realistic and that’s what I mean. When you look at TV screens you don’t see reality, you see something that’s a fallacy. It’s something that potentially can happen, but when you see a person who’s really gonna tell you I’m broke today, or I don’t feel good today, or I’ll sign this autograph but I’ve really been having a rough day, bear with me, I’m a person, and I think like a person, like an individual. I think realistically because I know that everybody can’t buy a Benz, everybody can’t have a chain, everybody can’t have a big ol house. Be realistic, man, and think about people other than yourself. Humble yourself sometimes to certain people’s situations and circumstances and that will make you appreciate life a whole lot more.