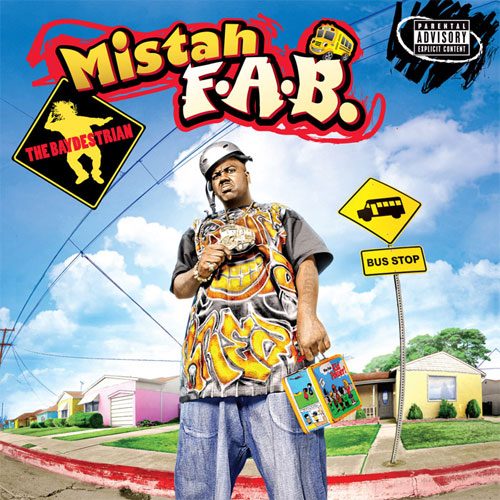 If you go to YouTube and type in “ghost ride” you’re likely to come up with a lot of hilarious clips of idiots who thought it was a good idea to stand on or walk by a moving car with no driver. Such antics are best left to professionals and no one is more pro than Mistah F.A.B. who’s ridden the “ghost ridin'” craze all the way to the bank. Mac Dre’s protÃ©gÃ© has crafted out a movement of his own as his politically incorrect Yellow Bus Riding ways have taken “get stupid” to the extreme. Sadly, all the buzz and momentum he had built up with the single “Ghost Ridin'” got killed instantly when legal action was threatened over the use of a GhostBusters’ look-a-like car in the video. See, F.A.B. got the rights to sample the GhostBusters’ theme song, but didn’t think he needed to do the same thing for his Mac Dre adorned GhostBusters’ car. F.A.B. wasn’t necessarily being irresponsible as usually companies don’t take these things to the extreme, but it seems Columbia wanted to be assholes about the whole matter. To appease fans while all this drama gets settled F.A.B. has released “The Baydestrian” independently, an album which is worthy of nationwide distribution itself.

The album starts out on a high note with “The Baydestrian” where F.A.B. explains that this means that he “rides a whip with no hands” and drops the hilarious line “niggas love me like Ricky loves Lucy.” Much like Mac Dre before him, F.A.B. finds a way to address old topics (in this case ghost ridin’) in entirely new and fresh ways. After that every song is of such high quality it’s impossible to point out highlights. Keak Da Sneak is in top form where he drops dope verses for the super hyphy “Sideshow (Remix)” and “Race For Your Pink Slips.” The beat for “Sideshow (Remix)” is a hyphy version of Cassie’s “Me and You” and injects new life into old music much in the way Keak Da Sneak’s “Town Business” did for “Freek-A-Leek.” “Furley Ghost” is an uplifting dedication to Mac Dre where F.A.B. crafts another dance for the Bay and compares Mac Dre’s ghost to the holy ghost since they both make people dance. The highly underrated Sean T drops a pounding beat for “Crack Baby Anthem” and the equally underrated Messy Marv stops by to give the track instant street cred. F.A.B. infuses the album with a healthy dose of uplifting and social music with tracks like “Shorty Tryin’ 2 Get By,” “Deepest Thoughts,” and “100 Bars.” The “weakest” track on the whole album is actually a pretty dope new school tribute to LL Cool J as “Goin’ Crazy (Big Ol’ Butt)” can’t be ruined even with appearances from half of D4L.

Most artists caught up in industry politics usually release a mixtape or two, but they tend to be low on quality. Mistah F.A.B. holds nothing back and drops a dope album to keep fans happy while he works out the issues. The only minor problem is that fans will be left wondering whether F.A.B. can top such a dope album with his major label debut. Yet, F.A.B. isn’t strictly a quality over quantity guy, as “The Baydestrian” offers much in quantity that hasn’t been discussed yet. On top of the album you also get a second disk which includes the DVD “The Freestyle King” chronicling Mistah F.A.B.’s career. This isn’t some cheap add on with one or two videos that you usually get with CDs, it’s the full release that is sold on it’s own for 20 bucks. If that isn’t enough for you stingy rap fans, Mistah F.A.B. goes even further as once you open up the CD you get a code and website where you can go download Mistah F.A.B.’s first album on Thizz Entertainment, the highly acclaimed “Son of a Pimp.” I don’t usually say this, but this is one of the few releases that would be worth the highly inflated suggested retail price of 16.98 if you can’t find it any cheaper. Matter of fact getting two full albums and a DVD for the price of one album would put Mistah F.A.B. past the 10 point scale if we were allowed to give value vibes.