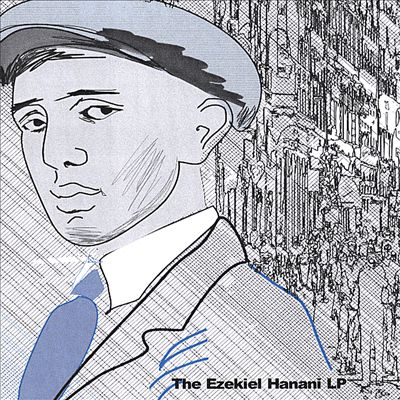 Once again the internet gives us an MC/producer tag-team that despite the distance that separates the duo physically displays a natural chemistry. Soulbrotha, Nigerian native and Houston resident and DJ Roeg du Casq from Birmingham in the United Kingdom met at one of the most reputed message boards, the section at okayplayer.com, and began their transatlantic collaboration in 2005, but postponed the proper release of “The Ezekiel Hanani LP” until 2007. Inspired by the music he heard, Soulbrotha created the character of Ezekiel Hanani, someone sharing his views on the world but more firmly rooted in adult life than its graduating author. On the project’s website, theehlp.com, Soulbrotha goes as far as addressing us as Hanani, who when his 9 to 5 as an engineer allows for it, enrichens his local rap scene with his performances. Consider Zeke, as his fictional fans call him, to be Soulbrotha’s semi-alter ego from the near future. As a personality, Soulbrotha has one quality to make this kind of future happen, and that is his unwavering conviction that he is guided by a higher being. As an artist, he has Roeg du Casq’s solid understanding of soulful music to ensure a sustainable foundation.

As the instrumental “Intro” rises like a tide in soft waves of sound splashing, you’re immediately pulled in and anticipate the next steps. “Zeke’s Speech” welcomes you with warm bass tones and organ-based harmonies from the low and the high end of the sound spectrum that are backed by female hums. “In Numbers” creates a live club atmosphere with an uptemo track and slick keyboard layers drawing euphoric figures into the night sky. “Forum” doesn’t stray from the formula, but thanks to a thick bass and differently arranged melodic layers again a completely different mood is evoked. “Without a Trace” combines thoughtfulness with a comforting groove, the smooth rhythm, vocal harmonizing and the subtly applied percussive elements making you almost forget the “story of sorrow” being told.

“Raptured” is the first song to give a voice to the singing backup which accompanies the jazzy, bubbling backdrop with familiar “Keep rising to the top” encouragment. “Dedication” borrows from “Straighten it Out” not just a C.L. Smooth vocal sample, but also the guitar twang from Ernie Hines’ “Our Generation,” interwoven into Roeg du Casq’s string-supported track. If any beat on “The Ezekiel Hanani LP” is built largely from samples, it’s “City 2 City,” and considering that it blends so well into the rest, the cohesive sound is either due to the limited equipment or it is the intended result of Roeg du Casq’s mixing and mastering. However, the CD’s uniformity is also its ultimate downfall. The moods and tempos change continuously throughout “The Ezekiel Hanani LP,” and yet it remains locked in the same somewhat sterile position. The truly top-notch sound quality that soul-influenced hip-hop deserves is achieved at no point. To make low-fi soul is hard enough, to put it into a modern hip-hop context and have it sound potent is almost impossible. The REALLY smooth shit, the REALLY soulful stuff is best left to the R&B professionals. But that’s admittedly coming from someone who never quite bought into the 9th Wonder hype.

The vocals have a similar problem. Early on, the Zeke character expresses his hope “that you don’t get caught up with flows / but that you can receive from God that which will touch your soul.” The problem is not that the rapper puts content before style, it’s that it is exactly said content which exposes the very lack of a technically advanced flow. The album’s artistic dead-end shows itself nowhere as clearly as when Soulbrotha repeats on the song “Forum,” “I need a forum to speak.” As if he was imagining a forum to share his views and happened to come across rap. Soulbrotha raps in a conversational tone, but one that regularly emphasizes like a concerned teacher would. Like someone who has something important to say, and really believes in it, but ultimately isn’t all that convincing. His vocal tone is somewhat reminiscent of Blackalicious’ Gift of Gab, but that’s where the comparison ends, as Soulbrotha possesses neither the rhythmic sense nor the nimble tongue of Gab.

There are admittedly enough rap acts who, to say it with Lauryn Hill, sell their “soul for some secular muzak that’s wack.” Soulbrotha won’t go that route even if hell freezes over. His half-heartedly applied concept with a fictional protagonist can’t obscure the fact that Soulbrotha wants to talk to you about Christ. “Without a Trace” is what happens when Jack Malone suddenly turns religious (“God will find your baby”). “Raptured” presents the individual as “His work in progress” and marks success “without fulfillin’ God-given destiny” as shallow. “In Numbers” leads you to the dancefloor just to meet Jesus: “Make a date with Him / so He can give you a Change of Heart from the old days of sin.” “Patience” cautions that “to gain life you must be rebirth.” And even the musical journey to Chicago and Nigeria “City 2 City” ends on a spiritual note.

The other day I was invited to the table of a family that I knew to belong to a congregation. Spiritual matters were brought up at no point in the conversation, but I knew that when we would sit down to eat, we’d say grace. I therefore was prepared and joined in the prayer, although this it not something that I do at home. Having reviewed Soulbrotha’s “Music for Agony” mix CD, I knew what to expect when I sat down to listen to “The Ezekiel Hanani LP,” but while the aforementioned grace was followed by talk about work, school, and family matters, Soulbrotha, even though he promises something else, insists on proselytizing. If the evolution of rap (the good, the bad and the ugly, all of it) teaches us anything, it’s that it needs dedication and detail. Soulbrotha is intent on injecting both into his music, but is too single-minded to succeed. Since it is the artist’s wish to not only extend his work with DJ Roeg du Casq, but also to delve deeper into the story of Ezekiel Hanani, it’s certainly not too late to learn from the mistakes and do it better the second time around.