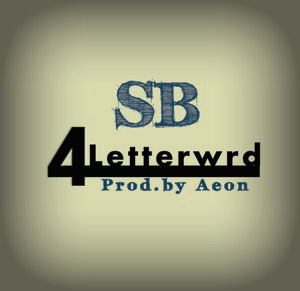 Early on in Soulbrotha’s career fellow writer Matt Jost took a look at his “Ezekiel Hanani LP and found it wanting in some aspects while succeeding in others thanks to production from Roeg du Casq. The Nigerian born rapper has stayed busy since then, linking up with different producers and representatives along the way, until finally landing here and now in 2012 with his new “4letterwrd EP.” Taking a rather personal tack, SB sent out an e-mail to let us know Whitney Houston’s funeral service affected him deeply, reminding him that life and time are both precious and not to waste either. He feels that his music is a gift to share with the world, and as such “4letterwrd” is being offered to the masses as a free download.

Soulbrotha’s producer of choice on this seven track EP (five songs plus an intro & interlude) is Aeon, who lists Tanya Morgan as among the artists produced for to this point. The website I was linked to for Aeon was all about photography though, not music, so I don’t know if it was a mistake or even the same person. Aeon’s production is definitely not a mistake though. There’s a light, minimalistic, upbeat swing to “Happy Valentimez.” As you might expect from the title this song was first leaked on February 14th, though I suspect people will be listening to it all year long.

“Yo; I ain’t tryin to be facetious
I mean let’s get serious
Ay – what the deal, what it do, whattup though?
Be for real girl – what the bid’ness is?
Like what’s the point of your company
if I can’t enjoy that company?
You make it so hard I can barely keep
But like an insomniac, no sleep
I’m bein sincere love, this is me
But I’m not gonna beg you to be with me
Cause, love is a risk worth taking
You’re in good hands, that’s my insurance
So I’ll/All State for the +record+
Don’t +play yourself+ girl that’s my message”

There’s a very natural and relaxed vibe to Soulbrotha’s flow that comes with the confidence in knowing he doesn’t have to rhyme every line to keep on spitting bars. The crispy snare taps and hi-hat emphasize the subtle humor and wordplay of his bars. So yes, this leak is a win. So is the next track “Maybe (I Love Life),” which has a more traditionally jazzy backdrop, which SB matches his flow to by injecting a little more swagger. “This is all real/that’s the motto I live by on the playing field.” At times he’s almost singing his flow, but keeps it in check and saves his real crooning for the chorus, which I appreciate greatly.

There’s a concern Matt Jost had that I can’t avoid addressing on an album this short though, and that’s Soulbrotha’s faith. I think we all know Christianity and hip-hop have had a contentious relationship at best, with the extremes on either side of the argument being allowed to dominate the conversation. On the right rap music gets the blame for all of society’s ills, rather than being recognized as the mirror TO those ills it truly is. On the left rap is seen as a way to bring an increasingly alienated youth to the Lord by relating to them on their terms, although that can at times result in cornball concepts like “drivebys for Jesus” no kid could possibly relate to. Artists like SB are left in the uncomfortable middle – wanting to affirm their faith without on one hand being cornball and without condemning the hip-hop of their peers on the other.

For my money (which isn’t much given this EP was free like BDP) I feel Soulbrotha has found a successful balance between the two. Perhaps that reflects five years of maturation as an artist from the time Mr. Jost reviewed the album until now. Perhaps that reflects five years of maturation onMY part, where I’m more open minded to rappers of all religions sharing their faith – Christian, Muslim and Jew and many others too. And perhaps the quality of Aeon’s beats makes things on “4letterwrd” more palatable than Roeg du Casq could. Either way I don’t mind hearing SBeezy sing “Jesus I live by your word” on the smoothed out melody of “Lord’s Day.” It’s a genuine finger snapper and head nodder, either in spite of or BECAUSE of the religious overtones. I think Soulbrotha could perform this song in front of a crowd of hardrock hip-hop heads and get over fine.

That’s really the most blatant religious song of “4letterwrd,” and if that’s as pushy as Soulbrotha is going to be about his Christianity, it doesn’t offend me at all. “Exceptional” leans that way too, but Shakara Weston’s singing keeps things in balance, and the lyrics are well constructed and delivered in a way that allows SB to flip up between going quickly or slowly – proving how nimble his linguistic abilities are. The bonus track that wraps things up is called “Bachelor Party,” and that should tell you that Soulbrotha still lives in the secular world – he’s not some chaste type of monk. I can see how some people might not feel the overtones, but the more I listen to the SB of 2012 I can’t see why anybody would object to it that strongly. Other than not using a lot of profanity there’s not much you can say that differentiates him from other rappers of the day, and last I checked there’s no law requiring you to actually USE four letter words to make a “4letterwrd” EP.