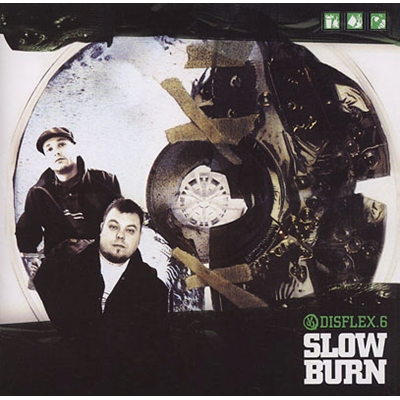 Y’know the brand of obscure hip-hop that you usually hear in skateboarding videos or some other untraditional forum? Well, that is the niche’ that Disflex6 find themselves in as they dwell in the California underground. “Slow Burn” is their 5th album and it truly sounds like they might have found their groove on this, a darker release than previous efforts.

Disflex6 consists of two members, Jason the Argonaut and Lazerus Jackson. Both members are white emcee’s but do not let that discourage you as they flow similarly to other West Coast underground b-boys such as the highly-respected members of Hieroglyphics. Jason the Argonaut has particularly made a name for himself over the course of the past half decade working with the likes of Murs and Jean Grae–often behind the boards. Jason continues his journey as a beatsmith on this release with varied styles but mostly quality results. He shares the workload with Elon.is who also does a nice job for the most part.

Disflex6 opens their latest LP with a track entitled “They Say” and even though it does not match the pure hotness that was Common’s track of the same name, it does manage to start the album with a bang. The most important part of the composition on this track an entrancing choir-like background vocal that matches perfectly with the dark, yet sing-songy hook that goes,

“They say the soul
Never goes astray
But it takes a toll
The soul, your fate”

This is a deliberately slow delivery, but breaks into faster flow for the verses. The only problem with this as an opener is that it is a little too deep for an introductory track if you have not heard Disflex6 before. Most of the tracks on the album continue down this dramatic path as their intent is to make meaningful music beyond purposes of just rockin’ a party out. The following track “Afterlife” is a similar exercise in depth.

The general theme of “Slow Burn” is dark even on bouncier tracks like the pessimistic “Never”. The chipmunk beat is one of the best on the album, but it is misleading at first because you would not attribute it to the possible unfortunate truths that are presented in the lyrics, like, “We’re never gonna survive, we’ll never make it” coupled with “Holdin’ it sacred is stupid, I’ll probably sell out.” Not that the group does not have the ability, but independent hip-hop can be a treacherous path.

Of course there are some faults on “Slow Burn” with forgettable tracks like “Spitting Image”, “Milky Way” and “Deep Slang” that generally do nothing to make you want to come back for multiple listens. The aforementioned cuts are too mundane to get the head nodding.

Nonetheless, the general consensus is that “Slow Burn” is a seasoned album by some underappreciated California based emcee’s. Jason the Argonaut and Lazerus Jackson compliment each other as the former delivers rapid-fire deliver and the latter a more plodding baritone voice. You will not likely hear the name Disflex6 anytime soon on the radio with their darker themes, but that is not what they aim for–they aim to please their core fans who are the real hip-hop heads, or “backpackers” if you will and to that end they do succeed.