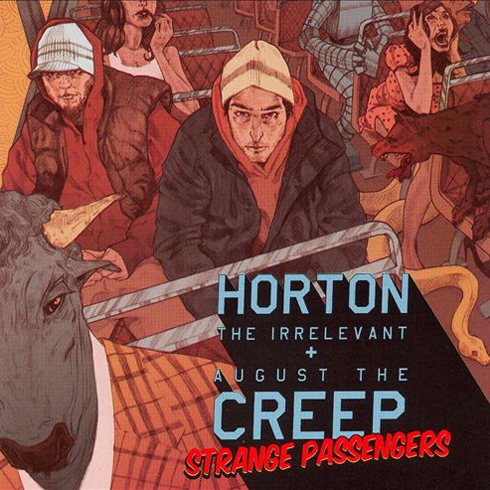 I’ve damn near filled my word quota for the review of Horton Irrelevant + August the Creep’s “Strange Passengers” LP by simply typing out the long-winded and slightly pretentious title. It would not be fair to end it without a proper description of this oddball album brought to you by a couple of creative individuals.

When lurking in the shadows of the underground it is important for a group to develop an illustration that individualizes themselves and, without question, Horton and August succeed to that end. The comic book influences are prevalent as a part of the paradoxical cover art that features a cartoon goat sitting in front of our two ‘heroes’ . Snakes and Robots also inhabit the bus, but who are the ‘strange passengers’, these entities or the artists themselves? The eclectic yet sometimes unfocused music that Horton and August create is intriguing, however, eclecticism by nature only leaves the audience entertained some of the time. There are very few hip-hop related groups that have been able to walk the fine line of varying styles with success which include only elite names like Wyclef Jean and arguably Andre 3000 (but wasn’t it better when he actually flowed!?). On the “Strange Passengers” LP in question we are offered an album that is solidly structured, often clever and still not for everyone.

Being an emcee from the vacant lot of the rap world known as Madison, Wisconsin, Horton the Irrelevant compares himself to the likes of Slick Rick, Ludacris and KRS-One, but honestly he does not sound like any of ’em. The pale comparisons does not mean that he is not competent when grasping the mic. Usually Horton has a slower and raspier voice than any of the previously mentioned artists more in line with Vakill or Cage. However, there are times where there are huge contrasts in flow that shows the range of Horton as a rapper dealing with his internal complexities. An indication of this split in style can be expressed when comparing the unconvincingly hardcore “3-Headed” with the wistfully playful “Save the Brunettes”, which is exactly what it sounds like it would be about.

“Save the Brunettes” succeeds in the same way that “June, July and ______”, which cleverly gets the producer August (fill-in-the-blank) the Creep some shine on the mic. That being, that these sample-heavy and more upbeat songs are listenable on multiple listens and coupled with the excellent “Problems”, fans of soul-influenced hip-hop will really enjoy these.

Meanwhile, the duo brings some haunting conceptual material to the table as well. “The Author” is about a letter written from a woman to the narrator, the woman upon the end of the story, ends her own life. This is probably the most well-written song of the album and the midway beat change expresses the drastic change in mood as the story gets darker and darker.

August the Creep stays behind the boards for the most part and his beats match the different styles pretty well. The aptly titled “Robots” sounds like a b-side to Non-Phixion’s “Black Helicopters” with the synthetic videogame inspired beat. Songs like, “Once Sold Truths” and “The Why” seem too busy with Horton’s sometimes erratic rhymes. Whatever the case, the beats are as unpredictable as the rhymes as none of them stick to simple, repetitive, loops and the dramatic backgrounds will have some conjure thoughts of beatmeister supreme, Stoupe of Jedi Mind Tricks fame.

Horton the Irrelevant and August the Creep take the listener on a 19-track journey with “Strange Passengers”, meaning that ultimately the title refers to those that pop this disc in a deck. It would have been nice if the concept of the album, a tale of love gone wrong, would have been more prevalent at times. That being said, there is still an undoubtedly high level of creativity and thought process put into the creation of “Strange Passengers”, but sometimes it seems like this eclectic twosome may be better off sticking with some tired and true formulas like tight samples and some more quality concepts and stray from the entirely strange.