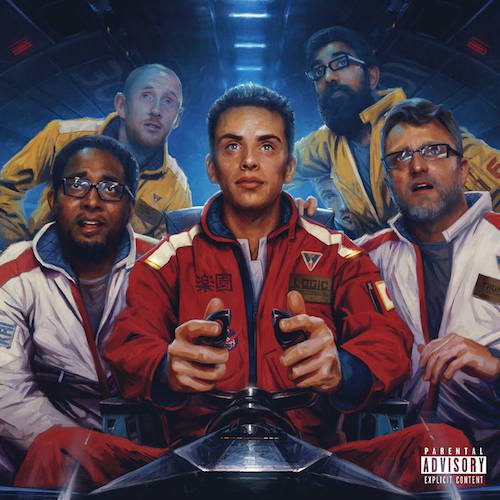 Logic is the “good boy” of Hip-hop, a young man from the projects who is determined to do better as he grinds his way to the top. He exudes positivity in all his interviews, and his frankness about the difficulties of his past and straightforward lyricism have built him a cult-like following of mostly middle-class young adults. Logic’s debut album “Under Pressure” focused on his personal struggles and the drug-riddled home. Now his sophomore project, “The Incredible True Story”, is a moment the young man is taking to appreciate his growth and where he’s at now.

The album is mainly narrated by two people on a spaceship in the post-apocalyptic world of 2115, heading to the planet Paradise. An electronic voice, Thalia, who narrated the last album, makes an appearance in this album again. Logic’s partiality to theatrical orchestral instrumentals and basic refrains echoes throughout the album. There’s enough variation in energy and production to keep the listener engaged throughout, and several times there are sudden drops into another beat entirely in the middle of a song. Drake’s OVO sound seems to have started this trend, recently used by the likes of Travi$ Scott.

Opening with music as grandiose and uplifting as the album’s astronomical theme, the intro slides into “Fade Away.” Here he shows off his rap skills with some impressive linguistic gymnastics, twisting and playing with syllables at Twista-style speeds. The track fades out to “Like Woah,” with jazzy lounge music, laid-back synths and a trumpet riff. In this track, Logic takes a look around and appreciates where his music has gotten him “I’m platinum in this bitch, I’m rapping in this bitch/ Runnin’ the game yeah I been lappin’ in this bitch.” There’s still no room for cockiness for the young people’s MC, as he notes he’s still “feelin’ like an infant in the womb.”

The album is densely sprinkled with references to hip-hop classics, tributing 90’s both with word and sound in “Young Jesus” and the opening bars of “Innermission.” “Innermission,” featuring Lucy Rose, is a monologue on the ups and down of his life woven into Nas’s classic lines in “Life’s a Bitch.” Logic plays with trap in “I Am the Greatest,” getting down with some grimy club sounds and halting delivery.

Logic shouts out all the bullshit, from race relations to a certain girl, in “City of Stars.” One of the best tracks on the album, it marks a transition into more painful, raw material compared to the purely celebratory songs in the beginning. Somehow, the pain makes it more profound. This begs the rhetorical question: Does pain make good art into great art? Perhaps not always, but in this case, some of his most moving bars on the album are undoubtedly delivered when he’s calling out hypocrisy. “I love hip-hop, but I hate hip-hop/’Cause people who love Pac hope Drake get shot/’Cause he rap about money and for heaven’s sake/Pac did the same shit just on a drum break,” he laments about the modern day divide in rap music. Despite this break into a more negative side, the album closes on a soaring neo-soul jam in a positive note. His message is clear in the refrain as he asks, “Who am I? So high.”