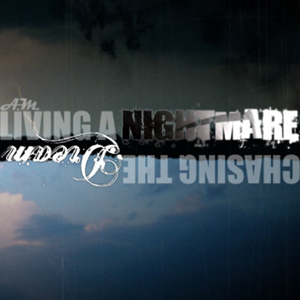 I got to know Abrasive Method (A.M. for short) by watching the video for their newest single, “Rescue”. It was a bad idea. If like me you think that rappers like Kanye West and Andre 3000 sometimes exaggerate about what a rapper should look like, then you’ll be shocked by A.M. Not because of their flamboyance, but rather because you have rarely seen two guys look more like average Joes. Pardon my shallowness, but because of that I was doubtful that I would like their music. For the most part, I was pleasantly surprised by their latest album, “Living a Nightmare, Chasing the Dream”. I shouldn’t have let first impressions discourage me.

Still an introduction is important. Classic hip hop albums have usually been started by classic intros. From old school favourites like ATCQ’s “Excursions” to new school ones like T.I.’s “56 Bars”, great openings are frequently indicative of what’s to come. In that regard, “Living a Nightmare, Chasing the Dream” starts off on the wrong foot with the song “Rescue”. The song is comparable to E-40’s “Captain Save a Hoe”, except the narrators are the ones getting played. That a rap group would begin their album with a song about how they had girlfriends that took advantage of them is startling to me. Since it’s also the first single, it’s as if they really wanted to get that point across.

The production on “Living a Nightmare, Chasing the Dream” is generally very refreshing. The soulful beats are the highlight of the album. Charlie Beans, the producer of the group, sounds like he was very much inspired by Pete Rock, but he manages to take that style and make it into his own. Songs like “High”, “Pause For the Cause” and “Chasing the Dream” have beautiful dreamy vibes and are a pleasure to listen to. “Chasing the Dream” uses a sample last heard on White Town’s techno-pop hit “Your Woman”. A.M. uses it in a completely different way, and the smooth sample chops bring back memories of DJ Premier classics like “Above the Clouds” and “Suspended in Time”.

Sadly for all the praise I give the production, I give the mix none. It’s not terrible, but it’s just not fitting. There are few songs on this hip hop LP that will make you bob your head. It’s as if the person who handled the mix wanted the music to sound like ambient techno.

The rant about introductions I started this review with highlights one of the main problems I see with rappers similar to A.M. Lack of charisma and self-pity don’t mix, like two dicks and noâ€¦.you know the rest. A.M. are at their best lyrically when they are being reflective or talking trash. When they get melancholic, they sound like whiny loser lovers. There is nothing wrong with being an everyman on the mic, but you have to make it appealing if you expect fans to buy it. Songs like the aforementioned “Rescue” and “Love Somebody” are exactly the kind a group like A.M. needs to avoid.

At twelve original songs and a remix, “Living a Nightmare, Chasing the Dream” is a tight little package, with only one weak spot in the middle. There is definitely more good than bad on A.M.’s latest opus, their third. I personally hope there will be a fourth. All this group needs is better mixing and marketing. If there were significant upgrades in those two departments, A.M. could have a really interesting product on their hands.