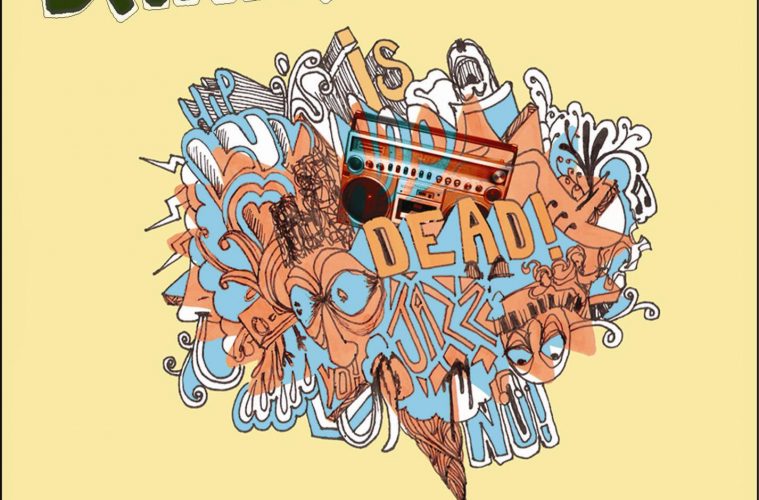 Despite the eeriely familiar title, broken flowerpots are nowhere to be found on the cover of “Danny Is Dead.” The underground sensation undoubtedly has the same thing in mind that De La Soul did on theirsimilarly titled album though, which is to distance himself from the already established cliches about the kind of hip-hop he does. Danny is already out there as “the best rapper you don’t know,” the underground’s answer to Kanye West as both a lyricist and producer, and the architect of “Charm” – easily one of 2006’s best albums. In fact “Charm” put the South Carolina native who had once seriously considered giving up on rap altogether on the short list for a Grammy, and while he didn’t end up winning it certainly caused scores of people to get a late pass and check out what Danny was all about. Soon enough Danny joined the Definitive Jux crew, and while they’re yet to release his Jux album debut you can find a free song or two of his on their website. (If you’re still not up on that late pass, download them and check him out).

It’s hard for any artist with as much talent and creativity as Danny to sit and idly bide his time while waiting for his new crew to push him to the forefront. “Danny Is Dead” is the release of pent-up frustration as well as the meeting of pent-up demand, allowing Danny to satiate his newfound fans while not disrupting his Def Jux relationship. While they are not releasing or distributing this short CD, they are also not dissuading Danny from putting it out, as his relationship with them gave the creative leeway to put this out. Thus we come full circle to the title again – you may THINK you know Daniel Swain already, but you have a lot yet to learn. First lesson – “Now You’re Back”:

“You off sides, better play your position
Like lost dice, I’m what the game’s been missin
D. Swain’s been fishin’ for compliments, my competence
Has been wasted, I ain’t seen my conscience since the spillage
Is he the illest? It depends who you ask that
Type of nigga to make a beat from violins and a hatrack
Humility, it stems from my cabbage patch
Rooted in my friends and my habitat, matter of fact
I chop a break fast for breakfast and
Beat a nigga to the punch for lunch
Dig in the bargain bin for dinner
The skinny nigga done made good
The media insists that I stay hood
But I never was to begin with
My penmanship is intricate
But Jay already said that it don’t get you shit!
So I would, write it if y’all would, get it
All y’all would-be critics must’ve mistook me for an idiot”

Nobody’s mistaking Mr. Swain for a lamebrain on this opener. In fact if anything I’d compliment him on the intelligence of his intricately constructed verbal delivery, which print just doesn’t do justice to. Incidentally any hip-hop producer who hasn’t dug in the bargain bin for records to loop ought to borrow that late pass from one of RR’s readers and take it to a church rummage sale. Danny may not have bought every undiscovered piece of vinyl that’s out there, but he’s definitely found some of the best judging by tracks like the slyly skipping and swinging “Press Conference.” Danny ably matches his flow to on-off tempo without sacrificing any verbosity or wit in the process:

“Yes, you in the three-piece?
‘I purchased your first three albums
But how do I find your beat CDs?’
Beats me; of course you COULD start down Limewire Avenue
Turn east on Kazaa Street and beep the horn at the main center
And tell ’em D. Swain sent ya
‘Is it true you went to the Grammmys
Off of the strength of ‘Charm’?’
Yes, I just extended my arm
I looked and saw my name on the ballot
But not enough votes were gained or tallied
Sad story, should’ve been nominated
for the ‘Overlooked MC’ category”

Combined with juggled samples in the chorus of Mos Def “niggaz don’t know but they front and don’t ask” and Biggie saying “you need to ask me,” the song is a whimsical look at the life of a rapper who blew up but is still completely misunderstood by the press AND his biggest fans. “Danny Is Dead” will definitely make a few new fans though with tracks like “Check it Out.” The song is a sly musical and verbal ode to A Tribe Called Quest’s “Find My Way” but with Danny’s own take on love gone wrong:

“We at the beach and I itch like I’m allergic to sand
But I put up with it to show you how determined I am
(You hurtin’ me man) Forget it, I ain’t tryin’ to set trip
Not dealin’ with nobody now that’s what you let slip
I said ‘Hey yo it’s cool, keep it on the friend tip’
Cause yo, picture me screwing it up
Like ridin’ dirty while I’m sippin’ on a brew in the truck
Sheeeit… you finer than J. Lo
But how can I move forward if you never say go?
Kisses on the cheek is what confuses me though
Cause out in public we don’t even speak so what’s the deal yo?”

Whether you’re an old school Danny! fan who goes all the way back to “The College Kicked-Out” or a relative newcomer who wants to figure out what Daniel Swain is all about, the short but sweet “Danny Is Dead” will fulfill all your needs. Trust in Danny and you will find two things remain true – the beats are on point and the rhymes are more refreshing than a bottle of Sprite. With a delivery all his own and a wit that makes him far from a nitwit, Danny continues to impress even though he’s declared himself deceased. Don’t be fooled – this rapper’s career is not only alive and kicking, it’s definitely on the rise.