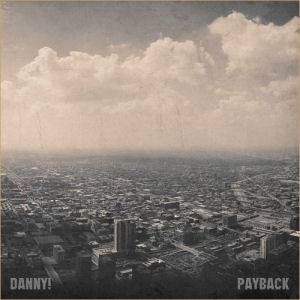 Here we are again with Mr. Daniel Swain, a talented recording artist whose travails in the tumultuous music industry we’ve been chronicling since he dropped “Charm” in 2006. At one point his stock had risen so high that indie imprint darling Definitive Jux signed him to a deal; ironically they could never give the rapper nor anyone else a definitive record release date for his album. “Where Is Danny?” was both the answer and a question, with his alleged label doing almost nothing to promote their signee, which ultimately led to a “Where Is Danny? 2.0

” released in 2011 with new beats and a new distributor – Interscope Records.

For fans of Mr. Swain’s music, the news that follows will be no less frustrating – so I apologize in advance for having this advance. The press release contains a tentative January 17th release date, which has already come and gone, but you won’t find this album for sale on his personal website nor at Amazon.com

. For what it’s worth the fact this album is now in my hands indicates Swain is as anxious to get it out to the press as to the public, so perhaps it’s a sample clearance issue (even though he meticulously lists all usage in his press kit). The album looks and sounds complete though – “Payback” is 17 tracks clocking in at nearly 80 minutes total worth of music.

Some of you may have suspected from the title that “Payback” is Danny!’s message to the music industry after years of being jerked around. You’d be right. The album takes the form of a narrative laced together by a series of skits, with our protagonist accused of various nefarious deeds, by unscrupulous law enforcement types who are more interested in a Cardassian system of justice. (For the non-geeks out there that means you are presumed guilty, sentence is determined before trial, and your day in court is merely a formality to show society the clockwork efficiency of their government.) Needless to say our hero will not take this lying down, and he has enlisted an impressively stacked arsenal of artistically able attorneys to leap to his defense. You could number these songs on a dart board and throw shots at random and you’d still be likely to hit a guest star considered among hip-hop’s upper echelon – sometimes more than one in the same song. Some collaborations you’d expect, like Talib Kweli and Chell on the track “Get Up”:

Kweli: “I keep it Brooklyn with my bars
while you lookin back to stars like Copernicus
Receiving my instructions from a burning bush, burning kush
From the moment that we born until we turn to dust
We quest for knowledge so the future generations learn from us
that God is everywhere, even right there in the mirror
Find me in the slums, Christ on my head like Indira Gandhi”

Swain: “Man, it’s kind of hard to stay positive
Positivity only gets you but so far
Shoot for the stars, you mess around get hit by a car
That’s just the cynicism seizing me
How am I supposed to motivate
when half these motherfuckers don’t believe in me?
I, appreciate your words of wisdom
I see ’em try to work the system
but I want to make the system work for me”

Some are a little more unexpected, such as Swizz Beatz, El-P, and Jim Jones on “Shit Starters.” You may want to read that twice to make sure you’re not confused: Danny Swain, Swizz Beatz, Jim Jones and El-P all on the same song, all at one time. Swizz starts the song, the other contributors close it, but Mr. Swain holds it down right in the middle with a hilariously over-the-top verse:

“I think I’m Seinfeld – Larry David
This beat I made, sounds very dated
But that’s okay (why?) because it’s crunch time
Big Shawn – that is the punchline! (Ha ha ha)
I push the flyest whips (what?) six TV’s
Your hooptie lookin busted, I call it chippy D
This rappin shit’s for suckers; you haters haven’t seen
a flyer motherfucker – fuck Fader Magazine!
Fuck everyone who doubts me (haters)
Fuck those who talk about me (bitches)
This ain’t no Ocean’s 12 (what?)
This here’s The Big Lebowski”

And there are more surprises. You might not have expected Earl Stevens and Danny Swain together, but once you hear E-40 on “Do It All Over Again,” you’ll wonder why they didn’t do it sooner. Critics might take the first verse personally, but given the consistently high quality of Mr. Swain’s catalogue, you might understand him being a little bitter about getting shortchanged: “They say he’s self-absorbed and only talk about himself/Motherfucker I’m a rapper, what the fuck is you saying?!!” Uncle 40 gives his young nephew some sound advice though: “I remind me of me, always was and I’ll always be/different than any emcee up in this industry […] didn’t nobody sign me, I signed me/did hundreds of thousands of records independently!” So who needs a label? D. Swain can be his own.

If Danny! was out to prove he’s respected on “Payback” the roster alone would send the message he’s well connected: Bruno Mars on “Evil,” John Legend on “Far Away,” Pharrell Williams on “Speed” and even today’s new generation of DIY rappers like Lil B on “Misunderstood” and Tyler, The Creator on “Hey You.” Really though that’s beside the point – the real “Payback” is that D. Swain doesn’t play second fiddle to any of them, even heavily respected artists like Tanya Morgan and Phonte. “Payback” is Danny!’s world, and they’re all just living in it. That’s his message to the industry, backed by his superlative beats, which have long made him one of rap’s most underrated producers. That’s probably because he’s mostly producing for himself, but don’t mistake him for being another Bandcamp bedroom emcee. There’s a decade of depth to D. Swain that shows in every bar, note, and beat of this “Payback,” one which should hopefully give the music biz a big smack in the face.