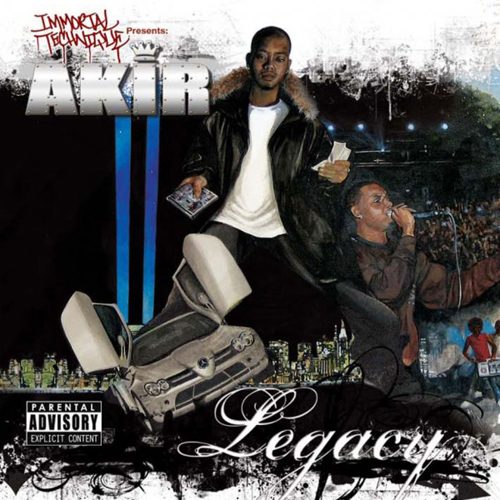 Akir is from New York, and it shows. He has a flow and voice similar to Nas. His beats share some of the somber sparseness of classic Mobb Deep, and the jazz influence of DJ Premier. He shares the politicized anger of KRS-One and Public Enemy, and the thoughtful lyrics of Talib Kweli. He even introduces his debut, “Legacy”, with Abiodun Oyewole of the Last Poets. Over a playful string-infused beat, Oyewole rails about the loss of the revolutionary ideals of the Sixties:

“We got high on Blackness
Held our black fists up
Told the devil to suck
And made a commitment to disrupt the world
Kill a cop a day
Give white girls no play
Make America pay for all her wicked ways
The shit was on!
Then it was gone
Just like an episode on TV
It got cancelled, and there was nothing to see
Panthers were turned into little pussycats
Revolution was commercialized
And had nothing to do with Black
[…]
But we never stopped making babies
They came out breathing the vapors of our aborted revolution”

That intro makes it clear where Akir is coming from. He is a product of 1960s idealism, with a healthy dose of Y2K realism. He is conscious without being preachy, street without glamorizing nihilism and materialism, and progressive without being boring. He doesn’t bother with talking about his whip or his jewels, and he doesn’t waste too much breath criticizing those who do. Instead he presents an alternative to hip-hop that crassly celebrates the hustle. His rhymes are full of people who dream of being rich and partying, but struggle to make ends meet, work shit jobs to pay the bills, and whose only options seem to be prison or wage slavery. On “Kunta Kinte”, he rhymes:

As much as I don’t want to reduce Akir to merely the second coming of Nas, I can’t help but hear a little “Illmatic” in Akir’s vivid, harsh descriptions of life. He paints a clear image of being a hungry young rapper on “These R the Blues”:

Even his romantic “Tropical Fantasy” is brought down to earth. While Akir rhymes about going to “Costa Rica Antigua or Dominica/Linens with a mean cuff shirt/Matching the sneakers/Ganja I reek of,” Jean Grae brings it back to earth, reminding him about “Dirty buildings and steel doors/The damn trap/Can’t blast out/Maxed out.” Then she tells him:

“See we already blessed
Forgetting the stress
They’re pennies, yes
But, see, many are without anything or less”

Like executive producer Immortal Technique, Akir has a political bent that is all too rare in hip-hop these days. He offers some astute insight into how African Americans are often denied voting rights on “Politricks” and attacks the incompetent, racist response to Hurricane Katrina on “The Louisiana Purchase”. Even beyond his content, he is an amazing lyricist: He raps on 19 tracks on this disc, and I didn’t hear one lame rhyme.

The music is equally solid. His One Enterprise production company handles the majority of the beats, with Akir sharing most of the credit, and handling the entire production on a few tracks. The beats range from acoustic guitar and strings on “Tropical Fantasy” to a more spare and sinister piano/drum combo on”Grind” and “These R the Blues.” “Homeward Bound” has a bossanova feel to it, and “Politriks” sounds as if it samples the soundtrack to a 60s thriller. The whole disc has a slightly understated quality that I associate with a lot of classic New York hip hop. Akir isn’t trying to hit you over the head with hooks or glossy production. Instead, he has crafted an album that plays on the strengths of its lyrics, and demands and deserves repeated listens.

I hope we won’t have to wait long to hear more from this talented rapper. With “Legacy” Akir has proven that he does indeed Always Keep It Real, that New York is still relevant, and that hip hop ain’t dead.