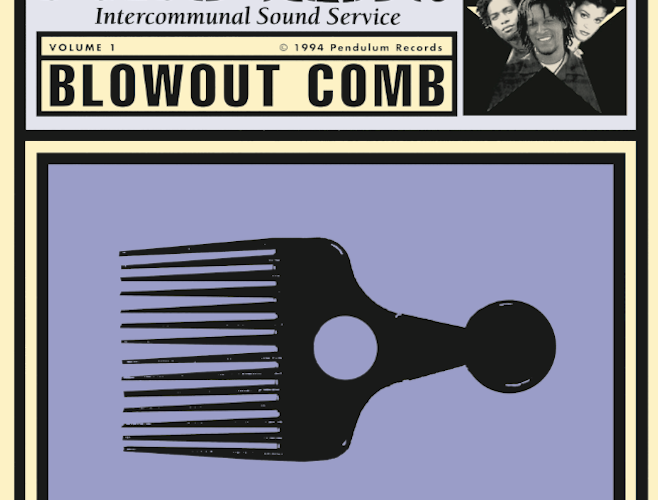 Did you know the commies made a short comeback in ’94? Not the ones you’re thinking about. The Berlin wall fell in ’89, after all. These commies wanted black folks to unite and stand up against fascist suit scumbags on their side of the ocean. But New York summers are way too hot for fur coats, military boots and march songs. So what do you do? Stay smooth. Not all revolutions have to be the violent kind.

You may front however you want on the USSR, but the Ruskies had better marketing appeal than Walt Disney. Colors: Red and Black. Craft: Pick and Sickle. Clothing: Lots of Fur. Position: Raise your Fist. Easy to hate, recognizable to the ultimate. The three musicians from Digable Planets took that consistency to their own borough of Brooklyn, New York and gave it the soulful swirl that spawned “Blowout Comb.”

“I shows, five seconds after that I flows
Left on contra rebel grows
Levels we grow
Jonesin’ on the curb, I glow
Still posin’ in b-girl freshest
This leftist gets with emcees one and all of ’em
Bust ninety bi evils
And my whole crew walk with pleasure”

“The May 4th Movement,” title of the song this excerpt is part of, refers to the zealous students who went on to establish the Chinese communist party. They overthrew the phat cats in power and ultimately learned China what nationalism was all about. Sister Ladybug and brothers Doodlebug and Butterfly wanted to teach some healthy nationalism of their own. Where the two Red giants went wrong by wanting too much too fast, Digable Planets kept their cool and chose to educateblackitolism to the people of Brooklyn first.

When Digable Planets released their jazzy debut “Reachin’ (A New Refutation of Time and Space),” the trio struck a nerve with the US listening audience. The single “Rebirth of Slick (Cool Like Dat)” went on to become one of the most hummed after tunes of 1993. It even got them an Emmy Award for ‘Best Performance by a Duo or Group.’ The line “We be to rap, what key be to lock” has been engraved in the beehive memory of the hip-hop community ever since. After that first impression, the people were standing in line to receive seconds of another scrumptious Cool Course Combo meal.

Mecca the Ladybug, Doodlebug, and especially Butterfly AKA Ishmael Butler possessed that rare combination of badass, brains and street buoyancy which makes your headphoned self glide across the pavement instead of stepping on it. Their inimitable take on hip-hop vocabulary was carefully backed up by crispy jazz piers standing in a sea of hazey psychedelics. Progressive hip-hop was at its peak in those years, with acts like A Tribe Called Quest vouching for a more mellow outlook on life. The Digables fit right into place in that transition period between jubilant party hip-hop and just-look-mean hip-hop.

Apparently, they didn’t want to fit in. Digable’s next project “Blowout Comb” traded in the fresh jazz breeze for an amorphous soul funk solid with less cuts and more live instruments. The zen-like “Graffiti” featured a vibraphone player and a fretless bass. Donald “Duck” Harrisson, one of the original members of Art Blakey & The Jazz Messengers, handled tenor sax and flute on “Dog It.” The successful single “Rebirth Of Slick” had used a sample belonging to these respected jazz cats. The slippery slang stayed, but the message behind their words, as Butterfly shows on “Jettin,” became more politically involved:

“I got raised by the dim street lights of four cities
My heroes died in prison: George Jackson
Action, she’s buttaflyin, I’m cool eye’n
And I rocks no low unless a scrambler got me
Me and my honeys, we be like Bobby and Erica
Me and my moneys, we’ll hurt you boulevard and pie up
One love, gun love come free the land with us
Pigs they cannot shoot this plush and creamy lavishness
Before I pop I’d rather die in baggy guess and timbs
And I put that on the B-K-L-Y-N and that’s
Funky”

The mood change in word and sound let down a big part of the listeners who jumped on the bandwagon after Digable’s debut. Except for the infectious “Dog It,” hit potential was drowned out by funky experimental drive. Sales figures for the album disappointed. In 1996, the group disbanded so each member could be on their own planet. But, like the short meteorite upstart and downfall of Jimi Hendrix, their legacy lingered.

The commie Reds had themselves a bag full of marching songs praising home base Mother Russia. The Digable comrades, who consistently used the colors black and purple in the artwork and lyrics of “Blowout Comb”, had Brooklyn for personal appraisal grounds. Their admiration for the NY micro cosmos of “block party/corner store/the downtown/the projects” was reinforced by the simple fact all members moved in from all points of the compass to be a part of that vibe. Their love went so far they only invited guest artists from around the block. Guru didn’t work with just anybody back then, but agreed to walk down to the studio. Butterfly respected the revered vocal part of Gangstarr, but the main reason he wanted Guru on the album was ‘mostly the voice,’ as he said in the Blowout booklet:

“The place where I dwell is where the warriors dwell
Too many stories to tell
So on the block we don’t talk
Stack of loot takin propers
Might get a serious offer from a corrupt ass copper
So um, stop the nonsense
Brooklyn is the illest, the realest
Observe these words as I reveal this
Man, my peoples out here they get down for this
Each one’s a one man gang with a crown for this
Mad burners to handle any business
And mad sneaky ways so I ain’t leaving any witness
Got way more drama, the theatrical lessons
So my suggestion, you come correct no question
Cause if you comin with that funny hot dog style
You might get looted, executed black mob style
From East New York back to Ft. Greene
Brooklyn’s classic mystical magic scene”

“Borough Check” is, partly by Guru’s presence, one of the most earthbound tracks on the album. “Graffiti,” with its nervous bass and airy vibraphone, could almost be classified as meditation music. Jeru the Damaja, the other Brooklyn resident on this recording, is almost unrecognizable because of it. “For Corners,” is a carefree ode to the block these three believed so strongly in, and it took them seven minutes to finish. This warm bath of offbeat rhythm patterns and breezy sax breathed perfect city summers.

After more than thirteen years,”Blowout Comb” still is a household name in some circles. I am not sure if the cause of that long lasting memory is the buttery phat instrumental antics, the beclouded wordplay, or just the magnetic attraction that these really cool cats radiated. Communism may have lost the battle, but kids are still walking around in Che Guevera t-shirts.