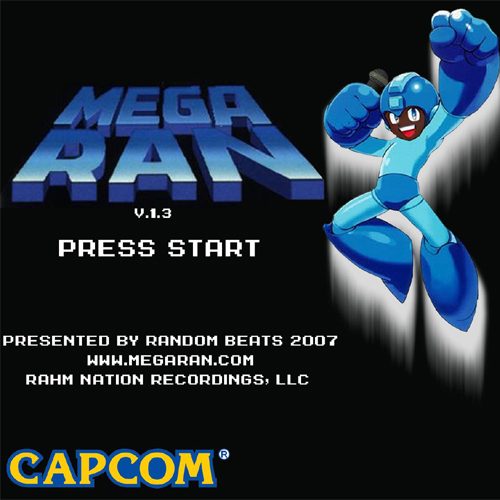 Recognize this blue robot? If so then you’ve undoubtedly either played one of Capcom’s many verbose underground MC named Random calling his new album “Rockman Ran” would ALSO have resulted in the point being lost in translation. It’s better that he go with the name more familiar to the small amount of fellow hip-hop heads who have played these games on NES, PSX, GameCube, et cetera.

Then again that audience may not be so small after all. The game has inspired several television shows over the years and one even spawned a soundtrack in 1995 which included tracks by Junior M.A.F.I.A., Sugar Ray and Inner Circle. If the legacy of the blue robot can survive twenty years and running on the fringes of pop culture then the large underground following of hip-hop heads, video game junkies and fellow nerds may all rush (no pun intended on Rockman’s faithful dog) to the store to pick up “Mega Ran.” Unfortunately while some of the melodies from Mega Man games sound fine when remixed they tend to largely fall into dance & techno categories. When producers have tried to merge Mega Man’s theme with more mainstream pop hilariously bad songs are the result. This presents Random with a daunting task – pay tribute to a character and series of games he’s obviously a fan of while not (A.) making a mockery of the games or (B.) driving away the underground rap following he’s already cultivated. Few would dare to cross the threshold for fear of commiting career suicide, although for Random the overwhelming odds may present an eerie parallel to the Mega Man games themselves. Many’s the time Mega Man has found himself outgunned and overpowered only to emerge victorious over his foes. When the odds are against him, Mega Man’s iron will is stronger than ever.

“Yo, let me tell you ’bout this dream I had
I woke up in some weird scientist’s lab
Standin next to a dude in a white coat
It had X. Light on his pocket protector
Had this big blue helmet on
And a big cannon in place of my right arm
He said, ‘Mega Ran, what you don’t remember me?
The power charge must have took some of your memory
We gotta go, Wily’s got another plan’
Man who are you, what happened to my right hand?
The Doc said, ‘I got no time to explain
This isn’t a joke, no time for the games’
Yo, this all remind me of a game I played
Back when I was a young boy, like 5th grade
Step outside and the sky’s all pink
Explosions everywhere make it hard to think
‘Thought I could trust Wily, but I shoulda known’
Then over the horizon, I spot a big dome
The Doc said, ‘That’s it, yeah right there!’
That’s what? ‘Dr. Wily’s secret lair!'”

Thus Random explains the plot for the know-nots on the “Intro,” set to the music from the epilogue of Mega Man 2. Things are off to a pretty good start here as the flow is solid, the beat is stitched up smoothly, and Ran sticks to the topic without sounding embarassing. “Shadowman” improves on things even further. The stage of Mega Man 3 it’s culled from has one of the heaviest melodies of the original 8-bit series, so it’s well suited to being looped for hip-hop purposes. (Incidentally Random has a misprint on the back cover of his CD, he lists this as from MM4.) Ran laces a strong drum track with additional OOMPH that the NES couldn’t provide and then comes off the dome with fresh rhymes. They aren’t necessarily about Mega Man thematically = here he’s just spitting hot verbals:

“Aiyyo we get it done, I’m in and out like a hit & run
Chances of me fallin off slim and none
Wanna take my mic you better get a gun
Don’t be fooled; he might seem tough
but he only a cream puff, spittin what he dreamed up
And on the real I got better unreleased stuff
I can’t hear him, Fermat’s last theorem
Ran’s the future and y’all so last year with it
I creep through the dirt with verses like serpents
Worthless jerks get earthed beneath surface”

Solid vocals, solid beats, solid breath control and solid scratching between verses makes this one a winner with or without the post-boss fight powerup. It’s a shame the entire album doesn’t show the consistancy found early on in the proceedings. There’s more to like than not if you’re a fan of Mega Man or Random but on the songs that miss it’s like shooting at a met with his helmet down – no damage done to your eardrums whatsoever. “Bubbleman” from Mega Man 2 just doesn’t loop that well, but if Random was so insistant on using it he should have tried a slower rap flow as he sounds way out of sync. The short musical interlude for the same game’s password screen also seems a poor choice for “Robot City,” and even though producer DN3 tries to jazz it up a bit the song is still watered down by uninspired guest vocals from JonBap and YTCracker. I even have to do a little bit of nerdy nitpicking on how he mixes up his characters and terminology. While Ran creates a smooth loop out of “Aqua Man” from Mega Man 8 for “Aqua Soul (Robot Love)” it’s all to the good, but the girl he falls in love with on the track is Dr. Cossack’s daughter Kalinka and she’s from MEGA MAN 4. The “Megalude” and “Continuation” tracks that finish the tale are dope but they sample from MEGA MAN 6. Putting small points like these aside most of Random’s attempts to jack beats from the games are on point, particularly the ones like “Flashman” that are self-produced and mad witty verbally:

“I wrote a verse for you and all of y’all who doubt me
Run it back like ‘Oh snap, he talkin ’bout me!
Build it up ’til the amps is leakin
Leave ’em shook like Kramer at a Panther meeting, whoahh!”

Even if you don’t know a damn thing about Mega Man and have no intention of playing the games ever, tracks like “Mega Club” and the Domingo laced “Rock and Roll” still work on a straight up hip-hop basis. One of the album’s most pleasant surprises is “Boss Battle Metalman,” which takes the original Metal Man music and gives a hard rock guitar groove befitting the stage’s name; put another way it’s what Timbaland’s “Throw it on Me” could have been if The Hives weren’t musically insipid insects. Still I’d be remiss not to note this album’s very premise appeals to me, as I’ve gone out of my way to buy games from the series like “Rockman Strategy” that were never released in the U.S. I’m down with Samik looping the Mega Man 6 boss music for the song “Final Battle” but I can understand why anybody who hasn’t played the games wouldn’t appreciate it, even with the extra drums and bass added in. The bottom line is that Random manages to keep his hip-hop credentials in tact even while marrying underground battle raps to video game tracks, but this album may still be a hard sell to hardcore hip-hop heads. Random may have a little better luck with the mainstream, but that depends on just how mainstream Mega Man really is. Besides that even if Mega Man has a broad appeal it’s probably more among the younger demographic than adulthood’s closet nerds. I just don’t see Random’s album outselling Kelly Clarkson’s but for hip-hop heads if you can find it in stores I encourage you to give it a try.