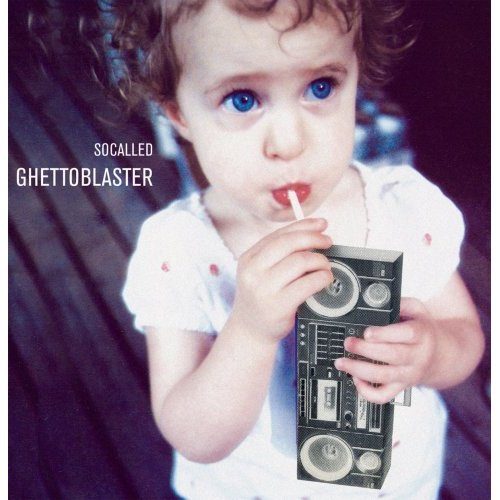 Here is a little mind game. Take all the prejudices you might have against Canadians. Now, take all the prejudices you might have againstJews. Count them up inside your head. Got room to spare? Compare your results to a Jewish Canadian/Canadian Jew producer who has every Naftule Brandwein * record ever put out, is one of the best Badchen ** of Calgary, and sometimes says between lunch and breakfast: “And frankly, there is nothing so unusual about being a Jewish cowboy.”

If there was something like a Hip-hop Conservation Society, they would immediately ban SoCalled as soon as he’d step through the door. Looks can be deceiving, but a mad professor-looking like gentleman with a men’s shirt all wrinkled up because of the occupied accordion strap over his torso could become hard to explain to the goy *** heads.

But what does SoCalled care? This evil genius is playing tedious mind games by putting a sticker in the jewel case with suggested favourite tracks, thereby corrupting my impartial judgment. His manager over at Fanatic Promotion included a sticker with the menacing handwritten message: “Stay in Touch! -Andy.” And, in a YouTube-interview on his MySpace page, he explains he got all his records from garage sales, the Salvation army, and the garbage, just because: I don’t really like to go record stores.”

Is there a method to this Kanuck madness? As a matter of fact, yes. If you manage to get past the initial feeling that all little kids get when they smell broccoli for the first time (could be just me), you will find innovative beat thoughts on “Ghettoblaster.” The jittery Balkan fiddle, followed by uptempo jazz trumpet over rock drums and a whiff of tap dancing on “These Are The Good Old Days,” had me sniffing like a customs German shepherd at first. And I also had to deal with SoCalled fast-(s)paced verses:

“My god’s gonna kick your god’s ass
You’re too dumb, and I am the head of the class
Stop waiting around for something better
The boys that get better, the tighter the sweater
F#ck it, take what’s hers: don’t sweat it
You can owe a dollar, just pay on credit
Two to your left, and four to your right
You gotta fight for your right to fight”

His rhyme style, most reminiscent of the nasal tone-of-voice of The Streets, sounds as eager as his desire to throw in all the styles he could dig up at the Salvation Army. SoCalled doesn’t discriminate by any means on the other twelve tracks by using salsa, funk, rock, sheltis, drum’n bass and lots and lots of Klezmer. **** He utilizes his AKAI MPC 1000 as much as he can, but the impressive 42 guest musicians (I counted the Four Freres as one single entity) reveal there is a lot more than meets the ear.

His eccentric charm also lured some members of the Hip-hop Conservation Society through the steel gripped gates. On his first album, Josh “SoCalled” Kulgin worked with the sphynxical Wu Tang icon Killah Priest. On “Ghettoblaster” he found a Def Jukie willing to meddle in the mayhem. C-Rayz Walz does a classic Christmas appearance-at-the piano to bust a crooning freestyle over some contemplative piano keys (“Slaughter Intro”), and does a full appearance on “You Are Never Alone”:

“Bounty on my head
Spurs on your feet
We are out-of-towners
The county gives us grief
Iron horses, we gallop at light speed”

With all his oddities, is there any way of seating him after smuggling SoCalled past the gates of the hip-hop realm? He has some of the boyish bashfulness of Edan, and the inquisitiveness for quirky experimentation of the Beastie Boys. But that is only on the tracks which incorporate some nice drum patterns. “Rece Cica” is such a flurry of styles it is tricky to keep track of a consistent feeling throughout the song. Since that is normally one of hip-hop strong points, it would be a nice experiment to let SoCalled produce a full album for an MC of his liking.

This isn’t jeep music. It isn’t rocking chair music. It certainly isn’t bedroom music. Frankly, there is nothing so unusual about knowing where the heck to play this. Let’s just stick to the whole house and the backyard. Avalanche me as much as you want, SoCalled, as long as you keep that creepy manager off my back.