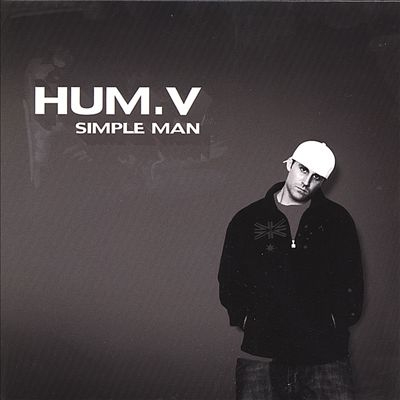 This is a cheap shot. But this chorus, thought up by the American dolmen of rock Lynyrd Skynyrd, was the first find when I processed the words simple and man through the Google search engine. I couldn’t think of any other way to introduce “Simple Man,”the debut album of the Indiana artist Hum-V.

“Can It Be All So Simple?” Ghostface Killah and Raekwon once asked themselves that question, and it is a damn hard one to answer. Is simple simplistic? Is a man whose phrases stretch no longer than three syllables for every word a simpleton? Is the ‘simple life’ exclusively kept to those growing up with loving families in sheltered communities? Being simple can be as tricky as balancing a boiled egg on your nose while hot coals are fire-tickling your toes.

Simple is an even more difficult word in hip-hop music. Some Aesop Rock fans will frown upon the to-the-point metaphors of Atlanta superhero T.I. Some O.C. fans will choose his simple, yet herculean punchlines over the evasive word-weaving of Sage Francis every single time. Even within these two examples, the world simple slowly slips into the Twilight Zone.

In all his actions, Hum-V tries to pursue that slippery quality. Being simple. A simple man. Or simply a man. Hum-V, whose family name is Gregory Thomas Humrichouser, was brought up in the small rural town of Ashland, Ohio. His parents, judging by his surname, hardworking folks of German ancestry, gave him the happiest moment of his life, as he testifies on the country ballad inspired “Simple Man”:

“Seen many faces, I met many people too
I made the best of life, and not many people do
I set some goals in life, met every single one
I got regrets, but on looking back I realize: that shit was fun!
I learned so many lessons, I saw so much take place
But nothing could replace the look on my mother’s face
That night I did a song, I saw her in the crowd
There’s nothing better than making her and my father proud
And that’s a feeling that money could never purchase
A feeling so overwhelming that everything else seems worthless”

His folks look like gentle people. You can see them in full-color on Hum-V’s MySpace-page. The featured slides show an almost picture-perfect aftermath of a careless childhood. Gregory with his girl, happily smiling at a wedding. Gregory with both his parents, outside club “The Patio” some time before a performance. Hum-V acting as wolf pack leader in a pre-show group huddle. Hum-V, performing for a hyped, local Spring Break audience.

Is it all fresh lemonade in the rocker on the patio for this MC, who wholeheartedly admits to beeing “raised in the middle-class.” Hum-V, whose voice could easily be mistaken for a Light-version of former teen idol Fred Durst, offers an All-Star America alternative to the anguish many artists extract their inspiration from when they try to “Move the Masses”:

“And I can’t rap about my life in the slums
In fact, the population is mostly white where I’m from
Shit, I just started off by listening and writing for fun
I had no clue that I was working with a lightning tongue
But now it seems as though I got you bitches biting my crumbs
We’re going swimming, motherfucker, better tighten your trunks
‘Cuz even though the game is backwards, Imma turn it around
Just sick of watching all these rappers crash and burn to the ground
When half of y’all making these records don’t deserve to be down
I’m laying verses like they are homicide, murdering sound”

Hum-V puts himself on the other side of the societal fence lyrically, but also chooses to circulate inspiration over beats echoing music from beyond city limits. Campfire acoustic guitars dominate the sound of songs like the autobiographical “Find What You’re Looking For,” “Every Word,” and “If I Had A Dollar.” Bass and drum computer take a backseat on these road trip kind of ballads, which gives the album a rather country outlook. Hum-V carefully makes sure he doesn’t go off-beat on these songs, bolstering his past accomplishments as if he wants to inspire his audience to choose the same path he did. “Can It Be All So Simple?” As far as Hum-V is concerned, yes it is.

“Man, I’ve been working hard and slaving, I’ve been busting my ass
And I survive a nine to five, and I ain’t making no cash
With all this debt I gotta wonder how much more I can take
‘Cuz lately just for me to live I’m spending more than I make
I want to get this money, but I won’t sell drugs
And not a radio station in this city will show me love
I won’t lie like these other rappers claiming I’m rich
Claiming I’m that, claiming I’m this
It’s making me sick”

To balance things out, there are also a few weak spots in Hum-V’s shiny armor. The above song “Broke Again,” deals with his problems getting ahead in music and also getting enough Dead Presidents in his apartment every month to have an occasional party. The acoustic guitar is traded in for an electrical blues guitar, and producer Vinyl Ritchie blends in vibrant piano keys with passionate background vocals to craft arguably the best track on the album. “Just Like Them,” Ritchie’s other production on the album, is one of the other highlights on the album with its’ soldier-boot-kicking-gravel’-beat and solemn violins.

Hum-V succeeds well in aspiring to be a “Simple Man,” with humble aspirations and firm trust in his own background. That also places him in a category between MC’s who deliberately want to sound simple and MC’s who want to avoid to be considered simple at all cost. It is a good thing I can cheap shot myself out of this review by using the final chorus of Lynyrd Skynyrd’s song:

“Boy, dont you worry… you’ll find yourself. Follow your heart and nothing else. And you can do this if you try. All I want for you my son, is to be satisfied.”