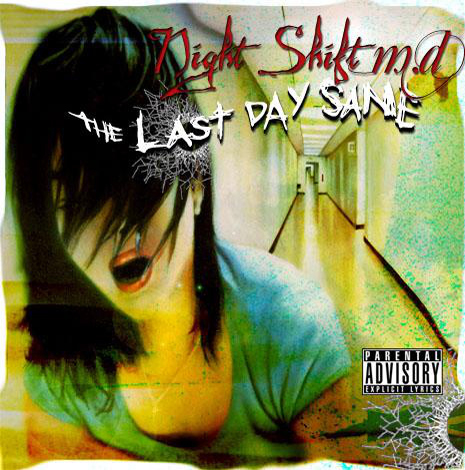 Horror-core is like the hip-hop equivalent to opera music. Scratch that. It’s like the hip-hop equivalent to polka. It’s never been particularly easy to find; even a seasoned head, ears to the street, will have trouble finding it in mass quantities. The demand isn’t high because, frankly, the genre itself is something of a bust. It failed long ago, as the initial intention of actually scaring people with “6 Feet Deep” was never brought to fruition. Still, there has been a recent revival, as it was realized there are indeed many a sadistic motherfucker who just happen to like some dark ass shit.

Night Shift MD fall nicely into the modern niche of horror rap, the same one that’s home to freak shows Necro, Ill Bill and Cage (the latter of which is undergoing the seemingly natural transition to emo bitch). The New York duo, made up of Kardiac and Space, get gritty on “The Last Day Sane,” although at times is can be painfully obvious what their major influences are.

Anyone familiar with the genre won’t be surprised with anything on “The Last Day Sane.” Lyrically (and sometimes musically) it’s over the top, almost with a death metal feel. The album tries to maintain the theme of life in a whacked-out insanity trip. Not so much on the Dr. Octagon tip as it is on the safer, horror show tip. Still, though they might now bring anything new, they do very well in not completely derailing, while most horror acts are a shoe-in to go flying off the tracks.

Space, who’s collaborated with aforementioned shock rapper Cage, has the upper hand on the mic, complimented by a voice that fits his style to a tee. On the production end, Kardiac’s beats are dark and heavy, often splicing a dash of rock guitar. It wouldn’t be out of line to compare to Necro.

“Mr. Friday’s Audition Calendar to Rejection,” aside from an outrageously horrible hook (“if you thinkin’ you can fuck with us, you must be fuckin’ crazy kid”), sports a sporadic backdrop complete with meandering keys and chimes. “Drugstore Cowboy” is a downright sinister beat, and Zehl Christ laces a mesmerizing piano number with “She Loves me Not.” Otherwise, the production sounds too similar and the beats hardly vary. Creepy old clips from news shows and movies start out adding to the “horror,” but end up annoying and a waste of time.

If it weren’t for such monotonous production, “The Last Day Sane” would easily bash heads with the giants of the genre, as both Kardiac and Sane do more than hold it down on the mic. Keeping from embarrassing themselves is worthy of praise in itself, but either emcee paint vivid pictures on more than one occasion. I quote Space: “head for the hills where they sell pills and niggas ain’t real, I call it home.” “Girl Interrupted” even sounds like a b-side off “Hell’s Winter.”