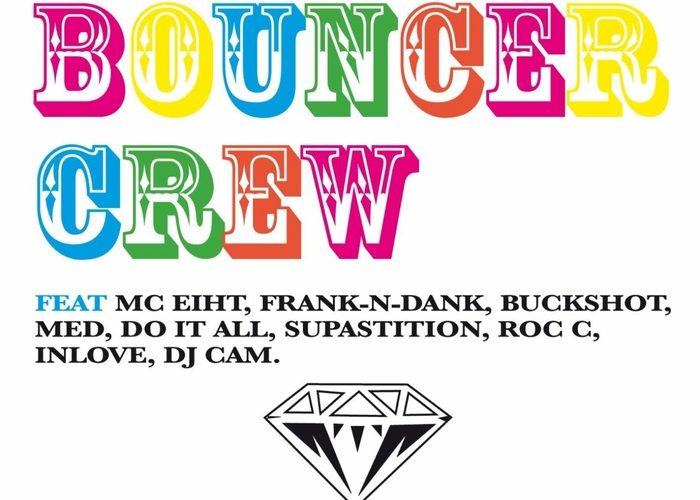 Bouncer Crew :: Xtasy for the Ladies

It’s “Xtasy for the Ladies” night in the neon-lit Diamond Club. Owner DJ Cam is behind the wheels of steel, and he’s looking grumpy. His lounge/jazz club in downtown Paris is barely filled with two dozen bored looking local tricks, looking to get laid for a bundle of cash. His well-supplied security staff is bored into oblivion. Cam wishes he employed local muscle. An American Bouncer Crew does wonders for his rep, but they are starting to harass the female costumers. Vocal seduction techniques aren’t agreeing with their female French subtleties, and the complementary Sex on the Beaches are running out. It’s gonna be a long night.

DJ Cam has been injecting underground rap music with jazzy beats since the mid-nineties. Parisian native Laurent Daumail, who sips from the same instrumental watering place as DJ Krush and DJ Shadow, didn’t get due recognition in his home country, and started connecting to MC’s abroad. Cam started out misty and abstract, coalescing jazz basement melodies with pounding bass, but drifted more towards soulful nu-jazz with every album he put out. The turtleneck sporting beat digger always kept the guest vocals to a minimum, with Channel Live dropping lyrics on the earlier “The Beat Assassinated,” and Gangstarr’s Guru making several appearances on later productions. On “Xtasy for the Ladies,” Cam acts as production leader for a full-fledged Coast to Coast MC staff for the first time.

“I got this beautiful thing that I do for my women
Respect them, love them, show them that I’m caring
I love a little mammie who cares about her appearance
But at the same time: I don’t care what she wearing
I dig ’em because they dig me and my philosophy
I light a lighter baby, as long as you don’t bother me
Not to be cruel, I’m trying to speak logically
You say you want a brother who always speaks honestly
Honestly? I’m more than what I gotta be
Happily, ‘cuz no man’s half of me
My strut is different, my lean is too”

After she’s heard “Let’s Rap A Taste On It,” the luscious Michelle yawns excessively and sips on her sixth Martini. Lord of the Underground’s Do It All struts off confused. He could have sworn his swagger flow and suave suit-jacket would win her over in seconds. He eyeballs the DJ booth with a mad frown. It must be the the warped keyboard keys, Indian sitar, and jiggly bass line that put her off. Meanwhile, Frank N Dank are harassing a Congolese girl with braids near the wardrobe.

Angered by his staff’s nerve, Cam fires up a fast-paced cut he was keeping to bring this theme night to a highlight. The hungry Supastition jumps on stage and clings his rhymes tightly to the synthesizer supported drums. For the first time this evening, Cam sees some movement on the dance floor and he vows to give this MC a raise as soon as “A Love Supreme” has come to an end:

“I’m a franchise player, y’all little dudes get benched
Even in Paris I’m the shit, dog, excuse my French
It’s me and DJ Cam, forever we stay fam
Let’s get this paper up front, like it’s a pre-paid plan
Now it’s official: Supastition keeps it poppin’ out in France”

When Stones Throw’s MED steps up to longlegs Marie-Joseph, and starts commenting on how he will “make her wanna “Climax,” the evening relapses into Monday night lethargy. Madlib’s protege loses his cool when he nears the ominous looking blonde. The mellow disco beat he wants to convince his prize prey on doesn’t help. After he rhymed: “No teasing/Reach climax/Heavy breathing/Damn sheets freak/Hear the bed squeak/Sleep in my arms/Wake up and reach for me, but I’m gone” she lets her Sex on the Beach wash ashore on his face and leaves with her entourage.

Instead of overseeing what his junior staff is up to inside, head-Bouncer MC Eiht is outside perfecting the seventh layer of polish on his “Lowrider.” While his boss flips on a nostalgic West Coast piano composition with P-funk peaks, he contemplates on the fleeting nature of skirt chasing as he sees the female audience disappear into the rainy night. He shrugs and continues dreaming of his next ride:

“My ass goes up with ease
And the desert eagle close, if I gotta squeeze
Bitch please, don’t lean on the hood
I spent all day trying to clean it so good
Bumps in the dumps, fifteens hump
Standing too close, homey, we gonna thump”

Cam tears into his staff, just before he fires the lot on the spot. After the grouching bouncers clear off with their final paycheck, Cam stays behind alone, assessing where he went wrong. Sampling the classic P-funk just ain’t enough these days to fill up the club, and his drums are overwhelmed by crunk and Down South crews in neighbouring venues. Dispirited, he plays the record he intended to end the evening with. He even named it “Bouncer Crew Theme,” to honor his new -now former- employees. The medicated fingerpops and serene horns give the heavy bass more authority than anything he tried tonight. Replaying the sophisticated tones of the last tune in his head, DJ Cam switches off the stroboscopes and the bar lights. Scratch the ladies nights for a while.