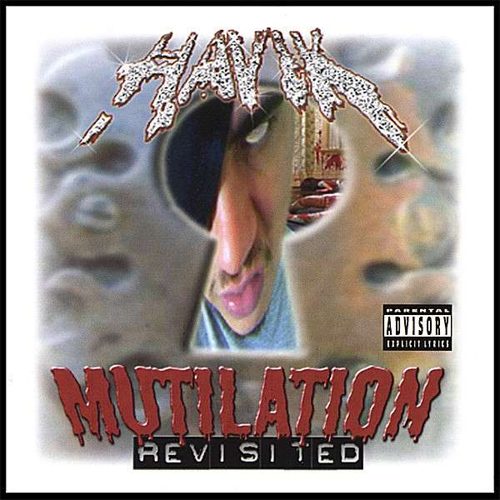 Havik is another from the long list of releases from the Long Range Distribution family known for their music that focuses on the ‘dirty’ of rap music. The violence and misogyny is expounded upon to a high degree on discs like “Mutilation: Revisited” that are labeled in the ‘horror core’ subgenre of rap. Havik seems to have taken his fair share of psychotropic drugs based on the narrative his album takes. The atmosphere of the album is purposefully set as a viciously dark one. Havik attempts to set himself apart from the growing number of artists that use their words to offend and disgust–a task more difficult than it may seem.

Havik, or Reak Havik as he is also known, is a quick-fire rapper. He originally released his first solo project in 2001 entitled “666 Degreez of Mutilation” which only made the radar if you are his good friend or neighbor. He continued to build on that success and built enough of a demand for a revisit to some of his EP’s that were released subsequently, most notably “Mutilation”. “Mutilation: Revisited” is a reworking of the tracks from these little known EP’s and song previously unreleased material to create his most widely pressed album to date. He is similar to a Bizzy Bone in terms of his attempt of flow, however his words are less defined and often they seem like they are just blending into one another which is not a good thing because it is difficult to tell what he is trying to say. Honestly, there is not a lot of the unexpected coming from the rhymes he spits though, so you are not likely to feel like you are missing out on some profound lyrical exercise.

Havik does surprise in the sound of his album, particularly the opening tracks “Dirty Deceased” and “Home”, respectively. The surprises in that most ‘horror core’ albums focus on low-key eerie beats whereas these two are synthetic and bouncier than most. “Dirty Deceased” beat is an echoing track with snappy drums that sounds like it sampled a dance track. “Home” harkens old west coast cuts with its siren inspired sound and dragging, low bass line. The problem is that he is not saying anything beyond how violent he is with the most clever lines being something along the lines of the pun empowered “Murder-us, hell no, we’ll murder you!”

The most detrimental aspect of this album that makes it feel unfinished is the simplicity and repetitiveness of it all. In fact, the chorus to “Pain Killer” is just that with the following: “Pain Pain Killa Killa Drug Drug Dealer Dealer/ I got the shit the shit that’ll fuck with ya!” His abrasive voice only makes this non-sense even more annoying to listen to. This is just one example but Havik will find himself rhyming one word with the very same word on too many occasions, or reusing phrases like the one previously praised (Murder-us, hell no, we’ll murder you) but more importantly is the fact that the diction is never thought-inducing at all.

The featured artist deserves credit for attempting those eerie tracks that make up a ‘horror core’ classic with songs like “Lemme Dye” (not sure why it is spelled like that) that sound like the background music in the woods of an intense horror movie. Unfortunately in this instance the chorus once again is a major problem with the overabundant use of the title phrase. He seems as if he is just talking grimly over the beat in what could easily be an improvised performance. This is the only time on the album that he strays from his manic flow into something more discreet but it perhaps fails even worse than the rest.

Another chancy track is “Live & Direct” which is a simplistic loop of a pounding drum beat in the way “Grindin'” by The Clipse was simplistic, but Havik does not have the lyrical presence of a Malice or Pusha T and almost certainly never will. Therefore, the song ends up being another nuisance.

It is apparent now after 13 piercing tracks why he dropped the ‘Reak’ in his first name. Never while listening to “Mutilation Revisited” did it leave an impression that I would want to revisit it anytime soon. Havik seems to simply rap quickly with no real direction for the words that he regurgitates. None of the songs have a sense of story or depth. The atmosphere of the album is dark, but it does not make the skin crawl or hairs on your arms stand up in fear. Even for the gothic teenagers that this stuff appeals to, this album does not divulge deep enough into the disgusting, nor does it find its place in a grim place of believability in order to succeed.