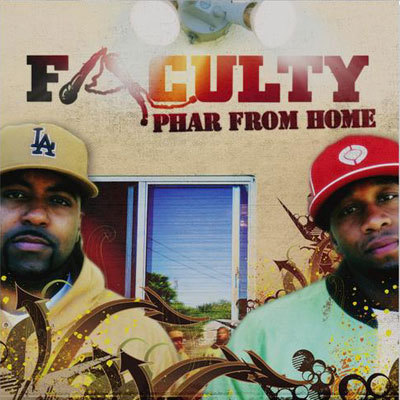 “Phar From Home” is the debut by Faculty, made up of MCs Mr. Mondell aka Blue Juice and Trigonometry. They hail from Oxnard, a city as beautiful as its name. If their origins weren’t obvious from their beats, then the 8-minute long phone message featuring shout-outs to the 805 will clue you in.

The sound of the disc is pure Oxnard, in the same vein as Lootpack, Madlib, and Oh No – funky, jazzy, and underground without being backpack. Production is handled by Oh No, Jake One, Vitamin D, Protest, and Beatminerz. All of the beats on the album are good, and most of them are great. “You Know Who” is built around plucked strings and snare snaps; ” Shake That Shit” is punctuating by strings stabs; “Move” has slightly skewed brass loops which reminded me of a twisted blacksploitation soundtrack; “Wickedest Sound” and “Run Shit” have a dancehall vibe. My favorite track was “Feel It”, which is pure bounce.

One issue I have with this disc was that there aren’t actually that many songs here. There are 16 tracks, but four of those are skits and two are short instrumental interludes. That is approaching Ghostface levels of filler, and it messes up the flow of the disc. The ten actual songs on “Phar From Home” would have been better served without all of the filler, especially not the aforementioned phone message track, which is unlistenable.

My other issue with Faculty was that their rhymes don’t always live up to their beats. I wasn’t that into either of their flows, and while they are both decent on the mic, they don’t stand out from the million of other aspiring MCs out there. They also drop their share of lame lines like “Keep it cool like a black nigga in the shade.” For the most part, though, it’s average party rap like on “A Lil Sum”:

Their lines aren’t bad, but they aren’t great either, and their competent but not overachieving style somewhat hinders the album. They do try to take it to another level occasionally, like on “He’s Mine”:

“I really can’t accept the fact
That my sons play a middle in this marriage crap
They’re my sons, I’m their father, I’ma speak my peace
My heart is humble for my sons
They’re a blessing to me
Three years I wipe snot followed by hugs
Show them right from wrong
And how to spread love
It was me
Their father
That put on their socks
And made sure every week their favorite cereal was bought
See the big things are cool but the little things count
Used to lay in your daddy’s arms until you straight passed out
At night giving you a bath was my pleasure
That was quality time that we both shared together”

It’s a surprising but welcome display of affection in a genre that is more often concerned with the activity of making babies, not taking care of them. There are lot of rappers that have kids and will mention their seeds in verse, but very few who have dealt so openly with the love they have for their kids.

“Phar From Home” has some banging beats and some decent rhymes. I wished Faculty had more verbal fire to match their music, but they’ve still created a record to be proud of. With Oh No and Madlib also dropping records recently, the 805 is definitely a force to be reckoned with in 07.