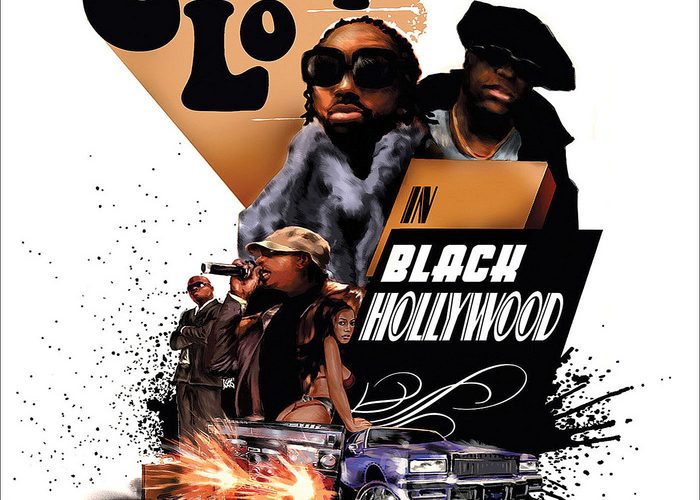 Sometimes musicians set too high of a standard with their debut records. In the music industry the first disc is almost always the album that makes the artist a name for themselves, but some say that the success of the sophomore album is really how you can judge longevity. This theory may fit particularly well when contemplating Sonny Cheeba and Geechi Suede’s place in the hip-hop history books. The two dynamic emcee’s have been relative ‘milk carton’ rappers since their ultra-slick and groovy debut, “Uptown Saturday Night” back in 1997. The long-awaited follow-up, “Let’s Do It Again” failed to rekindle the magic that once was and faltered into obscurity, no thanks to some pretty pitiful promotion. Now, Camp Lo is back for another run with “Black Hollywood” as many nostalgic fans hope for another classic, yet has the duo worn out their welcome?

Perhaps Camp Lo are their own worst enemy. They have typecast themselves as the 70’s blaxploitation divulging crew that makes fun music. It is precedent they set for themselves with such a fresh debut. Nevertheless, the Bronx-bred emcee’s never really went anywhere despite the fact that there seems to be a long hiatus between each of their proper full-length releases. A rare EP entitled “Short Eyes” was a five track exercise released in 2001 that showed that they hardly had lost a step, but something went awry between that and “Let’s Do It Again” as most of the latter seemed tired and bland–a difficult feat for such a cool group. Similarly, last year they warmed up with the “Fort Apache Mixtape”. The group has found a home in the form of independent label Good Hands Records (also expected to release Killah Priest’s upcoming effort, “The Offering”). Many of the songs from that mixtape find their way on this, in reworked full versions, the third official installment of the Camp Lo legacy, “Black Hollywood”.

The mood is set properly with “82 Afros” featuring Ski Beatz. Ski, is their long-time collaborating producer, who is also known for his work on another classic New York debut known as “Reasonable Doubt” (see “Feelin’ It” and “Politics As Usual”). “Afros” has a backdrop that literally sounds like an electrical current, starting muted and building into something more. The fast-paced flow on the track from the featured artists is fitting, whereas the beat, as nice as it is, does not remind the listener of classic Camp Lo. However, Camp Lo makes it clear that they know their identity with the excellent “Soul Fever” that is far more airy and feel good than the previously mentioned track. Like most of their choruses, “Soul Fever” strives in it’s own simplicity by continuously trading the phrase ‘soul fever’ with ‘soul diva’. The tracks run at an average of only about 3 minutes each, which keeps the party going.

The middle of the album finds Sonny Cheeba and Geechi Suede experimenting with a more updated sound. “Pushahoe” and “Suga Willie’s Revenge”, handle this task extremely well. “Pushahoe” is a snare drum driven track that rides out in celebration of it’s vocal sample “pushin’ my rhymes like a pimp push a hoe”. It is the perfect joint for club break dancing. Meanwhile, “Suga Willie’s Revenge” focuses more on a meandering flute and absolutely thunderous bass line. There are certain points, like in their prior releases, that the two really are not saying anything lyrically, except it becomes clear that it does not matter in light of the velvety smooth vocals.

There are no true low points on this album. Rather, there are simply moments that do not match the intensity of the rest of the album like the opener “Posse from the Bronx” , the overly repetitive “Zoom” and the slightly Caribbean tinged weed smoking anthem, “Ganja Lounge”.

The fairly spectacular “Sweet Claudine” and title track more than make up for short moments of inadequacy. “Black Hollywood” is vintage Camp Lo complete with jazz horns and a soulful vocal sample that bridges quite nicely into the hook, so it is not a disputable choice for a lead single. However, the emotive “Sweet Claudine”, that plays out as an ode to all good women, belongs on a movie soundtrack with it’s positive lyrics ultimately undermining player ways.

At just under 36 minutes, it feels like “Black Hollywood” is still incomplete and a little less precise than their masterful debut. This LP finds the duo teetering on that line of excellence. Certainly, Sonny Cheeba, Geechi Suede and producer Ski Beatz’ collaborations are more on point than their prior release “Let’s Do It Again!”, which was a pretty big letdown. Camp Lo did not let the sophomore jinx theory distract them though. Instead, Camp Lo have retooled and nearly perfected their style of slick 70’s inspired hip-hop songs that get the head nodding. Most importantly, the oft-forgotten veterans give their fans a taste of the past and leave us yearning for more.