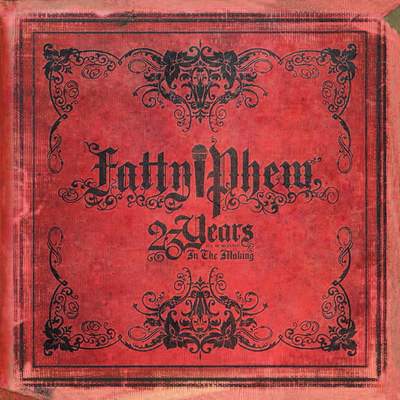 Lately we’ve been getting more and more albums from Australia to review on the site and I couldn’t be happier. For anyone to feel our opinion is valuable is great, for our site to hold that honor halfway across the globe is even greater. Fatty Phew is the latest Australian rapper to get covered on the site, though it seems that many of the Australian rappers know each other and collaborate. As with most of the Australian rappers I’ve come across, my opinion of Fatty Phew’s “23 Years in the Making” is a good one. Hailing from Geelong, which looks to be a suburb of sorts of Melbourne, Fatty Phew gives us a look at the hard knock life down under. Outside of having an unfortunate name that conjures up memories of Fatty Koo, not much bad can be said about Fatty Phew.

As is the case with many underground emcees worldwide, Fatty Phew tackles double duty as producer and emcee on his album. “Cause and Effect” is a mellow track highlighted by long flowing strings and accented by soft piano notes. The subdued bass line keeps things flowing smoothly as Fatty Phew runs down his life history in no particular order, from getting kicked out of school three times to juvenile hockey teams. “Ment To Be” features another laid back beat as Class A joins Fatty Phew for vocal support on the hook and for a verse. Fatty Phew spits an especially compelling verse presenting his take on fate:

“It all happens for a reason, the blackness that I’m dreaming
The passion that I’m needing, I’m just happy that I’m breathing
Purpose of living, all the hurting of earning been given
Average joes work, earn a living serving the system
Murderers in prison, getting the death penalty
All the forgotten memories, I guess it’s how it’s meant to be
The 21st century, the world’s changed hardly stopping
All the way from the world trade to these Bali bombings
Breaking up with young love, wishing I was dying
Now she’s got a man and a baby, man I’m happy that she’s smiling
The poor live in poverty, the rich win the lottery
My mind’s all written in the celestine prophecy
To be or not to be, great minds dead or alive
Meant to be emphasized like the Jewish genocide
Never Again! But it had to happen, more than once
Because Europe wasn’t liberated after World War I
Without war there’s no freedom to take, it’s not easy to make
All the greedy eating off the needy’s plate
The hungry feeding, they haven’t eaten for days
There’d be no freedom without Lincoln freeing the slaves, they needed escape
Without Christ being crucified, there’s no light to the star
Without the music of life, there’s no loops to let loose on this mic
Mentally forever be this energy this entity
Eventually it’ll be the death of me the way it’s meant to be”

While Fatty Phew’s raps can have a dark tone at times, he has plenty pf uplifting material. “Not Giving Up” hits us with sinister strings that sound straight out of The Godfather. Phew’s verses traverse the darkest moments he’s faced but in the hook he reminds us he won’t give up no matter what. “Inspiration” has a more uplifting mood around it as Fatty Phew elaborates on the concept of “Not Giving Up” by explaining the reasons he won’t give up. “All I Want” features Spit who spits as fierce as Fatty Phew as they trade verses about their love for Hip-Hop. Track six kicks in with Austin assisting on the vocals as Fatty Phew flips some guitars for the beat and lets us know how he embellishes in his underground status. Most Australian rap is probably considered underground to U.S. consumers, but even in Australia I imagine Fatty Phew’s non-big city roots make him underground there.

After what is pretty much the halfway point of the album we get what are two of the album’s weaker tracks. “In A Cipher” is a series of battle raps that are only decent:

“Sexy Beats” is also disappointing only because it’s nowhere near as hype as advertised in the press material, mostly because the beat is more of the rugged hip-hop found on the rest of the album. “Nightmare” gets things back on track as Fatty Phew and Autism give us their take on horrorcore, which is better than a lot of horrorcore in the states. “Insomnia” wraps things up and is also a darker track, which is where Fatty Phew excels.

At ten tracks deep, “23 Years in the Making” had very little room for error and for the most part Fatty Phew comes through. The average consumer would probably want a few more tracks, but you still get plenty of quality music. As countless other rappers have already proven, there is quality hip-hop coming out of Australia and Fatty Phew is as good a provider as I’ve heard. Two weaker tracks on a ten track album do hurt the overall quality more than average, but Phew still gets props for the 8 dope tracks. While the quality reflects the 23 years it took Fatty to make this album, one can only hope his next album doesn’t take as long.