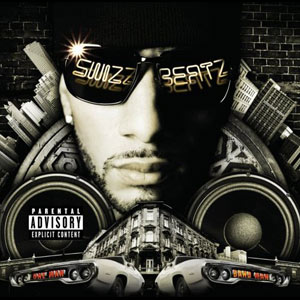 “We keep coming back with more and more hits.” It’s been 18 years since Nice & Smooth crooned those words but many of today’s top hip-hop producers fit the description. Just Blaze, Kanye West, Timbaland, Alchemist, DJ Premier, Rick Rock, and Swizz Beatz – just a few of many names who do it and then do it again. Swizz Beatz? Yes, Swizz Beatz. While doing a little research for this review I was astonished by just how many hits Swizz Beatz produced I had forgotten about. “Touch It” by Busta Rhymes. “Upgrade U” by BeyoncÃ©. “Candy Paint” by Bone Thugs. “Party Up” by DMX. Swizz keeps coming back with more and more hits.

I must confess I once referred to Swizz Beatz’ production style as “dropping a Casio keyboard on the floor and jumping up and down on top of it.” Over the years though one can discern just how much Beatz has changed and grown in style. While Swizz Beatz definitely has the quantity when it comes to doing tracks, it’s the QUALITY that matters most, and the quality of Swizz’ beats has continued to improve. Swizz dropping a hot single for a rapper is a known factor, and we’re all used to hearing him shout himself out on the tracks, but when “It’s Me Bitches” hit the airwaves it was quite a revelation.

“Smoke good eat good, drink good fuck good
Come into the club stuntin like how you should
My shit on fire I don’t need no gasolina
I’m comin through your block with the new two seater
Ring the alarm man, call me the sandman
When I drop beats I’m the one man band man
Cash rules everything around me cream get the money
Dollar dollar bills y’all fuck it”

It’s not as if Swizz Beatz hasn’t released a solo album before but last time he was doing the producing and letting other people do the rapping. This was entirely unexpected. There are plusses and minuses to this change. On the positive side Swizz has picked up a thing or two from producing for so many other rappers. He’s not spitting with the cleanest diction ever, but he’s far from embarassing himself. Self-production is another plus, because he can pick exactly the right kind of beats for his style and make sure they blend perfectly. Best of all as a promotional gimmick it’s hard to beat being a “One Man Band Man.” If you do your own beats AND YOUR OWN RAPPING then you’re truly in control of the outcome. It worked for Danny, it worked for Kanye, hell a lot of self-produced rappers have been very successful in hip-hop over the years. One thing’s for sure – if you’re not paying anybody else for vocals or beats you can stack a lot more “Money in the Bank”:

“Now… what y’all wan’ do?
Wanna be ballers? Shotcallers? Brawlers?
Give me your number I bet she ‘gon call ya
Come on dog, she want you to spoil her
Christian Dior or them new Fendi bags
Anything is good cause it’s better than she had
She sittin at the bar and she lookin so sad
Talkin about – uhh, I wanna ride in your Jag!
Uhh uh uh, I wanna ride to your house
I said ‘Easy chick, I fly to my house’
I, live so far think I live down South
Why don’t you pull it out my pants or PUT IT IN YOUR MOUTH!”

Oh that’s right – we haven’t talked about the negative side yet. Lyrically speaking Kasseem Dean is no Daniel Swain or Kanye West. Honestly he’s not even Diddy – and he rips the first two lines from “It’s All About the Benjamins” right at the start of “Money in the Bank.” Props for staying thematically true to the greed driven pursuit, but it still seems creatively weak. Swizz Beatz has a tendency to spit catchphrases from the greatest hits of other New York rappers from Akinyele to Method Man, but he hasn’t really developed a style beyond that. “Take a Picture” exemplifies the problem. Even though “Lovely Day” is one of the most oversampled tracks of all time, it’s still a beat worth jacking for a track – the problem is that Swizz’ rap adds nothing of substance to it whatsoever:

There’s a litany of problems here. The first is that Swizz Beatz’ rhyme writing style is about as A to B as you can get. Keeping it simple may be the best way to go when you’re inexperienced but even a simple rap doesn’t need to rhyme “haters” with “haters.” The phrase jacking is also in effect here as Swizzy references the hip-hop classic “The Message” but it comes off weak since he doesn’t have the deep resonant voice of Melle Mel. Then there’s the vocal problem with Swizz’ rapping – occasional shoutouts don’t let you hear enough of him to notice but entire songs expose his vocal tone in an unflattering light. Swizz’ raps gravelly but not in an aurally seductive way, delivered breathlessly but not intentionally like LL Cool J, and the delivery is often more monotone than Guru or Jadakiss on their worst day. With no disrespect to Swizz Beatz he was not born to rap. He could work on writing better rhymes, he could improve the musicality of his delivery, and even at the peak of perfection he is capable of he would still be a mediocre MC with a rather singular range of topic – making and spending money.

“One Man Band Man” is still a decent album despite some serious flaws with Swizz’ rap ability. Since production is his strength, it’s a strength that definitely shines through in head-nodding beats. “Big Munny” is the classic Swizz beat – so simple you actually miss some of the layers of complexity in drum track and melody. “You Know Your Boy Did That” borrows lyrical style from “The Bridge is Over” but the beat is some futuristic sci-fi shit that nobody else has come close to producing. “The Funeral” rings bells, plays pianos and rides along smoothly like some old school R&B shit. Swizz doesn’t have nearly enough guests to break up his flow, but Drag-On makes a welcome appearance on “Bust Ya Gunz” while the “It’s Me Bitches (Remix)” features Lil Wayne, R. Kelly and Jadakiss. In short “One Man Band Man” is a summer 2007 album – it doesn’t have a lot of staying power for the future but it’s relatively harmless inoffensive fun from a man who chose to do his own rapping for a change. Most of the beats hold the weight even when the lyrics don’t so if “It’s Me Bitches” or “Money in the Bank” work for you this is an album to cop when it’s on sale.