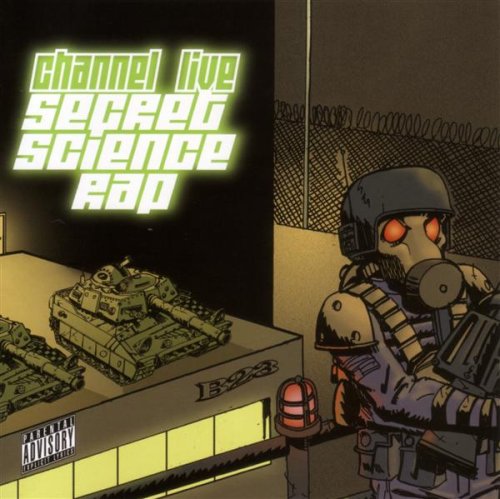 Channel Live is still around? Who knew! I can’t think of a single record since “(Spark) Mad Izm.” Oh wait, didn’t they try to come back on some “Armaghetto” shit a few years ago? Didn’t cop that. I seem to remember one video though where they dropped the consciousness and tried to be on some New York rah rah straight wildin’ out. The last place I expected to see them pop up was on Draft Records, the vanity label of Non Phixion rapper Ill Bill and his Uncle Howie. So what are Hakim and Tuffy up to these days? Are they thuggin’, buggin’, sparkin’ blunts and baggin’ stunts or is “Secret Science Rap” a hint that they’re on that illuminati shit? Maybe they believe in global conspiracies and future technological wars and they’re on some Vinnie Paz slash Immortal Technique shit. Curiosity got the better of me and I plunked down the hard earned cash to find out. “Secret Science Rap” starts out promisingly enough with “Buck ‘Em”:

“This is secret science rap, eff them radio niggaz
Gotta get this off my chest, cause I’m feelin the liquor
Pour a little for my dawgs benchin weights and readin
On some chump charge, in the yard, shanked and bleedin
I’m your worst nightmare, a black man with a plan
Like Malcolm standin at the window with the thing in my hand
Any means necessary with some gangster shit
We bang like orangutans with a gang of clips”

The Mike City Flowers beat is not overwhelming, but it would slip easily into any Dead Prez record and not seem out of place – and the same goes for the politically and militarily active rap. “Still Building” is even more unapologetic and assertive:

“Yo – I was at a label and the man implied
That if I didn’t sell drugs, I wouldn’t get signed
He said I didn’t look like I was lockin the block
And that his whole rap roster was chompin to rock
FUCK THAT! Fuckin crack got our people insane
While we commercialize the drug, and sell ’em the pain
Everything we spit goes right to the brain
And now your little brother out there sellin your chain”

I’m feeling it. Channel Live seems to have gotten their swagger back and Mike City Flowers has found just the right note for them to rock on. The tempo is slow, the bass is low, and the ambient sound is dark and moody. This isn’t necessarily an album you’re going to party like a rock star to. The topics are dead serious, from the scathing critique of George W. Bush on “Mr. President” to the equally self-explanatory “Middle Finger” and “Amerikka.” The only problem with doing Dead Prez is that Dead Prez is ALREADY Dead Prez, so M-1 and stic.man don’t really need any carbon copy clones doing their same form of pissed-off raps over amped up beats. There’s also somewhat less to the album than meets the eye. One of the tracks listed on the cover as “My Bloody Carpet” is actually a five+ minute skit that’s not funny in the least. Also for whatever reason half of the songs on this CD are actually just instrumentals, starting with “Let Me Flow” and ending with “Forty-Fours.” Mayor and Nel make some good beats and these are fine to listen to, but this wasn’t advertised as the Channel Live/Mayo and Nel double EP.

When it comes right down to it there’s nothing wrong with the “Secret Society Rap” that Channel Live are spitting on this CD. They may have slowed down a little from the pace they set a decade ago when they debuted, but they’ve definitely rediscovered their message and rededicated themselves to a rap that’s as assertive and unapologetic as “Free Mumia.” Don’t be tricked into thinking this is a full-length album or that Channel Live are doing anything new or revolutionary here, but don’t take this rap duo for a joke either. Channel Live still has something to say in 2007 and the message comes through loud and clear.