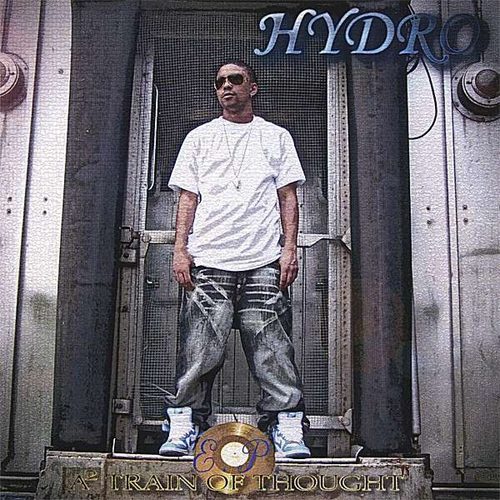 “Fakeness is embraced, how can I escape?
Everybody feeling what the radio dictates”

As alluded to on the album’s introduction, escaping the underground will be a huge challenge for Hydro. While the mainstream hip hop scene is fixed upon huge, banging productions and street credibility, Hydro goes a route that stands completely opposite of what is popular. More easy listening than crunk or snap, Hydro’s “Chillmatic” imprint is a perfect moniker for him to perform under.

Of course, the problem with making laid back music in hip hop is that there is a fine line between laid back and just boring. On “Train of Thought,” Hydro toes that line dangerously, sometimes stepping over it. His delivery, lyrics, and beats (he produces or co-produces the entire album), are all nice, but they can also be yawn inducing.

The tone of this album is set by the production, which, as stated before, is closer to elevator music than crunk. That’s not to say it’s all bad, individually none of them are. However, they are all around the same feel and tempo, and even in the short (27 minute) span of an EP, they quickly become monotonous. Only “When We Ride” breaks this mold, sounding as if it came from a “Lord of the Rings” soundtrack. And as the second song, “When We Ride” only sets the rest of the album up for a let down, as the rest fail to create any sort of momentum.

Hyrdo’s delivery seems to be dictated by his production, as he raps in a half-whisper that only adds to the listener’s boredom over the course of the EP. Like the beats, his delivery isn’t half bad, it just gets old very quickly, as there is very little variation in tone or intensity. Almost immediately, it’s hard to focus on what he’s saying, because he says it in such a demure manner.

This vibe dominates the album, and even Hydro seems bored with it, losing focus as much as the listener is bound to. Most of the time, Hydro seems to wander within his verses, unable to maintain a theme. There are exceptions to this, like the highly conceptual “Call Me Africa” and “Dreams,” where Hydro is at his best. The former sees him comparing himself to Africa, while he describes his sleeping process on the latter (which works better than it should, complemented by a similarly dreamy beat). “Call on Me” stands easily above the rest of the album, the only occasion where the music, lyrics, and vocals mesh together perfectly, an infinitely soothing song.

Still, even when he loses focus, his lyrics are still appealing. When he’s not focusing on a specific theme, it’s the single lines and casual observations that stand out most. Lines like “don’t believe in God, but I see the Devil everyday” strike the listener unawares among less memorable lines, further creating a drifting effect within the album. He’d need to be a much more consistent lyricist to make this album exciting, but he flirts with greatness enough to make it worth a listen.

In the end, neither the beats, rhymes or overall sound of this album is particularly weak, they just don’t work together for a whole album. Hydro has good potential as a beat maker and writer of rhymes, but “Train of Though” seems to catch him developing point; not good enough to truly stand out, but good enough to arouse interest. “Train of Thought” is worth the casual listen it provides, but to inspire an actual following, Hydro has quite a bit of growing to do.