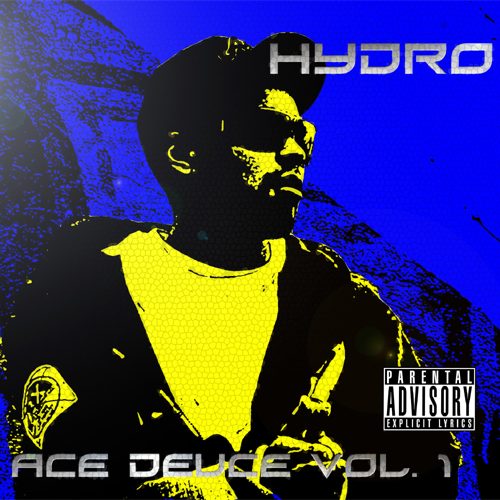 As a Columbus native, I can’t say I have a soft spot in my heart for Ann Arbor, MI (we take our football seriously), but sometimes we are put in these tough situations where we have to objectively analyze an aspect or bi-product of the state; in this case, an independent rapper that goes by the name of Hydro. Far too often, a rap critic like me will whine about how the rap scene is watered down with a plethora of emcees who have limited talent and lack intrigue. Much to the chagrin of my Columbus roots, Hydro is no such mediocre artist, which is illustrated with this great independent internet release.

“Ace Deuce Vol. 1” is actually an EP, considering its short length and running time just eclipsing 20 minutes. Yet in the short time that Hydro has to make an impact, he does just that. After reading this review, it is suggested you go to his website (www.myspace.com/chillmaticproductions) and download the item for free. This is not to undermine Hydro’s goals of becoming a rap star, but rather to widen his fanbase and create the buzz he deserves. Taking the route of many independents (and even some major label artists recently) the Michiganite rapper is happy to share his product to consumers for free for the greater cause of getting his music out there. Seeing that the experience is swift, a different approach will be taken in reviewing this material, discussing each track briefly.

Hydro is also the producer of his work – he does not enlist the help of internet producers or recycle beats from his favorite artists. The risk pays off because he excels behind the boards. The album kicks off with a fast paced snare drum and clashing percussion. After a few bars of Hydro’s confident and slick flow, a jarring vocal sample pierces the soundscape, repeating in a high, girlish, voice, “Do you know, do you know, do you know where you’re going to?” The result is lush. Furthermore, the majority of emcees think they can get away with a hot beat and leave it at that, but ‘Dro actually relates the infectious sample to his lyrics about the future, or lack thereof for those that get in his way.

This cut sounds like a whimsical Kanye piece, complete with the kind of celebratory type of sound found in “Flashing Lights” from “Graduation.” There is less substance to the lyrical content of this particular track, though. The song has a carpe diem (seize the day) message, about going out, getting a girl and enjoying the night without getting raunchy or unnecessarily involved in the descriptives of the activity that happens “All Night Long.”

You can probably tell what this is about on the surface level. Hydro tilts his Capitalist cap on this one as he declares his profound love for money. There are certainly a lot of songs about the cash, skrilla and cream – still, this is another banger. The tempo on this one is a little slower and soulful, due to a slower drum pattern. The artist personifies the dollar bill in clever ways with lines like, “It’s my baby, never going to leave me/Unless I use it, I try not, believe me,” and “When I don’t see them, times get tougher/Were not lovers, just helping each other.” There are points where some might consider this testament of love to the Benjamins slightly hokey, but he remains adamant and unwavering throughout the entirety of the track.

Track 4: “Laced in the Best” Feat. Prhyme and Excel

This track enlightens us on why Hydro adores his money so much. He obviously needs the money to keep laced in the best clothes. This being the only song with any features it is important to note that both Prhyme and Excel, despite sounding like computer programs, seem to be both quite capable rappers in their own right. This one uses a whistle-style beat atop a screwed and chopped style of chorus. It’s a good variation from the formula that otherwise seems mostly influenced by the likes of Jay-Z.

Here we have another hot symphonic backdrop. This track speaks on a taste for revenge and the end being near for Hydro’s opposition. Both thematically and conceptually, this one is very similar to “Do You Know” and it feels like the only time he really rehashes an idea on the album. His flow can prove to be repetitive too, as the rhyme schemes seem to follow a standard pattern. The track is still decent on its own right, but less poignant as the best he has to offer.

This is the epic concluding cut. It is complete with a dramatic choir sound, church bells and the most aggressively abrasive instrumental work. The concept of it is a dark one–Hydro exclaims himself to be the son of Satan. Some of the lines border on shock factor, when he expounds on severed limbs, but most are just self-declarations of how bad he is, like, “’nuff about you, just time I’m wasting/Nothing but a fake fuckin’ imposter/I’m the real deal, a fuckin’ monster!” The mood on this strays far from some of the other tracks and it can seem unbalanced when comparing it to the softer nature of the playful “All Night Long.” Finally, the track utilizes a classic Nas vocal sample which reiterates his own favorites as he apparently did regularly on first CD, “A2 Train of Thought.”

It’s hard to hate on Hydro. He is another artist trying to make it in a rap industry that has seen brighter days. He seems to be a pretty complete package between the slick image he presents and the even slicker material. At only 6 tracks, it is hard to determine just how good he is, but it is nice to see an aspiring artist that takes his craft seriously. He certainly puts the ‘potent’ in potential. It is with great anticipation to hear more from this artist as he grows and molds his style because with a little direction and detail to his lyrical content he could be amongst the top-tier (even if he is from Ann Arbor).