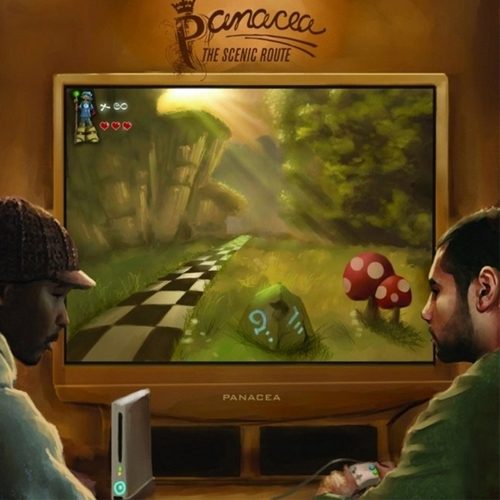 “The Scenic Route” is D.C. duo Panacea’s sophomore effort, coming just a year after “Ink is My Drink”. Their relationship with Rawkus is fitting; Like a lot of Rawkus’ past and present roster, Panacea are trying to take hip-hop to another level while paying homage to its roots. Panacea is comprised of Raw Poetic on rhymes and K-Murdock on beats. One of Panacea’s biggest strengths is that they are a collaborative duo who are responsible for the sound of the entire album, rather than the more typical scenario of a solo rapper pairing with ten different producers. The result is that “The Scenic Route” sounds like an ALBUM rather than just a bunch of singles glommed together.

The intro makes it clear that “The Scenic Route” is not your average hip-hop record. Over a spacey sample, a voice that could do promos for PBS announces: “In life, there exist people whose imaginations are so wildly vivid that they often confuse what is reality and what is, in fact, fantasy. This is the story of one of those people, the story of a man who dreams awake.”

Lyrically, Raw Poetic is definitely not lacking in imagination. He has impressive skills, and creates some incredibly complex rhymes, with rhymes within rhymes and metaphors within metaphors. On the title track he spits:

He shows off some impressive verbal dexterity on “Aim High”, where he raps over an intricate jazz beat, which he matches with an equally intricate flow:

I couldn’t always follow Raw Poetic’s lyrical twists and turns, but even when I got lost, I still enjoyed his flow, breath control, and the way he effortlessly strings words together. His topics are on point as well, taking a decidedly mature look at relationships, love, and creativity.

K-Murdock’s beats perfectly compliment Raw Poetic’s rhymes. Murdock is obviously inspired by East Coast masters like Pete Rock and DJ Premier, which is evident in the jazz influence and crisp drum sounds on “The Scenic Routeâ€. However, Murdock is no mere imitator: he has a sound all his own, incorporating prog rock elements and other unusual samples to create something that references the past while blazing new territory. His production work is more polished than on “Ink Is My Drinkâ€, and the whole album has a nice, mellow vibe to it. This is definitely a headphone album, because there a ton of nuances that Murcock has inserted into every track, from the jazz guitar in “Walk in the Parkâ€ to the various old-school samples.

“The Scenic Routeâ€ isn’t the most banging hip-hop album of ’07, but it is one of the more enjoyable listens I’ve had this year. Panacea have created a cohesive, mature work that is bursting with creativity. I don’t know if “The Scenic Routeâ€ is a cure-all for whatever ails you, but it will definitely stay in heavy rotation on my iPod.