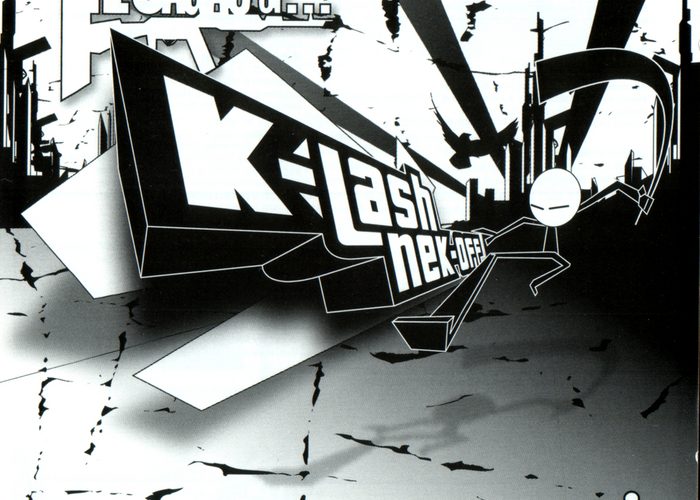 Let’s throw the traditional review manual out of the window, just for today. Here are the negative aspects of this album: maybe one too many skits. That is pretty much everything negative I have to say about “The Sagas Of…” by the man with various aliases â€“ Ricochet, The Black Russian, The Son of Niah…

For now, let’s just call him K Lash your fucking Nek Off!

Back in 2004, there was a growing feeling in the UK that hip hop was on the cusp of a big breakthrough â€“ listening to underground and late-night radio shows playing more and more home-grown talent played a big part, but also increasing levels of production coupled with a new confident group of MC’s seemed to give a glimpse of better days. Of course, the cocky bastard that is me would never openly admit to personally feeling it was a false dawn (told you so squared). Three years later, the UK hip hop scene isn’t actually that much different â€“ like a high school couple groping in the master bedroom at a friend’s house party, the MC’s and producers fumble around in the dark unable to flick each other’s switches. The result is music, but not magic. The occasional orgasm hardly ever gets signed to a major label, and the true success stories are a result of Do-It-Yourself (hustling mixtapes, not masturbation).

One of the main reasons for the optimism back then was the hype surrounding Klashnekoff â€“ the Hackney born hard-hitter hailing from East London. For once, a promising MC was left alone to ride over a collection of ten banging beats â€“ and the result had the streets on smash. His style genuinely was raw to the core, coupling a present-tense bleakness with hope for the future. More than that, he had skills, an immediately identifiable voice and an amazing singing voice for choruses. Not in the cheesy 50 Cent way, no. More like a preacher out-calling the church bells of his parish, drawing worshippers at will. The album was a long time coming, but it was worth the wait â€“ ten tracks, four skits of almost undiluted quality.

After the introductory skit, “Zero” comes into play. Klashnekoff immediately sings acappella, Lewis Parker drops a sick head-nod beat, and the fire spreads uncontrollably. You know you’re in for something special â€“ but the heat only escalates. The next track, “Its Murda”, received blanket airplay on all urban radio stations and TV channels â€“ late-night, of course. A song like this could never be watered down for commercial release:

“It’s K… Lash your rasclat Nek Off
I’ll split you in half like a gun blast from Lennox (Lennox!)
Hotter than flammable rocks
From the manor when man are animal yammin you like fox
Experts slosh we specialize in handling kop
With man’s hatching and planning plots looking to jam in your spot
But their stamina’s not up to par get ripped apart like red Rizla tarars (ras claat)
…I read auras and books written by forbidden government authors
Infiltrate your borders like ITN reporters – then return with the slaughter
Captured on camcorder I’m trapped in a damn corner
Chatting to Pandora bout boxing a man for her
But she don’t know me â€“ Klashnekoff
That black cunt from out of stokey
Banana boat mango munching monkey, kick off your door like jumanji
Dash you off the 28th floor like it was bungee, I want the blood cleaned”

These lyrics paired with incredible production from Harry Love result in one of the true untouchable classics of UK hip hop. Even if you’re not familiar with the British references, you’ll still be able to recognize the quality â€“ that theme continues into “Jankrowville”, the first song that I heard from this rapper. The production from L.Dolo is a simple but melodically effective piano loop, allowing the shine to remain on the MC. Engineers may be throwing themselves off cliffs when judging the audio quality of the vocals, but it adds even more appeal â€“ this truly is the rawest song. Next up is “Parrowdice”, my least favorite track on the album â€“ obviously, it is still pretty damn good, and nicely sets up the next song, possibly the best beat on the LP. Joe Buhdah deserves mad props for lacing “B 4 U Die” with the lushest strings ever sampled and a kick/snare roll to literally die for. The MC could have spent the entire song rapping Celine Dion’s greatest hits â€“ it STILL would’ve been fire. Luckily, K-Lash spares us that torture, instead bringing along his Terra Firma colleagues Skriblah and Kyza.

The second half of the album kicks off with “All I Got” (Joe Buhdah really does have his strings game tight), before a somewhat calculated risk just about pays off â€“ “Black Rose” is a solid song, and really is probably the only tune on here which would definitely leave the listener to decide precisely how dope it is. The sequence until the end of the album now reads: skit, track, skit, track, skit, track. It is not the best way to end an LP, and unfortunately stops the flow of the album. Yes, the skits all make a strong point, but it simply feels too stop-start. Luckily the songs are good enough to carry it through â€“ “Our Time” really reminds me musically of 2 Pac’s “Lord Knows”, in the best possible way, as Lewis Parker gets his West Coast on. The noisy posse cut “Daggo Mentality” is followed by the candlelit closer “Son of Niah”.

It seems that everyone in the UK constantly frets about the state of hip hop. In the US, hip hop may be dead, but at least it still succeeds commercially â€“ but in Britain, there really are so few commercially successful hip hop MC’s. Me? I don’t fret. I get frustrated, sure â€“ but I never panic. Why?

Because albums such as “The Sagas Of…” prove that there are instances where strong MC’s can hook up with a group of talented producers, and someone amongst them can executive produce a short, sharp shock of an LP which is consistently brilliant throughout. These occasions may be rare, but at least once, one summer, such an album really did set the streets alight. It happened, I was there!

The issue in the UK is not talent â€“ that has always been present. Do I think that people could work on their flows? Yes, but that has steadily been improving â€“ someone like Sway actually has a very polished flow, and lyrics have never been an issue. People complain that the public don’t support their own, but how many excellent options do they actually have presented to them? No, the issue is that â€“ for whatever reason â€“ MC’s and producers can’t find each other, and subsequently release hot singles and albums. It is that simple. That is why I don’t panic â€“ with GPS navigation systems becoming so popular, they have got to find each other someday soon…