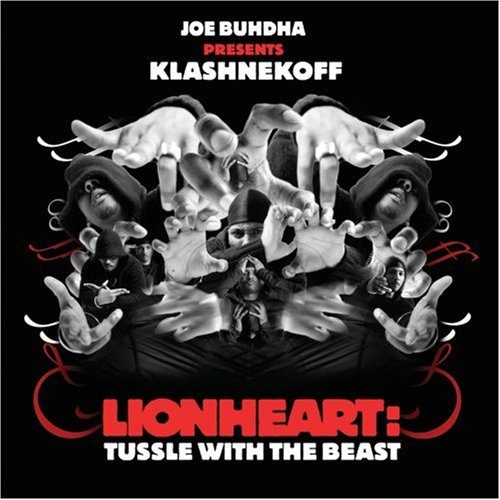 Klashnekoff :: Lionheart: Tussle With the Beast

There are various ways to address the “tricky second album” that everyone seems so concerned with nowadays – perhaps because artists are generally one album wonders now more than ever. You could take the M.I.A. or Coldplay route – which is to use the confidence gained from your first success, and making a brash and expansive follow-up. Kanye West got behind the wheel of a steamroller and crushed his way to the top with four massive singles on “Late Registration.” Nas’ “It Was Written” is generally seen as a failure of sorts, simply because it didn’t live up to the ridiculously high standards of his carefully put together debut. And Klashnekoff? Well, after a long wait, he – rather riskily, it must be said – decided to make his ENTIRE sophomore album with ONE producer – one of the true rising stars of UK production, Joe Buhdha.

Imagine, in an albeit watered down way, that “It Was Written” had been entirely produced by DJ Premier, and that it is similar to what we’re looking at. In fact, to give the album the actual long-winded title: “Joe Buhdha presents Klashnekoff – Lionheart: Tussle With The Beast.” With the benefit of just over one year of hindsight – the LP was released in February of 2007, nearly three years after his excellent debut “The Sagas Of…” – not only can we analyse “Lionheart,” we can also view the aftermath of the impact it had on the game in the UK. After all, his debut tore the streets up back in 2004, and anticipation reached fever pitch in advance of this effort. Except it didn’t, not really – the gap was too huge between releases. Three years is a LONG time in hip hop, and the kids had found new heroes. Kano, Sway, Akala, Dizzee, all cementing their place… More importantly, the rise of Grime started to bury UK hip hop alive. Nevertheless, it is fair to saying that the official return of Klashnekoff was being met with great interest.

Confidence and brashness can manifest itself in different ways – but not all are suitable for the “tricky second album.” For example, a more expansive sonic soundscape is admirable – preferable, even – but dipping your toe into too many genres can destabilise an album. Balance is the key, and unfortunately this LP doesn’t quite manage it. There are no wack beats on here, per se, but that is not to say that there are many great ones either. The opener is a perfect blaxploitation track, the excellently understated “The Revolution.” A couple of tracks later, Kool G Rap blesses the mic with a guest verse to die for, as they “Terrorise The City” over a hard throwback instrumental (think “Made U Look”). A few more solid tracks, like “Sayonara” and the steel drums of “Bun Dem” give the album elements of depth. But the “Black Rose” follow up “Rest Of Our Lives” doesn’t quite work – it isn’t the concept, it is the execution. The average music behind “Can’t You See?” doesn’t help matters – again, it might not be trash, but it does nothing to further the album’s quest for greatness.

So Joe Buhdha presents a mixed bag of beats, all ranging between 6.0 and 8.0. What of the MC? Over the past year, since the release of this LP, much debate has raged when comparing K-Lash’s performance to that of his debut. The rawness has generally dissipated; the anger at his life and “Sagas” has now turned into fury at society, contrasted with the betterment of his own situation. In other words, listeners want to listen to someone going through the hard times they might going through – but what happens when that artist finds success, grows up and moves on? It is a conundrum that Biggie addressed so wonderfully on “Life After Death” – the highs and the lows all encompassed in a perfect song title, “Mo Money Mo Problems.” It is fair to say that Klashnekoff addresses some of these issues – Stephen Lawrence’s death, his own personal life getting better, issues in the black community. But he doesn’t really do so with any great PASSION, and that is the crucial ingredient missing from his delivery, and ultimately the greatest problem with the album.

Whilst “Lionheart” is a measured follow-up, pretty much consistent from start to finish, it lacks the passion that made his debut light up the streets. Whilst M.I.A. came back with an improved delivery on “Kala,” it never doused the flames of passion that prove so crucial to artists of her ilk. Again, this album isn’t terrible – and it certainly isn’t the train wreck that Akala’s miserable sophomore “Freedom Lasso” proved to be. But artists like Klashnekoff are so enthralling when they make you FEEL what they are saying. You could listen to this album fifty times, and still feel the same reactions all the way through, every time – it doesn’t contain peaks and troughs, his flow and lyrics are solid but don’t grab you by the throat. Nobody was asking K-Lash to remain in a 2004 time warp – just remember that his greatest asset was bottling lightning and thunder, and unleashing it in the booth. That never happens on this solid but unspectacular follow-up. As for the effect it had on the UK hip hop scene… What effect? It came, it went. It wasn’t being blazed from every car on the street, it didn’t spawn a legion of new followers and it missed the opportunity to be possibly the biggest UK hip hop sophomore album ever. It may not have been a total slump, but it was definitely a slip-up by Klashnekoff’s standards.