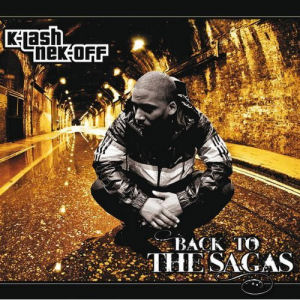 Klashnekoff :: Back to the Sagas

To this point Klashnekoff albums have been the sole domain of fellow RR writer Jesal ‘Jay Soul’ Padania. Given Jay’s in the UK and that’s where the rapper pronounced Kah-Lash-Ne-Cough has made his name and fame it made sense to have Mr. Soul broaden the horizons of our readers by reviewing his albums. As it’sUK Month at RapReviews.com though it makes evenMORE sense for me to broaden my own horizons by reviewing his newest album “Back to the Sagas,” a spiritual successor to “The Sagas” back in 2007. That’s not to say I haven’t been listening to K in the interim – in fact RR has featured several of his songs on Hip-Hop Shop since the show debuted.

Klash has always struck me as a British hip-hopper with some Jamaican twang to his flow, not unlike Toronto’s own Kardinal Offishall. Anyone who suspects they might be put off by a rapper with a strong British accent only need think of any BaKardi song to instantly realize that he’s pleasant to listen to on the M-I-C. Klash hails from the same borough (Hackney) as Edgar Allen Poe, and some of that spirit has clearly passed down from ancient times to the modern day. Klash and fellow rappers K9, Skriblah and D.Ablo talk about the dark and foreboding streets they come from on “Tek Time”:

“Tek time, like he back to watch
Do dirt and you’ve got your own back to watch
Youth swapped their school bags for a bag of rocks
And now they’re addin up the math, ran the back of blocks
It ain’t right, but they do it still
No hype, this is life, no movie reel
[…]
I step to the track swinging like a Louisville slugger, I hit home runs
That’ll leave your dome slumped like a chrome gun
Dem men a suck like a foam sponge
So there’s no point dissin; advice fam
that’s like tryin to smoke the ‘dro with no lungs
Or tryin to spit bars, with no tongue”

The eerie backdrop and haunting chorus create a compelling cinematic visual that completes the picture, but Klashnekoff is not necessarily a dark and dour rapper. “Paper Up” shows a more hopeful side, as you’ll either feel like you’re up to bat with the aforementioned Louisville slugger or attending church service on Sunday morning. The beat switches up and the rap finally comes, a smooth swinging bop, while cleverly Klash vows to overcome negativity and poverty:

“Oh-nine get your paper up, fuck beggin from a paper cup
While the politicians still stay corrupt
That’s why most men are wakin up, blaze the bud
Think of ways to waste the judge
But why waste a slug?
When you know dat, long term prison ain’t the place for us
But plenty times I been placed in cuffs
Beaten in the back of the van, to the station where they take my mug
Yeah they take the piss, so we give them shit
We should take away they guns, and give dem whips
Cause four thousand years been the same predicament
Government’s been breakin our backs and our ligament
But ‘Lash is too militant, to let the innocence
of the infant simply slip through my fingertips”

There are plenty more songs to enjoy on this 15 track release though. While occasionally the beats border on simplistic on tracks like “Raw,” that only makes it easier to pay attention to the sharply written K-Lash lyrics, as he flips the word in reverse and talks about unnecessary bloodshed even while “fighting demons with swords.” Klash has a penchant for the dramatic which serves him well, as it makes him a rapper with more to just say than how great he is or how big of a car he can afford. “Somebody Tell Me” is the plaintive hope of any ghetto youth from Brixton to Compton, looking for a better world than the one we live in even as guest MC Wretch 32 questions whether they should have been born in the world at all. Listening to songs like “Soon Come” is the answer to that question – the beat is banging and heavy, the patois flow and accent are thick (it’s always “t’ing” and never “thing” when Klash gets rolling) but even if you can’t follow every word you’ll headnod to the beat and the rhyme. Klashnekoff is the modern day world rapper who is a local favorite and an underground sensation in every other nation. His time shall soon come to be more than just Hackney’s favorite hip-hop son.

Klashnekoff :: Back to the Sagas
7.5Overall Score
Music7.5
Lyrics7.5