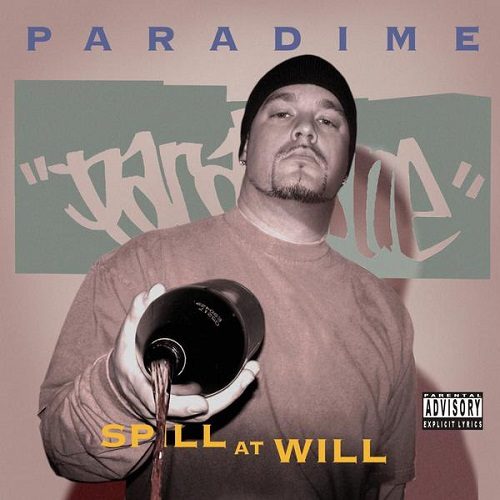 It doesn’t pay to be on the frontline of the Industrial revolution. Great Britain got stuck with a boneyard of steam machines once America and the US corrected the technique. Paradime, an Irish-bred rapper out of the Midwest Motor City, has been pushing tapes out of trunks since the early nineties. Eminem just sued Apple for the copyright of his iTunes songs for the second time. Kid Rock, who started out with The Beast Crew in a Detroit suburb, only performs in football stadiums these days and goes by the alias “Rock N Roll Jesus.”

“Spill at Will” is Paradime’s fourth official LP -if you don’t count his trunk retail operations- and has been released through his own Beats at Will Records label. Outside of Detroit, he is mostly known for being ghostwriter and DJ for Kid Rock. Within his hometown city limits, the MC with Freddy Beauregard on his birth certificate is one of the most popular performing artists. His debut album “Paragraphs” was the best selling hip-hop album in D-town at the turn of the millennium. He has been chosen as Outstanding Hip-hop MC at the Detroit Music Awards so many times his Special Honoree-title barred him from the contest this year to give new blood a chance.

Like a blinking neon sign outside a locals bar a Jim Morrison sample asking to “show me the way to the next “Whiskey Bar”” indicates in which direction “Spill at Will” is about to head off to. Headbanger guitars are smashed into a loop after the conceited Doors Fender Rhodes keyboard has faded away. “They Already Kno” lets host Paradime explain that this “chubby motherfucker with a steel dick” goes to “clubs to get drunk, fight, and blow herbs.” In between these bars, he sings an infectious hook like Everlast did after he switched to his bluesy alter ego Whitey Ford.

Paradime’s rhyming style has a remarkable resemblance to the House of Pain frontman before he traded in his mic for a guitar. His snappy, Marlboro-ridden voice can get mean from time to time, but the good-spirited talk about old times, delirious bar brawls, and the traits of his Irish heritage dominate throughout the album. One of the standout tracks “Spill at Will” is the nostalgic saloon piano track “The Days”:

“Slick Rick, Doug E. Fresh, Big Daddy Kane, and KRS
They was the best to me
In this point of my life, way before I ever touched no mics
When I rolled BMX’s, scrapped the lunch
French kissing, titty grabbing in the back of the bus”

Not only do his words warp back to the early nineties, but his straight-to-the-point bar structure and humorous outlook on life reminisce of the golden era of hip-hop he grew up with. “Irish Eyes,” a bagpipe brawler with a slow marching drum beat lacks a proper backdrop, but does explain crystal clear what kind of rhyming Paradime has developed over the years. Because he strings his syllables tightly together, the D-town favourite sounds simpler on a first listen than he actually is:

“Bow down to the foul-mouthed, mouth like an outhouse
Connected a Detroitan, like the light sounds
Making crowds bounce up and down
Make ’em go soak their silkies
Rugged chubby Irish cat, but the flows is milky
Yessir! The flows is filthy
Till they kill me I’ll be on tilt, built to fill seats
The backbone’s back home to crack domes open
And leave my foes in bleeding clothes”

Next to the guitar-infused material on “Spill at Will,” the Detroit veteran occasionally ventures into more club oriented tracks. The sandpaper-polished vocals on “Last Call” are unaltered, but Trick-Trick’s synthesizer keyboard and cheesy sound effects make the green and orange blend into grey. The aggressive cuts and bass line on “Ruude,” with Marv Won and Stones Throw-signee Guilty Simpson are more effective, but this time the MC’s drop the ball. When Kingston meets Ireland on the slow “The Reaper” the album’s pace falls short. It could have been a nice break from his brew rhymes, but blue lines like “People say I’m paranoid/Cuz’ I’m hearing voices/And here ain’t no joy left in my life, only voids” not only break the spirit, but are a direct violation of the movie sample on the earlier “Irish Eyes”:

“We’re real Irish. We’re not like that fake, new generation, faggedy Irish, you know what I mean. I know you guys are like: I have my feelings and you talk it out. We don’t talk it out. We find out who’s responsible, find the person and beat the living shit out of him.”

Except for the odd misdemeanor, “Spill at Will” is filled to the felt rim with witty punchlines, well-crafted rhymes, and guitar beats that fit their owner, and even sung choruses that do not make the MC sound like Big Shug. Shout outs in the liner notes to Paradime’s therapist and his grandmother show an old-fashined sense of humour in a world where many are about copyright infringements and project overhead.