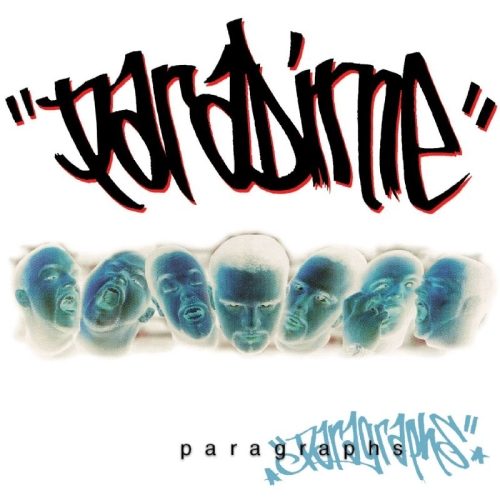 Who sells the most rap records in Detroit? I think it would be a safe bet to say Eminem, followed by a bunch of other national chart favorites. But since D-Town is known for supporting its local talent (Esham, ICP, Kid Rock), let’s hope fellow Rock City representative Paradime was able to sell a decent number of units of his 1999 album “Paragraphs” as well. Because there’s little fault to find here. “Paragraphs” contains everything a fan of well-crafted beats and rhymes could wish for. Going seamlessly from one style to the next, without once forsaking his trademark funky swagger, Paradime, assisted on production by Hush, AMF, Denine and House Shoes, serves up some serious headnodders.

“I Know What You Did Last Summer” uses the horror movie title to dismantle the plethora of lies that MC’s tell (“I saw you dropping off your kids / but you said you did a bid / bringing your wife to your shows / but still you claim you pulling hoes”). “Ode to Guiness” sees him professing his love for the Irish beer. Somebody call the company, because Paradime sure deserves an endorsement deal for lines like “The glass be lookin’ at my hand like, ‘Man come on, hug me’ / Guiness, you beautiful, I don’t care if they say you ugly.” “The Pick Up Line” describes what happens when Dime has had a few too many and switches to his Chunky Jon B persona, enticing ladies with alcohol-induced candour:

“Fire & Ice” finds him waking up in the morning, wondering what his Dr. Jeckyll-type alter ego Stank Breath has been up to this time, entering an entertaining dialogue with his unpredictable dark side.

Adding a healthy dose of humor, and basically just rhyming and styling, not trying to do the impossible but relying on tried and tested concepts, Paradime delivered a rock solid album with “Paragraphs”. Which at times seems to embody 1990’s hip-hop at its best. The tracks rub against your eardrums, causing your head to nod and your body to vibrate with that special kind of groove that I always felt sharpens your senses. It’s a hip-hop thing, I hope you understand. The scratches provided by DJ Mark EP and AMF support that notion. The nineties especially come to mind with “The Pick Up Line” and “Same ol’ Same” with its horn sample wrapped around the booming beats. And check “Grey Matter” (f. TelepathMath) and “Clash of tha Titans” (f. SUN, Bugz, Invincible, Bizarre) for some tantalizing tag wrestling.

Lethargy clearly gets the boot while energy plays the forefront on this release. If it’s about rappers, Paradime comes out swinging (“Who Want Some”, “C’mon After Ya…”), and that’s basically a posture he maintains throughout. But the attack is always cleverly calculated, never just on some breaking-down-all-barriers. Whether rhyming around the sharp edges of “Broke” or reflecting philosophically over the bluesy “Same ol’ Same”, Paradime seems at ease on any beat.

There’s not much fast-forward material. Even the “Guiness Reprise” is fresh. “C’mon After Ya…” (based on a Canibus quote) may be a bit too nervous, “Ain’t Gonna Stop” (“This is still Paradime, just on a different level”) feels somewhat out of place with its club theme, but other than that, “Paragraphs” is the shit.