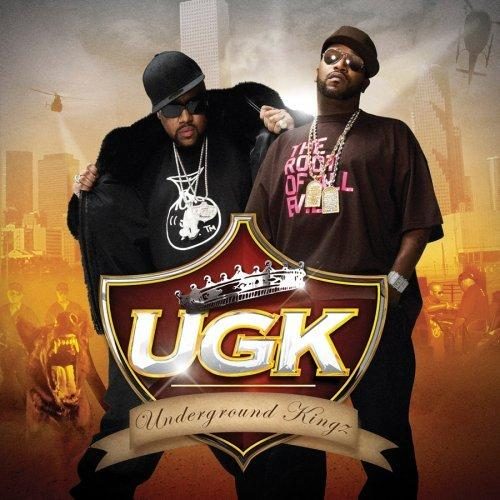 Many rappers or duos have claimed to be kings of the underground in the last 25 years. The problem is that “underground” is itself a somewhat nebulous term. WhatIS underground? Does underground mean doing an album that’s critically acclaimed but sells poorly? Is underground a certain style of rapping and production that’s clearly antithesis of “overground” pop music? Do you actually have to BE underground to make underground music? Even if that last one seems patently absurd at face value, there’s people who will argue it’s essentially true, as the best underground records come from recording studios in smoke-filled basements.

Whatever underground is one group has consistantly claimed to be it over the last two decades, and that’s the Port Arthur, Texas rap tandem of Bun B and Pimp C, better known as UGK. Spell it with or without periods between the letters, it matters not to them, it’s an abbreviation for “Underground Kingz” either way. Before you argue that would be “UK” I think you’ll realize the rappers never wanted to be confused with the United Kingdom, so they had to put a G in it. UGK has been all about putting the ‘G’ in hip-hop ever since they first splashed on the scene with a “Pocket Full of Stones.” UGK defines their underground with country accents, raps about hustling and struggling, and a distinctive vocal pairing between the high pitched C and the deep voiced B. Unintentionally cursed by their own name, UGK was popular among hardcore hip-hop fans but seemed to always fall short of mainstream success. Just when things seemed set to jump off after dueting with Jay-Z on “Big Pimpin'” the group went on hiatus as Pimp C had to do a bid in prison. Man – UGK couldn’t win for losin’.

In 2007 there are no such impediments to UGK’s success. They’ve long since been established as veterans of the rap game, so there’s little to no doubt that their sound and steelo work. Nobody in the group has any legal problems right now, so other than an escalating feud between Lil Troy and Pimp C, there’s nothing stopping the group from touring and supporting a new album. Even when UGK couldn’t record or tour together, Bun B kept the group’s name in the public eye with lots of guest appearances on other records, shouting out “free Pimp C” every time. The perfect storm has now arrived – for once everything is going UGK’s way. They’ve even hit the mainstream in a big way with the lead single off “Underground Kingz,” the suave Juicy J produced “International Players Anthem” featuring OutKast:

Pimp C: “My bitch a choosy lover, never fuck without a rubber
Never in the sheets, like it on top of the cover
Money on the dresser, drive a Compressor
Top notch hoes get the most, not the lesser
Trash like to fuck with $40 in the club
Fuckin up the game, bitch it gets no love
She be cross country, givin all that she got
A thousand a pop, I’m pullin Bentleys off the lot
I smashed up the gray one, bought me a red
Everytime we hit the parkin lot we turn head
Some hoes wanna choose but them bitches too scary
Your bitch chose me, you ain’t a pimp, you a fairy”

Bun B: “Baby you been rollin solo, time to get down with the team
The grass is greener on that other side if you know what I mean
I show you shit you never seen, the Seven Wonders of the World
And I can make you the eighth if you wanna be my girl
When I say my girl I don’t mean my woman, that ain’t my style
Need a real street stalker (stalker) to walk a green mile
We pilin up the paper on the dinin room table
Cause you able to realize that I’m the truth and not a fable
We rock the freshest sable, keep that ‘chilla on the rack
What I look like with some thousand dollar shit up on my back?
I’m a million dollar mack that need a billion dollar bitch
Put my pimpin in your life, watch your daddy get rich”

There have been plenty of rappers to ball, floss, earn money and get rich over the years. UGK easily distinguishes themselves from the pack. Pimp C lives up to his name by being very crass and matter of fact with his game, while Bun B keeps it smooth and talks a girl straight out of her drawers by promising to treat her like a princess. It’s that dichotomy that fuels the uniquely pleasurable experience, the yin and yang of their underground game. Throughout the first disc of “Underground Kingz” that dynamic comes into play time and again, with B and C always complimenting each other and never ending up at odds. They update the old school classic “Life Is…” with Too $hort for the 21st Century and it sounds flyer than ever. When they say everything is “Gravy” over a slow-rolling AVEREXX track, the rap pours all over the musical biscuits and mashed potatoes lovely. The Runners help UGK “Take the Hood Back” with a high intensity attack of big bass, freaky synthesized melody, and guest stars like Slim Thug and Vicious. Even when you think they’re going to take a break and ease up on the musical dopeness, they simply SHUT SHIT DOWN by declaring the rap wars over – collectively or individually they let it be known that “The Game Belong to Me”:

Pimp C: “I’m still that young boy that had a pocket full of stones
but now I’m sick and simply rich, grippin wood and flippin chrome
I got Bobby by the pound, Whitney by the key
DJ Screw by the gallon, bitch the game belong to me”

Bun B: “Man I pull up in your city and get my Bush on (what is that?)
Lay down the competition, take their cash crops, and get my push on (huh)
Moved up to Bentley with more chrome from a Lexus key (key)
All because we cornered the market on that Texas tea (tea)”

Even though disc one alone could have cornered the market on hip-hop from North to South for most of the remainder of the year, UGK believes there’s no doing it likeOVERDOING IT. After waiting six years long years for a new group album of original material, why not put it all on the line? Therefore it should come as no surprise UGK would double disc “Underground Kingz” and come back with 16 MORE TRACKS, over an hour of additional content. This isn’t UGK on some “we released a insert with three extra songs to fuck up the bootleggers” shit, or UGK on some “if you like the first disc check out the Chopped & Screwed mix on the second” shit. No sir – this is all original content, brand spankin’ new, and one could even argue that while disc one has shit on lock that disc two may ultimately prove to be the breadwinner. Some songs here are undoubtedly what you already know or would expect – Charlie Wilson crooning on the Pimp C produced “How Long Can it Last,” Jazze Pha getting his Jazze Phizzle on for “Stop-n-Go” and smooth odes to shiny rides like the Scarface laced “Candy.” What youWOULDN’T expect is for UGK to get down with Dizzee Rascal and Pimpin’ Ken on “Two Type of Bitches.” Go ahead and read that sentence again – let it sink in. Matt Jost wrote an excellent review in June of this year on the British rapper’s latest album “Maths & English.” BRITISH. Turns out Pimp C and Bun B are trying to put the UK in UGK after all! It’s disconcerting at first to hear his European accent ripping over a classic slow-grinding 70’s blaxploitation groove courtesy of MoMo, then it’s instantly the coolest shit in the world:

Dizzee: “Bitches not flexin ain’t much good
I should and I would keep clear if I could
But when I do I just CAWN’T get away
Cause I gotta fuck AWL day every day
Dat leaves me run loco for real
All deez chickenheads lie about deal
Ain’t gotta do it up to make me chill
Find a good spot on the floor and kneel!!”

Now THAT is some international pimping. The surprises don’t stop there. Could anyone ever have reasonablu conceived that a rapper who has been pigeonholed (probably against his will) as being a concious righteous MC like Talib Kweli would get down like a pimp? Fuck whatever you thought, game recognizes game, and UGK makes it smooth with Kweli and Raheem DeVaugn on “Real Women.”

Kweli: “I’m ’bout to spoil you, show you my gratitude
I love the all of you, even your attitude
Never gonna give you black-n-blues, that’s abuse I’m not that dude
Take it back to when I held yo’ hand and my name became yo’ back tattoo
I love the fact that you, don’t need me to make you whole
Doin it fast or takin it slow, you don’t wanna let me take control
[…]
How I love to dive inside them thighs, I love your cockiness
Ain’t gonna ask if you roll in rap, you know this right, it’s obvious
I’m an Underground King, with a winner down Queen, I’m fin’ to let her know
This ain’t about bling, this ain’t about cream, I never let her go”

It fucks your whole head up to hear Kweli spitting game triple time like Z-Ro or Twista, but he’s not playing false with it – the rap is 100% legit and on beat all the way. The biggest surprise of all may be “Next Up,” a 2007 version of “The Symphony” featuring – you guessed it, Big Daddy Kane and Kool G. Rap. God damn – forgive the pretense of being objective about hearing this, I’m open like a hooker on the first of the month. Even though UGK is in danger of being upstaged, Pimp C and Bun B lay their mack down so strong that they hold their own and may even outshine their fellow legends:

“Bun beat it I’m best ever, breathin or deceased
From the South to the Midwest, Cali to the East
Go to any city nigga, and ring my name up
I bet I eat the best rapper they got in the game up!
Call a nigga up, e-mail him or chirp him
Make a meal out his motherfuckin ass and then burp him
Don’t fuck around, I’m not your lil’ homey
I’m the King of the Underground, so act like you know me!”

The dopeness of “Underground Kingz” would be hard to summarize in a review twice this long. It never fails – no matter how thorough you are someone’s going to say you didn’t mention “Still Ridin’ Dirty” with Scarface, “Trill Niggaz Don’t Die” with Z-Ro, or a track like “Cocaine” with Rick Ross where they break down the use of the drug in “legal and illegal industries” for centuries on a highly sophisticated level. Just accept that there’s nothing wrong with your favorite song if it wasn’t mentioned in this review. Matter of fact accept from the start that UGK have released that rare hip-hop double album that is NOT too long or bloated. This shit is just right and it’s supertight. It’s been a long time coming for this day but “Underground Kingz” not only reaches but exceeds expectations in every way. From the North to the South and all points worldwide, this is the UGK album they’re going to be talking about for years to come. The legends have come home and they’re sitting high on the throne.