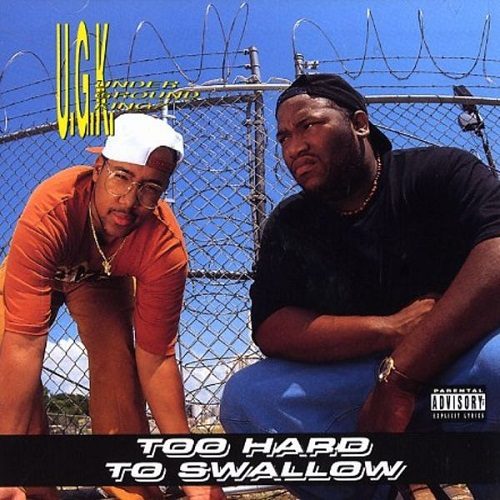 Too Hard to Swallow

At one point Jive Records was considered one of the top hip-hop labels around. It’s hard to believe that the home of acts like Britney Spears, N’Sync, and The Backstreet Boys once boasted a line-up consisting of KRS-One, Whodini, E-40, Spice 1, and A Tribe Called Quest. The label’s success always relied on taking chances. Apart from signing hip-hop acts, Jive went one step further and took chances by expanding past the east coast. One of those acts was U.G.K., a duo consisting of Pimp C and Bun B and hailing from Port Arthur, Texas. To say signing U.G.K. was a risky move would be a massive understatement. Not only did the group hail from the south during a time when East Coast rap reigned and West Coast rap was beginning to take over, the group couldn’t even boast the big city affiliation of groups such as The Geto Boys. Further complicating things was the fact that Pimp C and Bun B were still in their teens. The risk taken by Jive Records stops sounding illogical with one listen of their major label debut, “Too Hard to Swallow.” A mix of original material and cuts from the first UGK record (the obscure “The Southern Way,” released on Big Tyme Records), the album was a healthy helping of thick southern funk that showcased the group’s musical and lyrical ability. Though UGK never reach platinum status, they arguably became Jive’s premier hip-hop act by being able to consistently sell hundreds of thousands of records with little promotion or radio play.

UGK’s success was based on their ability to be gangsta but not necessarily hard core. In an era where acts like N.W.A and Geto Boys ruled due to the controversial nature of their lyrics, UGK presented a more ingestible brand of gangsta rap. “Something Good” is the perfect example as Bernie Bismark’s smooth manipulation of Rufus and Chaka Khan’s “Tell Me Something Good” is paired with Pimp C and Bun B’s street lyrics:

Pimp C: “One with a trigger, two with a bat
Three big brothers four
Wanna squab with me, so I guess a brother gotta throw
Tell ’em like this ya better get up out my camp dude
Before I have to pull a gat and get real rude
I don’t figure that it’s worth gettin’ hurt
Just cuz ya gal wanna give me that skirt
Bet it feels funny when ya doin’ 69
Knowin’ that ya sippin’ on all my jimmy wine
And when ya get a kiss, do ya feel bad
Knowin’ that ya swallowed on a skeeter that I had
You wanna step to me but I don’t really think you should
I shoulda shot you up instead I told ya somethin’ good”

The funk laden formula continues on “Use Me Up” as Pimp C flexes his skills behind the board crafting another hit by borrowing from Bill Withers’ “Use Me Up” and showing his more vulnerable side. One of UGK’s biggest hits comes in the form of “Pocket Full of Stones” where Pimp C laces the track with jazzy trumpets and samples while the crew keeps the topic matter as street as ever:

Bun B: “When I first started back in 1989
I wasn’t moving keys I was barely moving dimes
Started coming up fiends recognize my face
I was paying off the laws so I wouldn’t catch a case
You wanna freebase I got them hovers for your ass
A boulder on your pipe and you feel a mega blast
cash went to stacks, then it went to piles
Thanks to them dope fiends hitting crack vials”

Impressively, in only three tracks UGK had exposed the country to what life was like down in Texas – from making sure you followed the code of the streets to chasing girls to moving dope. If the smooth grooves might have deceived you into thinking things were all gravy in the Lone Star state, UGK dropped a dose of reality on “Short Texas” where Pimp C brashly proclaims:

“I don’t give a fuck who you be!
You ain’t bout to sell no fuckin dope in P.A.T.
You could be Tony Montana in this bitch
Have a boat load of dope, but you still ain’t selling shit
Cause we don’t know your face so I don’t really figure
We gon let you come up and sell dope in Texas nigga”

While The Geto Boys seemed to want to scare America into awareness of the plight in the ghetto and N.W.A. wanted to take the ghetto to the suburbs, UGK could care less what America thought and instead merely wanted to provide a soundtrack for others who lived their lifestyle. “Cocaine In The Back of the Ride” described the all too common predicament faced by many a young minority man in the border state whose Interstate 35 serves as a major pipeline for cocaine throughout the country. “Too Hard to Swallow” showcases the cut throat and fearless attitude necessary to survive in the environment that created Pimp C and Bun B. “Cramping My Style” presents a familiar sample in the Isley Brothers’ “Between The Sheets” while Pimp C and Bun B warn the girls to give them some space as rapper Infinity provides the female point of view. “Feel Like I’m The One That’s Doing Dope” is another standout cut as Pimp C takes the classic line from the Geto Boys “Mind Playing Tricks” and expands it into a six minute journey into the paranoid mind of a dope dealer. “I’m So Bad” is another Pimp C solo track where he lives up to his name, spitting pimp tales over another smooth Isley sample:

“Bitch, I ain’t even tryin to hear that bullshit
About what your ho ass don’t suck and what ya ass don’t lick
So you can get your knees dirty ho
Or either get your ratchet ass out my fuckin do’
Cause I’m Pimp C, I put a bitch in her place
Get down on your knees, I put my dick in ya face
Cause that’s how the shit gotta go, heh
with the average everyday South Texas ho
So bitch what’s up with the suckin action?
Cause my dick need that satisfaction
(Bitch, you ain’t even my type)
Yeah ya momma said that but she still got me right
(Aww nigga my momma don’t even do that shit)
Bitch yo’ momma suck a MEAN ass dick
But I don’t need ya anyway trick, huh
Cause I’m so bad, I can suck my own motherfuckin dick”

Bun B wraps up the album with two solos of his own. The first comes in the form of “Trill Ass Nigga” where he explains the oft debated term which has caught on outside of Texas in recent times:

“I’m just a trill ass nigga walkin down the street
It’s Bun B bitch, the nigga you and your girlfriends wanna meet
My nuts hang to the road
So buck up and get fucked up by the Big Tyme motherload
You better watch that ass when you roll
Ease up on U.G.K. you gotta pay the fuckin toll
And we ain’t hearin that ying-yang
You keep on runnin that lip and watch yo’ ass get slanged
Yeah Bun B’ll talk shit
But if you think I can’t back it up niggaz, try and make a fuckin hit
Pimp C’ll slam you to the peel
You’re layin on the ground, aiyyo Bird, kick him and his fuckin ribs
The U.G.K. posse they my ace boon coons
And we down to let the gat go boom
So call 9-1-1, and let the law scoop yo’ punk ass up
before we make you niggaz shit in your drawers
The life of the trill niggaz ain’t no joke
Cause we down to go for motherfuckin broke So watch out for the niggaz in the khakis
The U.G.K. posse backs me, so don’t jack G
Because the dicks hang low, to any two-bit ho
And I’m about to get some shit on my toes
And I’ma keep on doin it Clyde
The cocaine’s in the back of the ride of a trill ass nigga”

The album ends with “976-Bun-B” where Bun drops a 2 minute plus verse showcasing his verbal skills. The bonus track is Pimp C’s Remix of “Something Good” which is a slightly Screwed version of the original as everything is slowed down.

“Too Hard to Swallow” was a deceiving title to a classic album. Out of all the gangsta rap groups to emerge in the early 1990s, UGK was the smoothest and most accessible. Their content was as street as any other group, but the Texas funk inspired by classic soul and Pimp C’s own musical background made for a smooth listen. To say the group were innovators would be a disservice to the legacy of UGK. From making it cool to be from a small town to showing the world gangstas didn’t have to be angry all the time, the group concocted a formula for gangsta rap (southern and otherwise) that is still being followed to this day. Of course, it is impossible to ignore the fact that it is 2007 and after dropping one of their most successful albums (the instant classic, “Underground Kingz”), Pimp C is no longer with us. To describe the effect Pimp C’s death has had on me personally and on the “million other country boys” that made UGK their preferred music would take up too much time and space. The only bright spot in an otherwise tragic ending to the career of UGK is the fact that it took God’s hand to finally separate Pimp C and Bun B.